The Greatest Showman: A magical tale of triumph 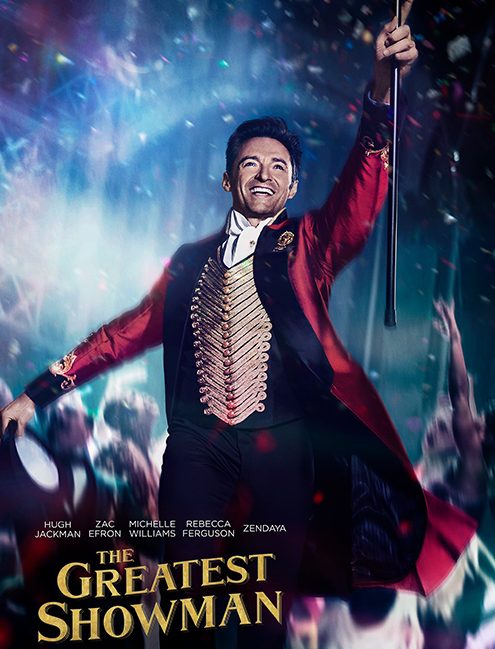 Hugh Jackman as P.T. Barnum in "The Greatest Showman."

A moving film that highlights individuality as well as failures and triumphs, “The Greatest Showman” is an upbeat story set to enjoyable music leaving you wanting more. Never have the lives of misfits inspired us so much. You find yourself rooting for the team that is usually despised in society: the strange looking-outcasts.

This film brings to life the legacy of the Barnum Bros. Circus, and the unknown story associated with it. The actual circus, deemed “The Greatest Show on Earth,” lives up to its name in the on screen adaptation.

The film describes the humble beginning of a circus, originally founded by P.T. Barnum, played by the charming Hugh Jackman. Jackman brings to life the struggles of Barnum and his need to fit in with the upper class while building his dreams.

Although Barnum has married the love of his life, Charity, played by Michelle Williams, he still wishes more for his family. Although Jackman and Williams lack strong chemistry on screen, there is something of a magic connection between them that you can feel.

At one point, the small family is seen on the rooftop of its apartment building. Jackman holds a gift he crafted for his daughter, a spinning light which makes bright yellow figures seem to dance around them. The magic in that moment, and the glints of happiness seen in their eyes is something felt by the audience.

The bright colors and unique, inspiring dance numbers are powerful. The many odd personalities that Barnum employes for his show come as a surprise. Although society sees them as “freaks,” Barnum sees them as opportunities. No matter their skin color, shape, or apparent disfigurement, Barnum makes them feel important. It’s like a call to action in the modern day, to step away from our difference and come together to empower others.

This story is about bringing up seldom-recognized people into figures of legend, a theme in many movies. “Remember the Titans,” the 2000 Jerry Bruckheimer film starring Denzel Washington, has a similar concept, a coach looking for more from his team of underestimated individuals.

Just as with Barnum’s group of circus performers, the young football players integrating the 1971 football team at Alexandria, Virginia’s T.C. Williams High School eventually rise to fame after much struggle and difficulty. It makes the movie somewhat relatable. It doesn’t just show an amazing production rising from the ashes; It depicts the effort put into starting a feat as grand as a circus.

Not only is “The Greatest Showman” is relatable in the sense of hard work, it shows that not all relationships are fairy tales. The coming of a new, and amazingly talented participant in the circus proves to be a distraction for Barnum. His marriage is in jeopardy over an alleged “affair” and his lengthy commitment to the circus, instead of to his wife. This is a real concept brought to life in film. Although the rich and famous may seem to lead whimsical lives, they also have their share of hardships.

Not many films tie in a circus to musical numbers. That’s what proves this movie to be a unique and enjoyable experience. It takes you to another world where you seem to live and breath the circus. I would recommend this movie for anyone looking for an upbeat change in scenery. The film is a treat to watch, as you find yourself falling in love with the characters and the dream. Watching the intricate relationships and beautiful storyline unfold is what makes this movie an incredible and magical journey for all to watch.