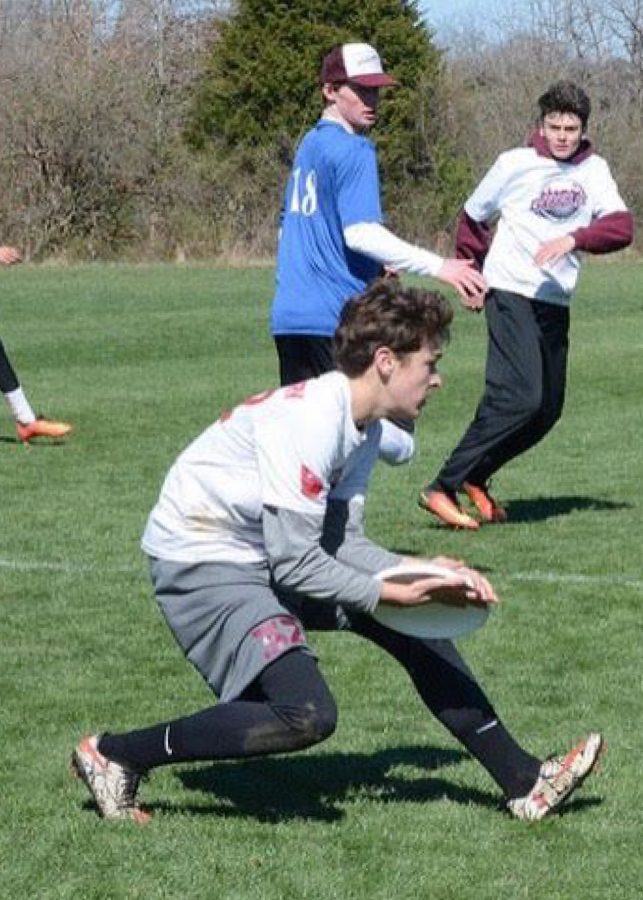 Dusenbury dives for frisbee during practice.

James Dusenbury, or as his friends call him, “Jimmy” is the epitome of a hard working student athlete. He is the member of both a nationally ranked high school sports team and the National Honors Society at Grady High School.

The Grady Ultimate frisbee team finished their 2016 campaign as the #3 ranked team in the nation. Dusenbury was an integral part of their top 5 finish. He plays the “cutter” position, which is essentially a designated route-runner.

“I was inspired to play ultimate by my older brother. He played at Inman when I was younger and it sparked an interest within me,” Dusenbury said. “Ever since I started playing, I have loved it.”

Ultimate Frisbee is not Dusenbury’s only hobby, he says that sports and games are the things that take up most of his free time.

“I’d say I am a solid athlete,” Dusenbury said. “Not spectacular but not too shabby.”

One of the athletic hobbies that Dusenbury enjoys most is Haygood Hoops. He has played for his dad (his coach) since he was in the 4th grade. Haygood is a popular activity amongst many Grady students, who enjoy a short season of competitive basketball in the winter.

“The community that has grown with haygood over the 12 years I’ve played probably put me in the position I am in today, with the future open. The ceiling is the roof for me,” Dusenbury said. “Playing for my dad really makes the league a family ordeal. We all get super excited for each game and it’s the talk of the dinner table.”

For his Haygood league, Dusenbury likes to focus on shooting on offense, and tough defense. During his games, James often wears a headband to replicate what his favorite player, Allen Iverson.

“My game plan each game is to put up a few three’s and hope for the best,” Dusenbury said. “The best part of my game however, is the tough defense I play on the other end of the court. It’s all about the effort.”

Dusenbury plays in a recreational soccer league for fun on weeknights in the spring and fall. The team is coached by a friend of Dusenbury, Cory Dillard, along with his dad.

“James puts in work every practice,” Dillard said. “He is always the first guy to practice and the last to leave.”

Academia plays an important role in Dusenbury’s life and his accomplishments can be seen through his many principal list, and honor roll awards.

“The pursuit of happiness, and money, is what pushes me to strive for academic success. My mom, dad, and siblings (who are both in college) also inspired me to do well in school,” Dusenbury said.

He is targeting the Georgia Institute of Technology as his #1 school of choice. Georgia Tech has always been a dream school for Dusenbury because of his fond interest in engineering and would allow him to go to school close to home for cheap. He finds out the early admission for Georgia Tech later on in January.

“It’s in a great city and it has a superb engineering program that will not only peak my interest but will also help me on my pursuit of happiness and pursuit of money in an engineering career,” Dusenbury said.

Dusenbury also has a passion for debating. As a captain of the award-winning debate team, a lot of his time after school and on weekends goes towards debate. Debate has inspired him and taught him a lot about arguing.

“Debate helped me grow and develop not only my writing skills but also public speaking. I’ve learned that it’s important to listen to what other people have to say so you can properly refute what they say,” Dusenbury said.

Dusenbury hopes that his hard work and dedication throughout his life will pay off, literally. He hopes to be an aerospace engineer after college, and continue his hard work for the rest of his life.

“As 2chainz once said ‘Money’s the motivation, money’s the conversation you on vacation, we gettin’ paid so we on paycation, I did it for the fam’”, Dusenbury said. “Aerospace engineer would be the ideal job for me, it is what I have taken an interest in since I began the engineering pathway.”