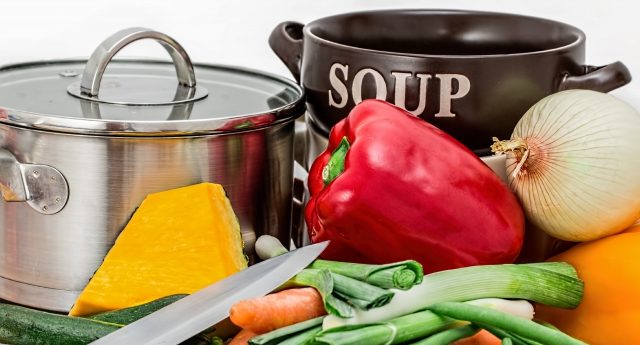 Vegetable soups are staples of many vegan diets.

Many Grady students have recently embraced veganism. Meat, fish, eggs, dairy products and any foods obtained from animals all are excluded in a vegan diet.

“There are three main reasons why most people choose to go vegan: health, animals and environment,” sophomore Haley Henderson said.

Henderson became a vegan after realizing the impact that consuming animal products has on the environment.

“I watched a couple documentaries on the animal agriculture’s impact on the environment and decided, because I think you vote with your dollars, that that’s not something I wanted to vote for,” Henderson said.

Omnivores can cause many environmental issues that vegans can avoid. A recent study from PubMed Central (PMC) showed that omnivores held a larger carbon footprint than that of vegetarians and vegans.

“Greenhouse gas emissions have the largest effect on the environment. More than [nine] percent of it comes from methane, which comes from cows,” freshman Kristen Hart, who has been a vegan for four months, said. “Because there are so many cows being bred, some are kept for the dairy industry and some are slaughtered for the meat industry. The cow’s methane all goes into the air, and it puts a lot of harmful chemicals into the air. Animal agriculture is the leading cause of climate change and greenhouse gas emissions.”

Meat is a main source of protein that is lost with a vegan diet, and vegans must compensate with other food products. The average protein intake for females is 46 grams per day and 56 grams for males. Three ounces of steak contain about 29 grams of protein, which is more than half the protein intake of both an average male and female; however, three ounces of tofu contains seven grams.

“There’s actually a lot of protein in vegetables,” sophomore Nadia McGlynn said. “Spinach has seven grams of protein per cup. I also eat a lot of lentils and quinoa. Soy milk has protein and some is added into typical breakfast cereals. Beans, tofu, and other meat substitutes have plenty of protein as well.”

Veganism comes with many health benefits. Animal fats are excluded in a vegan diet and, according to Medical News Today, animal sources are likely to be responsible for 13 of the top 15 causes of cholesterol-raising fats in the United States.

“I get a lot more vitamins and fiber from all the fruits and veggies I eat, so I have less of a chance of getting a lot of common diseases like cancer, osteoporosis, cataracts or arthritis,” McGlynn said.

However, veganism can also be dangerous for your health, as it can eliminate a lot of fat normally built from eating meat and dairy. Few plants contain iron, so supplements are needed.

“If you’re not careful to take vitamins and eat healthy foods, being vegan can easily be unhealthy,” McGlynn said.

Veganism is built around a lot of negative stigma from others, especially those who enjoy eating meats or dairy products. Many vegans are big animal rights activists, supporting actions to keep animals out of the slaughterhouse, and the average omnivore may disagree to those actions, creating controversy.

“No, [my family is not vegan],” Hart said. “They actually told me not to go vegan, but I did it anyway. Sometimes it’s rough [to be vegan at Grady]. A lot of people make fun of me for it , but I just learn to joke with them about it.”

Some, however, agree to the negative stigma built around veganism.

“I think [the negative stigma is] justified because they’re a lot of obnoxious vegans that perpetuate the stereotype,” sophomore Sadie Bader said.

Choosing to be a vegan is one thing, being born into the diet is another. Veganism transforms your diet as you are told to eat only certain things, unable to venture out.

“I don’t enjoy [veganism] that much, and I do kind of wish I could just have a regular diet,” Bader said. “I don’t want to stand out because of what I eat, and it would be easier to eat out.”

While many see veganism as a diet change, many vegans change their lifestyles as well. As veganism has become more common, businesses have accommodated the increasing need for non-animal products.

“Most of my clothes, unless I bought them before I was vegan, and accessories, are vegan,” McGlynn said. “I buy vegan candles and try not to use things with animal products in them. Depending on what you feel comfortable doing, being vegan does change a lot about the way you live your life.”