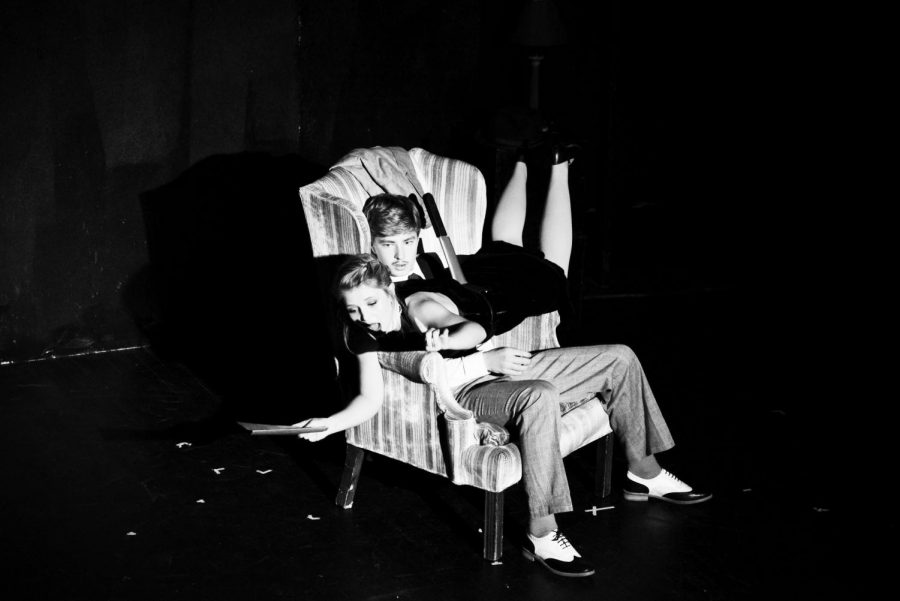 Framed for a murder committed by a German spy organization, Richard Hannay runs from the police in search of evidence to clear his name. So goes the plot of Grady Drama’s fall one act play, “The 39 Steps,” presented from Oct. 19-21.

“We had actors who truly proved themselves,” artistic director and history teacher Lee Pope said. “I was proud of every single one of them. It was Harrison Briggs’ first big lead role, and he basically carried the show. He did a phenomenal job.”

Richard Barlow, playwright of “The 39 Steps,” wrote the show as a comedy. However, its dark plot may have discouraged the audience from fully enjoying its jokes.

“The first night was a little rough,” said senior Viola Fruth, who played Annabella Schmidt. “The show is a dark comedy, so at some parts people weren’t sure whether they should laugh or not. After that, Mr. Pope made sure to tell the audience ‘Don’t worry, it’s okay to laugh. It’s supposed to be a comedy.’ After that, it was really great. Friday and Saturday were both amazing nights.”

Grady Drama performed “The 39 Steps” at the Georgia High School Association (GHSA) Regional One Act Competition on Oct. 28. GHSA requires competition plays to run no longer than one hour.

“Getting the timing completely down was a big challenge,” said junior Olivia Hunter, who played Pamela. “There were moments where we could have drawn out pauses or made moments even funnier than they were, but we were stressed for time.”

The original script of “The 39 Steps” divides the show into two acts, but its early 20th century setting convinced Pope to adapt it into a one act.

“I went through so many different shows,” Pope said. “[Drama teacher Jake] Dreilling, recommended it knowing that I like shows of that time period. It’s a full-length show. I had a heck of a time cutting it down to 55 minutes, but we made it, finally.”

The Grady showing of “The 39 Steps” took place in the black box theater due to renovations in the Murray Auditorium. The theater’s relatively small size placed constraints on the production crew. They designed and created a set consisting primarily of black boxes that changed function throughout the play. An armchair, a theater poster and the side of a train car were the show’s only other set pieces.

“The show had to be adapted to be able to fit into a smaller space,” Lighting Designer, Assistant Technical Director and senior Ali Bouterse said. “We couldn’t have as large of a set because there’s not enough room backstage. There’s also fewer light changing options.”

The relative inexperience of the production crew of  “The 39 Steps” also stood out to Bouterse.

“We had a really young group of techies,” Bouterse said. “A lot of them hadn’t done tech before. We weren’t just teaching them to take a chair off the scene. Instead, we needed to tell them to take the chair off and push the chair all the way back to allow the rest of the techies to come out with their stuff. A lot of them are tiny, so we had to figure who can lift two blocks at a time and who can only lift one thing.”

“The 39 Steps’”cast was smaller than two act plays and musicals. Cast members said the cast size allowed actors to form strong friendships during rehearsals and performances.

“You grow close with certain people in larger casts, but there tend to be groups,” Fruth said. “This cast was really fun. There’s only a few of us girls, and we’d always get ready downstairs in the locker room together. We’d all do each other’s hair and makeup and stuff like that, so we got really close. There’s only a few of us at rehearsal, so we became closer with the boys, too.”