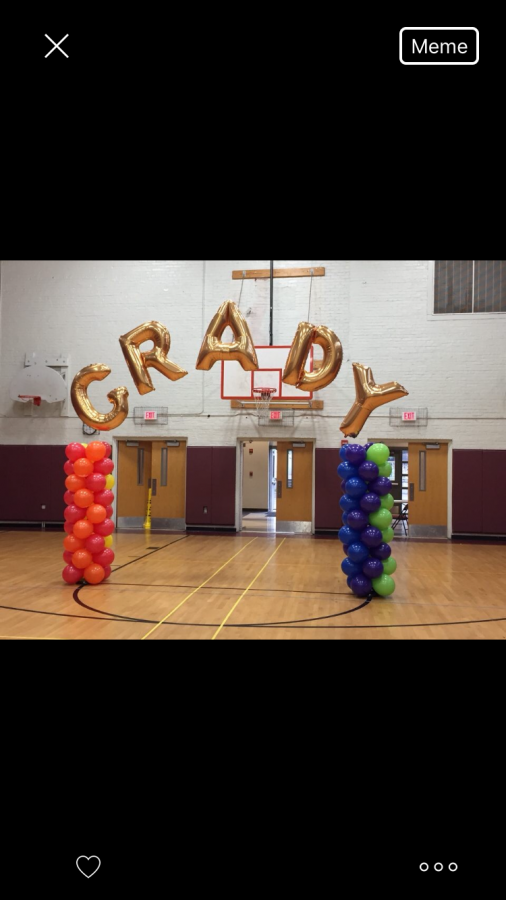 A ballooned arch graces the gym floor before the Oct. 28 homecoming dance.

For years, Grady’s April prom was the anticipated dance to attend. Not many people went to the homecoming dance, nor was it seen as a big deal. However, starting in October of 2015, the homecoming dance saw an attendance increase, as the graduating senior class advertised the dance and encouraged underclassmen to attend.

“Ever since, the homecoming dance has grown since my sophomore year, the whole week has become a lot more exciting,” senior Tappan Wood said. “It makes our school feel like we have a ton of spirit, and everyone loves dressing up.”

Despite growth in the homecoming dance tradition, the old gym was not full the first year the dance “came back.” Students have noticed that at Grady dances, including both prom and homecoming, the hired DJ plays rap music for most of the night.

With Grady lying in the heart of Atlanta, urban culture is prominent. Many students listen to rap music and are up-to-date with the popular dances. Regardless of its large following, some students think this trend is not relevant to the entire student body.

“I don’t think anyone would mind if they played a variety of music at the dance, but the fact that they only stick to one type of music that is deemed ‘popular’ by some students is kind of off-putting to the rest of us,’’ sophomore Avery Gray said. “We can’t really dance to that music unless we know the specific dance.’’

Students who do not listen to rap and hip-hop are hesitant when it comes to the decision to attend school dances. Gray, along with junior Ellie Rice, admit they recently reconsidered their decisions to attend the upcoming homecoming dance on Oct. 28.

Despite the fraction of students who seek music diversity, many students find that it is not a concern.

“For me, I decide whether to go to homecoming based on whether my friends are going and if I think I’m overall going to have a good time,” senior Tyler Hunt said.

For the students who do want a change in the Grady “homecoming culture,” there are ways to appeal to the entire student body, such as including a mix of music genres.

“Everyone has their own music taste,’’ Gray said. “Basically, they should try to play more ‘Top 40’ songs. The school could even send out a request board. I think that would be the easiest way that people could request songs, and that way you are getting a feel for everyone’s music taste.’’