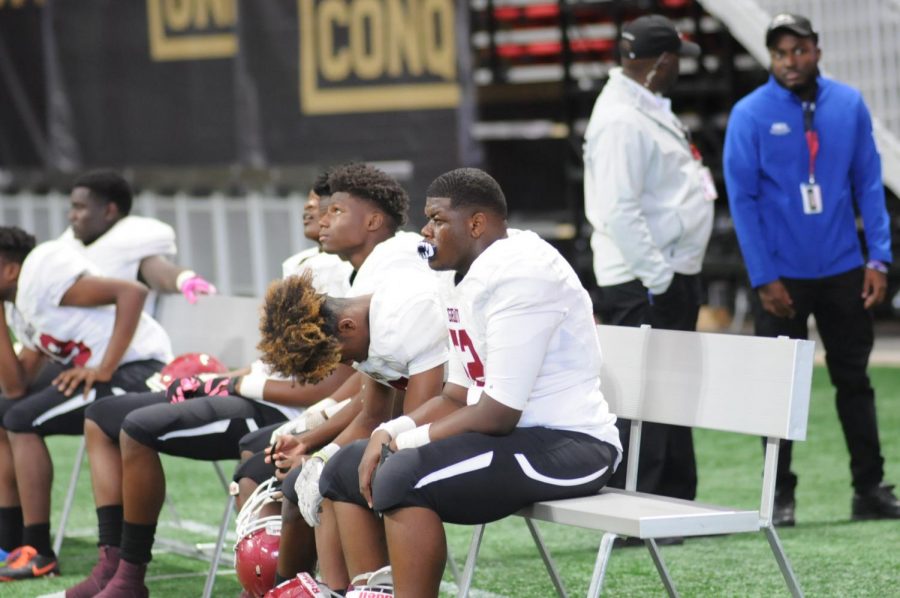 Three Knights show their respective reactions on the bench to the 45-7 scoreline against Maynard Jackson.

By Alex Langan and Sean Sweeney

The Knights football team, whose all time record is 350-363-21 in 71 seasons, enjoyed success in the past two decades, but this year’s team went against the grain, finishing 2-7.

While the 21st Century has been a celebratory time for the Knights, it hasn’t always been that way.  The Knights’ only state championship came 64 years ago in 1953 under future Georgia defensive coordinator and Georgia Southern head coach Erk Russell before the team declined to mediocrity.

“The change wasn’t all of sudden; it was more of a gradual change,” former Grady and Grambling State running back Calvin Colquitt, a class of 2000 graduate, said. “The coaching staff was pretty consistent and Coach [Homer] Hill was no-nonsense. We knew what the expectations were, but it was deeper than football, almost like a family. The goal wasn’t just to win but to go to college, too.”

Colquitt, who transferred to Grady as a senior from Southside (now Maynard Jackson), was surprised when he saw the size of the Knights football players and their effectiveness on the gridiron.

“I was surprised at how small the players were; the guys were so little,” Colquitt said. “We played together, even though we weren’t the biggest or fastest guys. The coaches ran plays suitable for the talent we had. We ran a lot of misdirection, but we still kept it simple. We knew we had to execute because we didn’t want to let down coach [Hill].”

The team finished the 2016 season with a region title following a 10-2 season.  Since coach Earthwind Moreland, former Knights player in the mid 90s arrived in 2014, the Knights have gone 22-16, a win percentage upwards of 57 percent.

Before Moreland took over, Millen accumulated 107 wins, however eight of those were forfeited by GHSA as a result 14 were ruled ineligible for living outside the Grady attendance zone. The closest Grady came recently to a losing season (not including 2013, where the record was technically 0-11 after the 8-3 season was forfeited) before this year was its 2014 campaign, where the team went 5-5 after sanctions from GHSA resulting from 2013 brought the Knights to their knees.

When Moreland took over for Millen, a more laid-back culture prevailed. Players attributed this to the age gap between the two.

“There’s a big age difference between the two coaches; they grew up in two different time periods,” former Grady and current Samford defensive back Jamond Glass, a class of 2015 graduate, said. “Almost everything about them was different personality-wise, but both were loving and caring coaches who had the same best interest for all their players. When [Moreland] took over he took the initiative to make football fun. Coach Millen did the same thing, but Moreland took it to another level which, was good for us players. With it being fun, things kind of did from time to time get a little unorganized, but not too unorganized if you know what I mean. Football was less serious and more enjoyable and relaxed.”

The relaxed culture, however, is not solely due to the coaching change, players say.

“Players, changing in coaching staff and head coach and external factors, such as the legal allegations we were facing, all have an impact on the culture,” Glass said.

Although this season has been atypical compared to recent Grady success, Moreland still understands the expectations and culture around the school’s program.

“I went to Grady, too,”  Moreland said. “The coach I came in for had built the expectation of winning. I coached and played under him, so I knew the quality of program we had here. It was one that we knew going in that we couldn’t be mediocre, and there were high expectations for the program — not just on the field, but off the field as well.”

Grady’s complete shift from last year stems from the departure of talent from Grady Stadium. Seniors last year, which included five All-State players, accounted for 60 of the 61 touchdowns scored in 2016 and received the majority of playing time. Last year’s seniors also benefitted from the 2014 GHSA sanctions in a way, as they got early playing time after players were removed from the school, making them very experienced by the time they became seniors.

The Sept. 30 game against Region 6AAAAA champion Carver was encouraging for the young Knights, as the team carried a lead into the fourth quarter. Even in the close 22-15 loss, the Knights showed flashes of brilliance against a talented Carver team. The confidence gained is what may propel to future success.

“We need to play like we did [against Carver] and stick together as a team,” senior wide receiver Quillian Felton said prior to the Knights’ season-ending 21-18 loss to Banneker on Nov. 3.

While this season may not instill hope in the Grady fanbase, 1987  Southerner editor Pierce Huff, now an online sports editor at the Atlanta Journal-Consitution, believes all will end well and the down year isn’t out of the ordinary, despite what recent years might indicate.

“At public schools, unless they are recruiting kids in, it’s cyclical,” Huff said. “This year obviously hasn’t been as good as the past years but maybe next year will be better and the year after that. This is normal.”

Huff also believes that while football games are an important event for the Grady community, there is not as much of an emphasis on football as seen in other schools in the Atlanta area.

“You have some schools that can bring in a lot of players and some schools where football is a big deal, and you have good teams year after year, but football hasn’t ever really been the driving force at Grady,” Huff said. “In some places like Collins Hill, football is a really big deal there, so naturally they are going to be good year after year; but here, football has never really been the big drawing card, so you’ve got to expect this.”