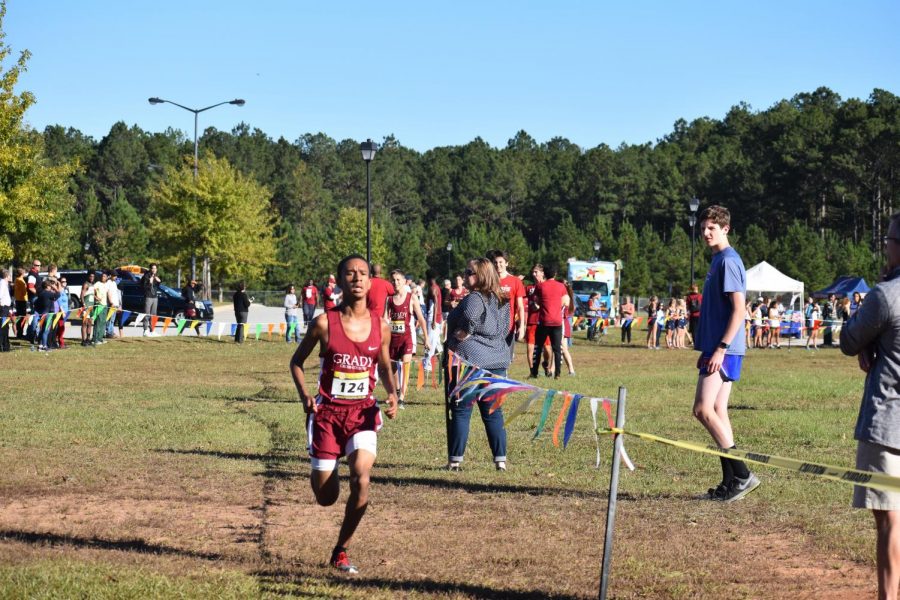 A season’s worth of hard work, morning practices and a continuous push from coaches John Lambert and Jeff Cramer enabled both the girls and boys cross country teams to take fifth place in the state championship.

Despite a successful season, not every runner was fully satisfied with the state results. The meet, held on Nov. 3, marked the end to both the girls’ and boys’ seasons.

“I am disappointed personally about coming one place short from a trophy as a team and one place short of a medal for myself,” senior Aidan Goldston said. “But we ran our hearts out, and as long as we really tried, there isn’t too much to regret.”

The top two runners for the boys’ team were Goldston, who placed eleventh, running a time of 17:19.77 and Isiaha Davis, trailing not far behind, placing fourteenth with a time of 17:32.85. Walden Jones led the girls’ team, placing thirteenth and running 20:11.74. Anna Tischer was the second Grady girls runner, finishing in twenty-first place and running 20:51.53.

“I was hoping we would work as one unit, but state is just so weird, and everyone gets so strung out,” Jones said.

After both teams swept the region and city championships, receiving first place, coaches and runners had high expectations for the State Championship. The current boys cross country coach and newly hired athletic director Lambert, said before the race that he hoped the team would place in the top five, while Cramer, the girls’ coach, predicted the girls would come in fifth or sixth place.

“The first four [on varsity] ran about what I expected, and our fifth runner, Sadie, is a freshman, and she ran really well,” Cramer said. “Charlotte Spears dropped out of the race after the first lap because she was hyperventilating, so she went to the medical tent and ended up being fine.”

Last year, the boys cross country team placed twelfth in the state. Some credit this year’s improvement to coach Lambert. He implemented morning practices, in addition to the team’s afternoon runs. Because coach Cramer oversaw both the girls and boys teams in years past, Lambert has been able to give the boys’ team more attention this season.

“Having Lambert work with me this year makes a huge difference because he really knows what he is doing,” Cramer said. “By giving him the boys team and letting him work exclusively with them has caused them to improve dramatically, and then I was able to focus on the girls team.”

As far as next season goes, both coaches plan to stick with the program and are already discussing new strategies for next season.

“I am going to incorporate more aerobic exercise like trying to do long bike rides on Saturdays,” Lambert said.

Freshman Sadie Zweben, a runner on the girls’ team, impressed coaches and team members with her strong first state meet. The boys team will be losing the two top runners on the team but look to the current freshmen and sophomores to be strongholds on the team next season.

“I do not believe in legacies,” Cramer said. “I believe you take each year as it comes, and you have this set of kids that you are given, and that’s the hand you’re dealt, and you do the best you can with that hand.”