the Southerner Online • May 3, 2013 • https://thesoutherneronline.com/6531/news/you-2-project-together-grady-video/ 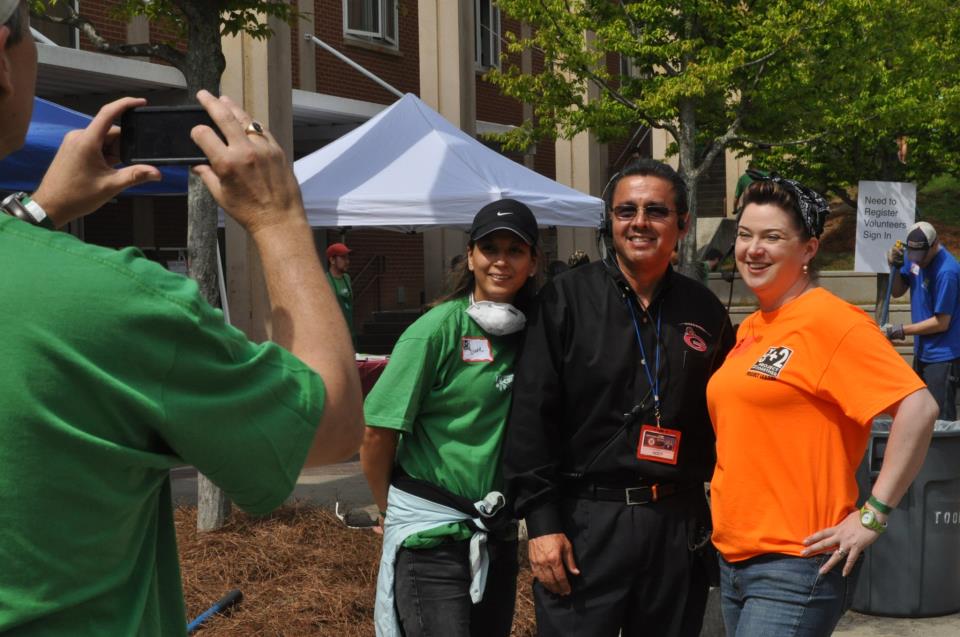 With raucous cheers of “Project” and “Together,” a Starbucks-sponsored service day at Grady began at 10 a.m. on April 27. The 1,404 workers who volunteered painted and remodeled large sections of the school, including the courtyard and bathrooms.

Terri Vish, a Starbucks district manager who was largely responsible for organizing the project, said she and her team prioritized the bathrooms based on a student survey, which revealed the majority of students hoped to see bathroom improvements. Volunteers painted the walls of the bathroom and plan to return to install new sinks.

The volunteers covered the upper courtyard with pine straw, started to sod the courtyard hill, and worked on the senior patio steps.

“We wanted the courtyard [to be a place] to set you guys off in lunch time and have a place to congregate,” Vish said.

Vish said they accomplished nearly everything they wished.

“Our essentials were completed,” she said.

Vish said the workers plan to return to finish laying down sod and cementing the steps on May 11.

Because of the unexpected number of volunteers – she was only expecting 700 – Vish said they ran out of food for the workers.

“We didn’t have anything we had to redo or undo,” she said. “Nobody got hurt which is always a good sign. Really, it was a good group of volunteers. We didn’t have any mishaps like you would think with that amount of people.”

Students, parents and members of the community volunteered at the service day. Students who attended the day will receive 10 hours of community service.

Annie Huff, who graduated Grady in 1981, was one of those who volunteered. Huff was a student at Grady when Eddie Henderson, the coach to whom the Grady stadium is now dedicated, reigned over the athletic department. She heard about the event through the Knee Benders Christian Motorcycle Association.

Huff said when she arrived at the school in the morning on April 27, Grady had already changed significantly.

“It’s not the same place,” Huff said. “The front is all I recognize.”

Huff worked to paint the railings of the stairs she walked up and down more than 30 years ago.

“We had NFL players and also high school coaches teaching them the fundamentals of the game of football,” Curry said. “We also taught them life lessons in addition to introducing the Heads Up tackling initiative by the NFL and USA football.”

The Heads Up tackling initiative was created by the Centers for Disease Control and Prevention to promote concussion awareness and safety in young athletes.

NFL players in attendance included former Minnesota Viking Earthwind Moreland, who graduated Grady in the mid-1990s, Michael Harris of the San Diego Chargers, and others.

In the gym, 50 girls participated in a basketball clinic.

Sharon Powell, regional vice-president of Starbucks, said everyone who participated left with a reminder of Starbucks’ mission statement.

“[Our mission is] to inspire and nurture the human spirit,” Powell said.