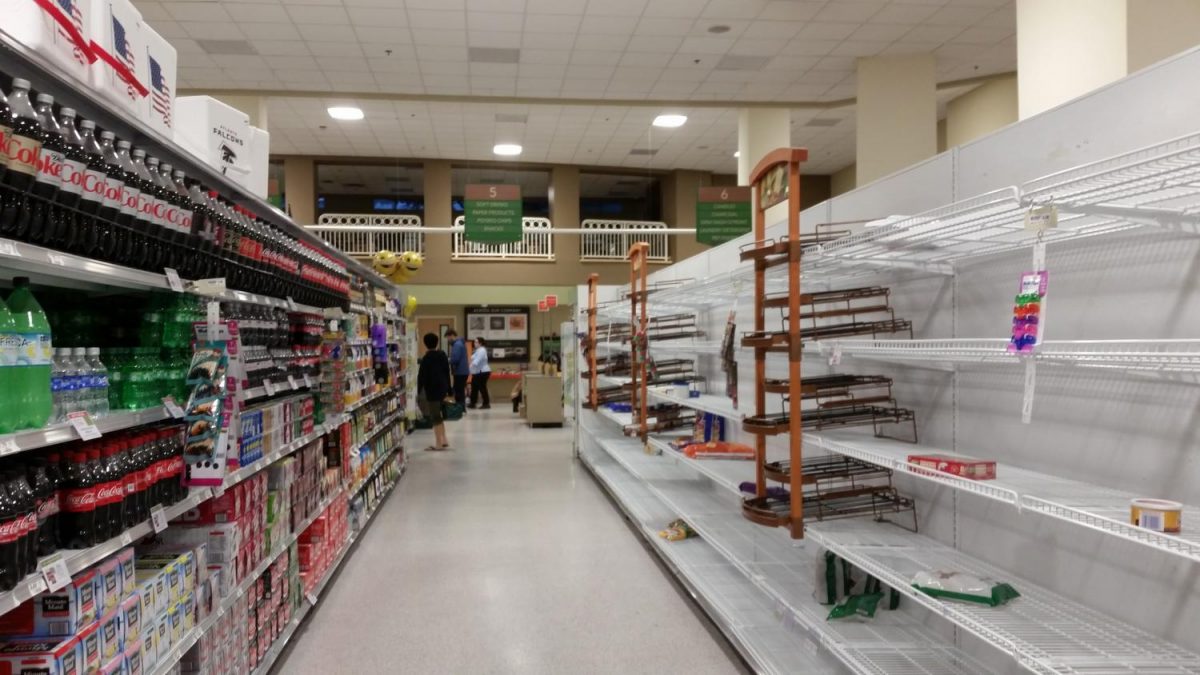 Atlanta citizen's raid grocery stores for nonperishables in preparation for the storm.

Hurricane Irma left power outages lasting four-plus days, inch-deep debris on roads, empty water shelves in grocery stores and other damaging effects when the storm touched down Atlanta on Sept. 11. Most Atlanta residents were impacted by the hurricane in some capacity, including members of the Grady community.

Hurricane Irma was the first tropical storm to hit Atlanta, with gusts of up to 65 mph and downpours of rain. Atlanta Public Schools (APS), along with other local school districts, suffered power outages. As a result, all 98 schools across the district were cancelled through Wednesday Sept. 13. At that point, the last of the the schools that lost power were fully functionable and complications with perishable foods, roads, staffing and outages were no longer a concern.

“All of our schools were affected by the hurricane with 31 having their power knocked out on Monday, Sept. 11,” APS Superintendent, Dr. Meria Carstarphen said. “By Wednesday, Sept. 13, we had all but four of the schools back online. When M. Agnes Jones Elementary School came back online in the wee hours of Thursday, Sept. 14, we were ready to open for business again!”

The last time remnants of a tropical storm struck Atlanta was in 1995 with Hurricane Opal. During this storm, APS did not cancel school. AP Language and Composition teacher, Lisa Willoughby, taught at Grady and believed Irma, in comparison, was considerably larger and had a more widespread impact.

“One of the big impacts from Irma was the evacuation, causing so many people to come to Atlanta,” Willoughby said. “There were so many people here in Atlanta fleeing from Florida and South Georgia”

In the aftermath of Irma, Grady faculty members and students alike suffered damage from fallen trees and blocked roads. Helen Moore, a sophomore, was directly impacted when her neighbor’s tree fell onto her house on the first day of the storm. While the roof damage was severe, the majority of the destruction to the home resulted from water damage. Moore’s family is currently displaced.

“We just moved into a hotel,” Moore said. “We are hoping to get an apartment by next week.”

Lena Denton, a senior, lost power for five days, a longer time period than most students experienced. In a future outage, Denton and her family plan to move to a hotel because of the inconveniences it caused. While many students enjoyed time off, Denton felt restricted and unproductive due to the fact that she could not access the internet or turn in any assignments.

“It was kind of nice to be able to charge my phone at school and be able to use the library computers actually,” Denton said.

The Grady community has worked diligently to help victims of hurricanes in Houston and Florida. The 21st Century Leaders club, led by U.S. history teacher Mary Van Atta, has been influential in these fundraising efforts. The club raised $230 for the American Red Cross in their ‘Help Houston’ drive.

“We also diverted over 150 food and water items from the pop-top drive to the Atlanta Community Food Bank which sent trucks to help victims of Hurricane Irma,” Van Atta said. “Those items totaled 104 pounds which estimated to 87 meals sent.”

Just as the cities impacted by Hurricane Irma must strategize to remedy leftover damage, the schools must make a contingency plan to make up for lost instructional time. APS Superintendent Meria Carstarphen and other local boards of education came together and met with a Core Weather Team. This team includes representatives from APS Operations, Transportation, Safety & Security, Facilities Services, Communications, Curriculum and Instruction, Nutrition and Information Technology departments which help with the decision making process. As many students and parents worry about the possibility of the shortening school breaks, Dr. Carstarphen clarifies on the implementation of make-up days.

“I have made the recommendation that APS does not need to make up the days and that our district has worked in enough instruction time to handle the missed days,” Carstarphen said.

In contrast, Dekalb Schools have extended their school days an additional 20 minutes for the remainder of their first semester.

“Longer school days are certainly one remedy to make up for missed days,” Carstarphen said. “I would certainly consider it if we had to make-up days due to closing APS schools again later in the school year.”