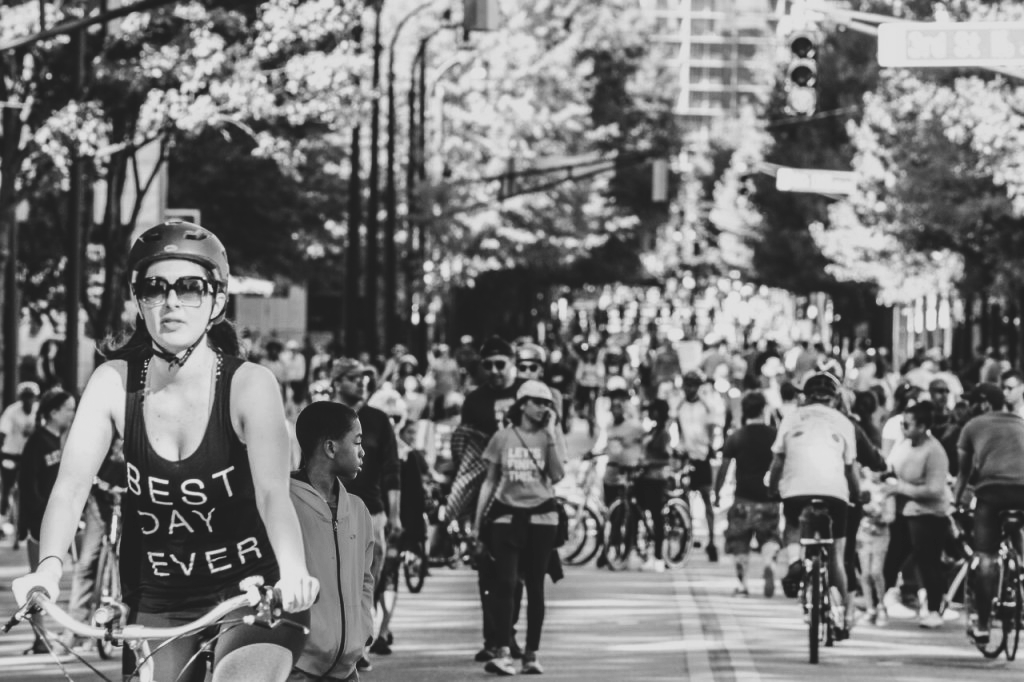 Decorated bicycles streaked down Midtown’s streets as part of one of Streets Alive’s 2016 bicycle parades. Pedestrians and groups of roller bladers also joined in the festivities.

Streets Alive is an initiative that closes some Metro Atlanta streets on four Sunday evenings a year. On Sept. 27, Streets Alive closed off sec- tions of Boulevard and North High- land, encouraging people to walk, bike and roller blade through the streets. On Oct. 23, Streets Alive held an event on Peachtree Street.

Streets Alive was started by the Atlanta Bike Coalition (ABC), a group that advocates for improved conditions for biking in Atlanta. It is based on the “Open Streets” concept, which originated in Bogota, Colombia.

“Streets at one point were not just for cars; they were for everyone,” Keisa Bruce, ABC spokeswoman, said. “That’s why we started this initiative six years ago. If you open the streets to people, they can more easily engage with one another.”

Bicyclists of various ages and skill levels were joined by skateboarders and pedestrians. The route started in Virginia-Highland and ended in the Old Fourth Ward, as the event supported a racially and socioeconomically diverse crowd.

“I believe people from all different neighborhoods felt welcomed in neighborhoods they don’t usually go to,” junior Eve Robinson said.

“People can learn information on what we’re doing,” Mimi Walker, pastor of the Virginia-Highland Church, said. “We’ve tried very hard to be a community church; this is a way to let the neighbor- hood know that we’re here.”

Companies gave out samples of their products or handed out fliers. Google Fiber offices wel- comed those who were curious about its high-speed internet ser- vice and were wondering if they were eligible.

“We’ve had a lot of people stop by,” said Khushboo Brahmbhatt, who works for Google Fiber. “[Our Streets Alive table] has been a pretty successful way to promote.”

Additionally, advocacy groups for alternative modes of transport set up tables, including MARTA, Power to Change and Georgia Commute Options.

“Our goal is to promote alternative transportation,” Ricardo Vera, a Georgia Commute Options representative, said. “If we can help promote bike lanes and encourage more people to bike around, we are happy.”

One of Streets Alive’s missions is to promote alternative modes of transportation by allowing Atlantans to bike without having to worry about safety threats from cars.

“We don’t bike a lot, but Streets Alive is a safe way to bike because there aren’t any cars,” Ava Carubia, a Maynard Jackson High School freshman said. “I’ve enjoyed it so far because everyone’s out together and it’s a nice day. It makes me want to bike more.”

The number of people attending the Sept. 27 Streets Alive was estimated in the tens of thousands, according to Streets Alive. Some proponents of alternative transportation see these numbers as reflective of Atlantans’ growing acceptance of transportation options other than cars.

“Over the years, I’d see more of my neighbors out walking or biking,” Vera said. “This is the biggest Streets Alive I’ve ever seen, and I think the number of people out here today is a testament to the rise of alternative transportation use in Atlanta.”