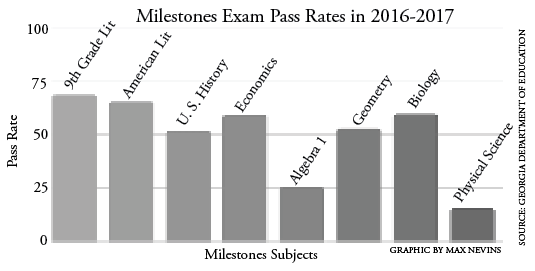 Grady Milestones pass rates for the 2016-2017 school year increased from the previous two years. The state mandated tests are administered each year and are used to evaluate public schools.

In the 2016-2017 school year, Grady increased scores on the state Milestones exams across all subjects and was one of the top scoring schools in the Atlanta school district.

“I’m very proud of Grady, and I’m pleased that all of the hard work that the students and the teachers put in seems to be paying off,” social studies teacher Mary Van Atta said. “This is a good thing for APS, Grady students and staff. It’s kind of a win-win-win situation.”

Van Atta teaches U.S. History, a milestone class and one of the eight subjects that are tested. Grady had the highest U.S. History scores in Atlanta Public Schools.
Milestone assessments are taken in the spring for all Milestone subjects with the exception of economics, which is taken by some classes at the end of first semester. The tests are scored by four rankings: “distinguished,” “proficient,” “developing” and “beginning,” from highest to lowest.

Scores that qualify as “distinguished” and “proficient” are considered passing scores. Grady had the highest passing rates in APS for U.S. History and biology, and the second highest for 9th grade literature, American Literature, economics, and geometry.

In addition to achieving high scores, Grady made significant improvements in the number of developing learners and above. From 2015 to 2016, Grady only improved by 1.2 percent, with 73.8 percent of students reaching developing learner and above in 2016. Twenty-seventeen reflected a greater score increase: a 7.2 percent increase in scores brought 81.1 percent of students to this standard.

“The trends have actually been fairly positive,” said instructional coach Byron Barnes. “What we focus on is trying to reduce the amount of beginning learners, and in some subjects, we were successful in reducing those. The cream is expanding the top area, the distinguished learner. We increased the scores in that area which really shows that students are being pushed to demonstrate greater mastery of the standards.”

In the previous school year, standards in most classes changed. The Georgia Standards of Excellence (GSE) replaced the former Georgia Performance Standards (GPS). To increase Milestone performance and adapt to the new standards, Milestone teachers focused on collaboration to ensure success.

“We’re re-tooling lessons to make sure they’re in alignment with the GSE (Georgia Standards of Excellence state curriculum standards),” Van Atta said. “We talk about strategies and pacing, and we collaborate creating test questions and lesson materials. I think that’s going to enrichen our students’ lessons. And it’s also going to make sure students are on the same trajectory so that we can improve performance across the board, not just for certain pockets of students.”

Van Atta attributed Milestone success in U.S. History to not only a focus on the standards, but also to the weekend review sessions held by U.S. History teacher and Social Studies Department Chair Lee Pope.

Another group Van Atta credits for Milestone success are the special education teachers.

“They are able to not only help us navigate the behavior, but they are also able to help all the students with all of their needs, not just the special-ed kids,” Van Atta said. “So that’s another set of hands, another voice, another mind in the classroom that helps the wheel run more smoothly.”

While most teachers were pleased with the Milestone success, some teachers think the learning should not solely focus on meeting the standards.

“We definitely have standard-driven instruction, but I think good teaching naturally teaches to those standards,” said English Department Chair Lawrence McCurdy. “The standards are really just things that we should do anyway, and we obviously have to be cognizant of the standards, but good teachers teach to the standards without forcing their instruction on a standard. It’s kind of a natural force of events.”

For classroom and Milestone success, McCurdy emphasised giving attention to students who are not necessarily taking honors or AP classes.

“I think we need to really continue to address the needs of our grade-level learners and make sure we’re keeping them engaged and keeping them interested in school in general,” McCurdy said. “That’s where the results are going to come, from the bottom up.”

McCurdy extended his thoughts on teaching and learning beyond standards, an idea that he discusses in his classes.

“I think the biggest thing is making sure we focus not only on student needs but also on ways to keep students engaged in the content and make sure student-centered learning is happening,” McCurdy said. “I think finding ways to get kids into the text, making the text relative to them, and making sure that not only do they understand what they’re reading but that they acquire some level of love of literature [is the most important];that’s what I shoot for in my classroom.”