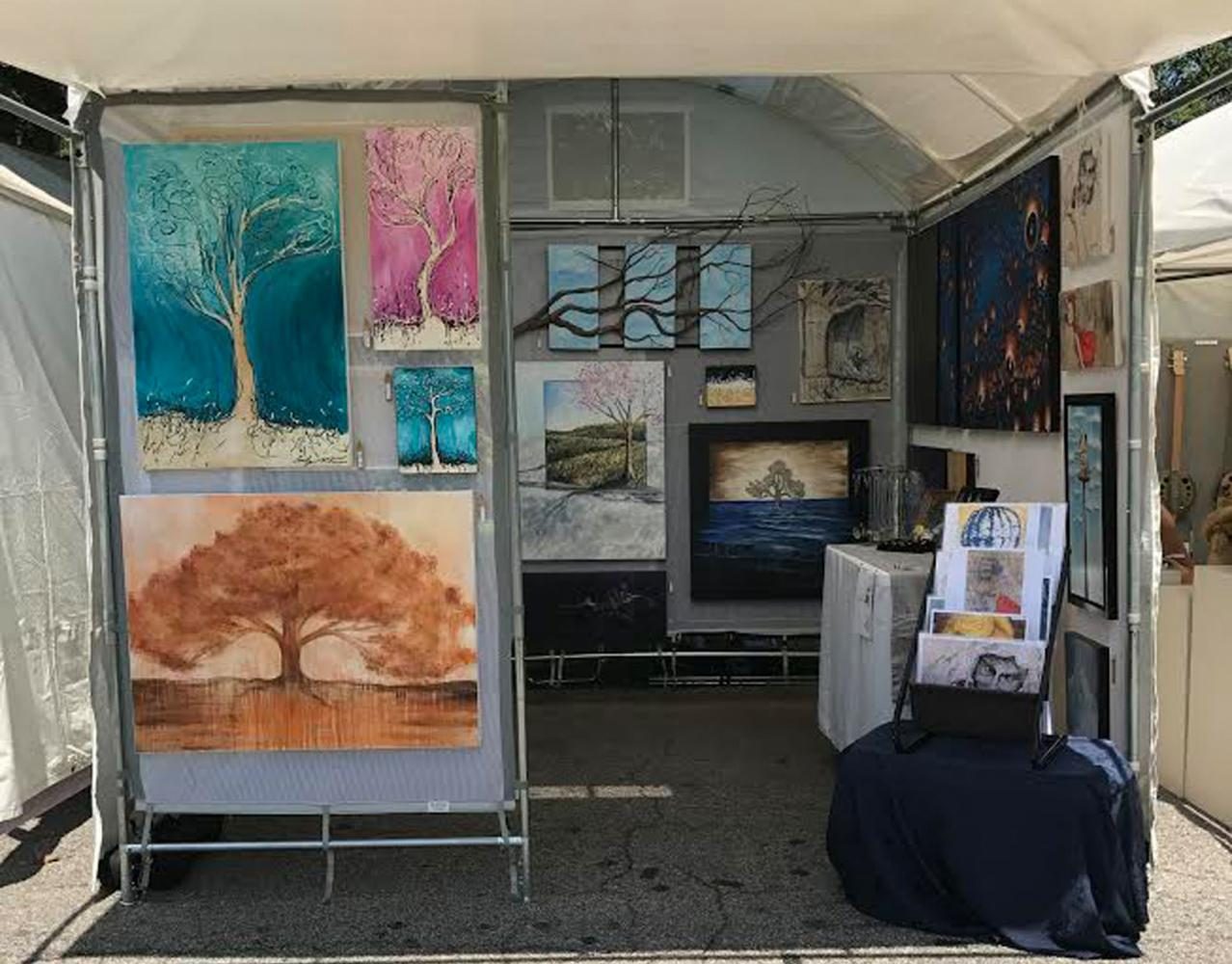 An artist displays his or her paintings at the Piedmont Park Arts Festival. Photo by Parker Killenberg.

On a balmy summer weekend, hundreds of art vendors and enthusiastic Atlantans gathered in Piedmont Park for two days of art and food. Sunshine Artist Magazine dubbed this as one of the top 100 Arts Festivals in the Nation, leaving high expectations for the event, presented by the Atlanta Foundation for Public Spaces.

According to the festival website, this event featured 250 artists and expected an eager art-buying audience from metro Atlanta. There was a variety of vendors, from jewelry makers to herb growers. There were also other booths, including State Farm and Verizon tents.

While many artists there were professional artisans, some creators had recently found a talent in their hobby and wanted to try their luck at the festival. Sunny Blount recently started her artistic venture, The Common Object, after making a lamp for herself.

“I just made one for myself in November,” Blount said. “I’m still perfecting the technique.”

Sunny and her business partner, Natalie Imran, make lamps and other home items out of concrete and edison bulbs. The pieces are created from molds, made of acrylic, that are handmade by the artists.

“This is our first festival we have been to, but we may do more later in the year,” Blount said. Although they are not in any stores yet, their lamps can be found on Instagram at “@thecommonobject.”

While homeware items were prominently featured at the festival, many other pieces were shown. Cindy Espinoza, an Atlanta resident, discovered jewelry making while travelling and has been attending festivals for years.

Through her travels, Espinoza has kept pieces of jewelry from the places she visited.

“I always thought jewelry was a good memory to buy when traveling,” Espinoza said. “When I was travelling, I went to a store that had strings of stones. I thought, ‘I could do that.’”

She currently makes pieces for friends and family and her “hobby” expanded into a  15-year craft venture.

While jewelry and homeware may draw in more crafty festival-goers, the artwork at a number of booths enticed senior Janey Walker.

“The booth I liked the best was a photographer from Chicago,” Walker said. “He had one picture of an old man holding a newspaper that said that (Former President Barack) Obama had won the presidency.”

The artist whose photographs Walker saw was Clifton Henri, a photographer from Chicago, who describes his art as “storytelling.” According to his website, his art is influenced by the Harlem Renaissance and Civil Rights Movement and the majority of his paintings feature African-American subjects.

In addition to the arts’ booths, food trucks with “healthier alternatives” and bouncy castles sat in the park for the multitude of kids to enjoy. Trucks, like Nectar, which is a healthy Atlanta staple, had a lengthy line, and kids bounced all day on the dinosaur castle set up in the Tavern green. Picnic tables sat adjacent to the booths and many informational booths gave out free balloons or toys to younger passersby.

The two-day event offered enjoyable activities for those of all ages.

“There was a really nice vibe,” Walker said. “ It was pretty small and just seemed like people all talking about art together and having fun.”