Atlanta welcomes “Art on the BeltLine” 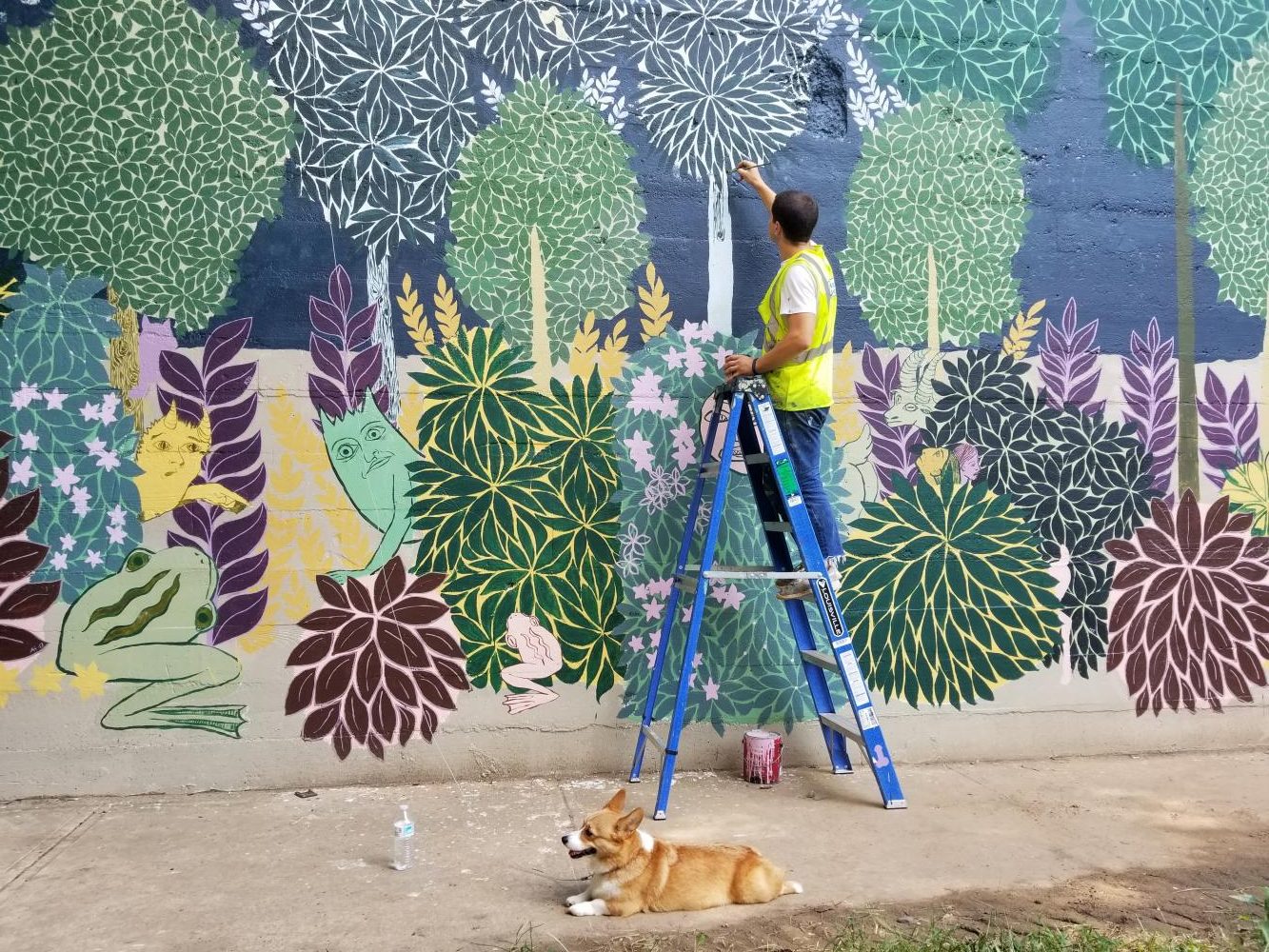 ARTIST AT WORK: Andrew Catanese, an Atlanta-based artist, works on his mural on the BeltLine beneath the Eastside Trail. Catanese paints murals in the “horror vacui” style. volunteer help.

This fall, the Atlanta BeltLine is hosting the city’s largest public art exhibition, “Art on the BeltLine.” The annual event kicks off with the Lantern Parade on Sept. 9 and is followed by a month of visual and performing arts located just walking distance from Grady.

Just beneath the Eastside Trail at Ralph McGill Boulevard is a mural by artist Andrew Thomas Catanese, an Atlanta native.

Starting mid-August, Catanese has been busily painting with the help of his partner S. Shayne Hargis and several volunteers who reached out to Catanese or just stopped by the site.

All artists submitted proposals for “Art on the BeltLine” in May. Their art was reviewed by juries, who convened to review and score all proposals. Then, the selected artists were notified in June and July.

“Our art team works with each artist to site their visual installations or schedule their performance times,” said Jenny Odom, “Art on the BeltLine” manager.

The style that Catanese uses is called horror vacui, which is Greek for “fear of the empty.” Catanese describes this as common among early Northern Renaissance works and is relatively uncommon in more modern art.

“It’s sort of the opposite of minimalism,” Catanese said. “The principle behind it in terms of making design is that you actually fill the entire space”

Catanese also takes inspiration from the storytelling aspect of Renaissance work which was used to communicate to a mostly illiterate audience.

“I am usually working from a bunch of different narrative sources,” Catanese said. “ A lot of times I’m combining narratives like biblical narratives, mythology, fables. The way that I work is geared towards telling a story.”

Also located on the Eastside Trail over Ralph McGill Boulevard, is a colorful sculpture by Massachusetts-based artist, Susan Champeny who has a love for public art.

“People don’t have to go to a gallery or museum,” Chameny said. “They can just be in a park or some other place where they normally would be. That’s super fun. Especially when kids encounter artwork in a place like a park. They want to explore it.”

Chameny participated in “Art on the BeltLine” in 2012 and is excited to be returning.

In Old Fourth Ward Park and Gordon White Park, Rachel Evans will be creating a series of live landscape paintings. Evans describes her art as expressionist and prefers composing in the French tradition “en plein air” or on-site in open air.

“My art  is based on real subject matter,” Evans said. “I paint mostly clouds, but it is definitely my personal visual interpretation. My style of painting emphasizes thick brush strokes and a variety of colors.”

Evans in an Atlanta native and  graduate of Savannah College of Art and Design (SCAD). She currently works at SCAD FASH Museum of Fashion and Film and SCAD Atlanta exhibitions.

“It is always nice to recreate the place that you call home,” Evans said. “I enjoy painting Atlanta because I am inspired by my surroundings on a daily basis. I see beauty all around, whether it is the bounty of trees in our city, the urban skyline, or the cloud formations over the buildings.”

This is Evans’ first year participating in “Art on the BeltLine” and she is excited for a great season. She will be painting in Gordon White Park on Sept. 24 and Old Fourth Ward Park on Oct. 8.

During the final weekend of “Art of the BeltLine’s” performances, Small Opera Company will be singing on the Historic Old Fourth Ward Park steps on Oct. 7.

“Our motto is Nomadic vocal drama,” said Katherine Oates Small, the founder of Small Opera. “We like popping around from place to place and doing community events where people wouldn’t expect to see opera so that we can broaden the audience and show people opera that they might not have ever been exposed to before.”

The company calls these pop-up operas SMOPS pops. They perform in various venues such as coffee houses, outdoor patios and farmers markets.

“I loved going around to different locations, performing and doing community outreach education,” Small said. “But the companies I was performing for were selling tickets so that you could come to a theater, dress up and see an opera, and I wanted to bring opera to the community.”

The singers of Small Opera are colleagues of Small that have worked with her at Atlanta Opera, Capitol City Opera, Peach State Opera. Recently, Small Opera has expanded to Charleston, S.C. and is growing. Before moving to Charleston, Small lived in Virginia-Highland and remembers when the BeltLine was first constructed.

“I would walk on the BeltLine all the time, and so I saw it grow from a new project to a really desirable area to live and eat and shop, and it became this fantastic community. I knew that I wanted to perform on it early on,” Small said.

Small Opera will be bringing three performers and a pianist to the Old Fourth Ward Park and performing excerpts from their February production “Love and Death,” works from operas such as Carmen, Werther, La bohéme and Romeo and Juliet.

All artwork is expected to be completed and installed by the Lantern Parade on Sept 9. Since the first “Art on the BeltLine” in 2010, the number of selected projects has grown from 40 to more than 100.

“The BeltLine is a very public venue to display your art,” Champeny said. “So people of all walks of life get to see and enjoy it. I love that aspect.”