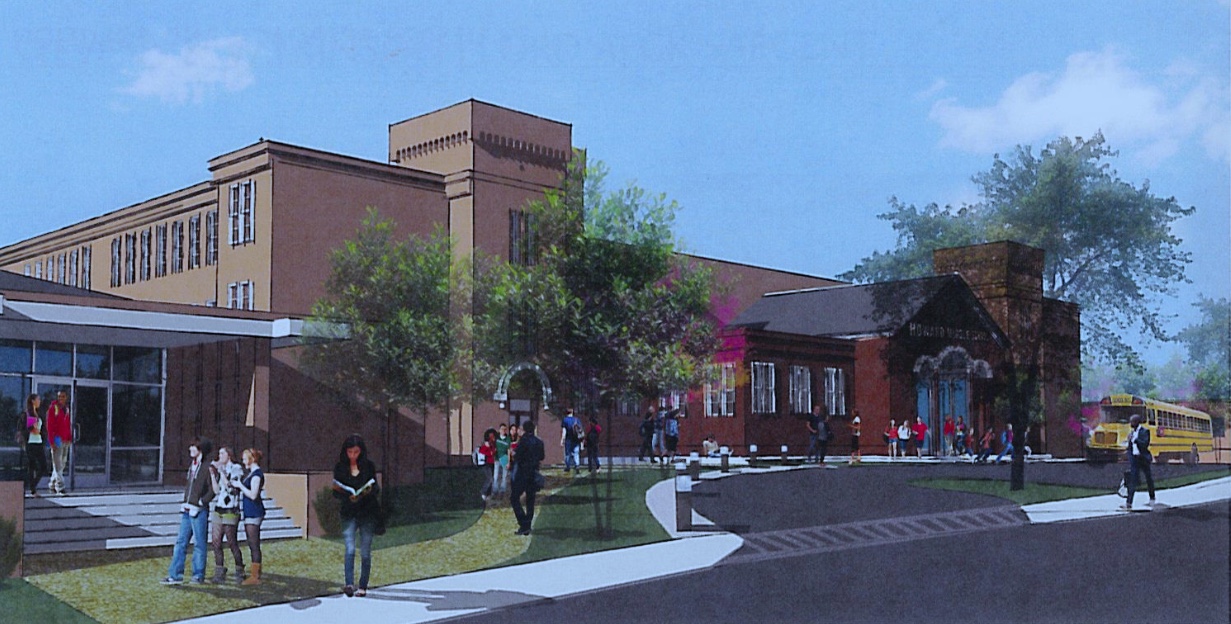 The future in the present: Atlanta Public Schools provides a rendering of the finished Howard building. The David T. Howard school in Old Fourth Ward will reopen in 2020 as the Grady cluster’s new middle school, replacing the current Inman middle school. The push for renovation stems from Inman’s overcrowding and ongoing request for the building to be put back to use. This is the first time the building will see an integrated student body.

Old Fourth Ward is one of the most recent developing neighborhoods in Atlanta, and amid the extension of the BeltLine and crop up of high-end apartment buildings, this area has changed dramatically in the last couple of years.

In the wake of overall Old Fourth Ward development, one change coming to the area is the reopening of the David T. Howard building. Opened in 1924, the David T. Howard building lies in the center of Old Fourth Ward and served as both an elementary and high school with notable alumni such as Civil Rights leader Martin Luther King Jr. and Maynard Jackson, the first African American mayor of Atlanta.

After closing due to declining enrollment in 1976, the school remains vacant. However, Atlanta Public Schools plans to reopen it as the Grady cluster’s new middle school shortly after its completion in July 2020. The reinstatement of this building marks the first time the school will see an integrated student body.

The push for restoration came from issues posed by the building’s current vacancy (vandalism, public safety, etc.) and the need for a larger building for Inman Middle School. Inman’s current enrollment tops 1,000, despite the building’s capacity of only 875, while the capacity of the Howard building is 1,375.

“The relief that’s needed is for the field space. That is the problem that Inman has, and Grady has, [is that] they have teams that can’t really practice,” said Principal Dr. Betsy Bockman, who is also the former principal of Inman. “They need the field space definitely to take the trailers away.”

Moving the cluster’s middle school not only alleviates overcrowding, freeing Inman to become an elementary school, but the reopening of Howard contributes to the changing atmosphere of the Old Fourth Ward community.

Residents and businesses in the area  will be affected by this change, and with shops like Jake’s Ice Cream and the multitude of restaurants in Krog Street Market a short walk from the building, the surrounding area of Howard could be impacted as it becomes a popular after-school destination.

“I think that it is actually going to be good for business, especially now that [Howard] is right here,” Marvin Tandongfor, an employee at Jake’s Ice Cream and Inman alumnus, said. “We get a lot of kids that come here, and I think that it makes a lot of sense. After school, this might become the new spot for kids to come and chill and eat ice cream. It’s going to be pretty busy around here.”

Other businesses also have positive outlooks on the school’s impact.

“Kids will want to come here to eat and get food after school,” Amari Hines, who works at the pizza restaurant Varuni Napoli in Krog Street Market, said. “I think it will be a popular place.”

The transition from Inman to Howard will have notable effects not only on the businesses and residents, but to the children attending the school as well.

“[There is a] realization that the neighborhood will change dramatically, and we welcome that,” Godfrey Finch, a Howard Alumni representative on the building’s design team, said. “We know that we are going to be able to touch a number of children from different backgrounds from what [the former Howard students] were there. It’s exciting.”

Others also have high hopes for the building’s reopening.

“Our lense as we’re building this is college and career ready focus,” said Dr. Kevin Maxwell, Inman’s current principal. “So, I feel that that school will be better equipped for not only getting these elementary students to middle school, but then to push those students on to the high school.”

Despite the significant changes coming to the community and the school, the Howard building will keep its name, becoming the Howard Middle School.

“Having that name…to believe in what people like [David T. Howard] did will be a great starting point,” Finch said. “Not only does that tie the new students that are coming in but also the old students that graduated from there.”

While the explicit effects of the Howard’s reopening remain to be seen, its prospects of a positive impact on the community and students seem promising.

“As we open other schools, the Howard school can be an example of how important it is to embrace the newness, the differences, as well as how much we are together and how we are alike as opposed to how we are different,” Finch said.