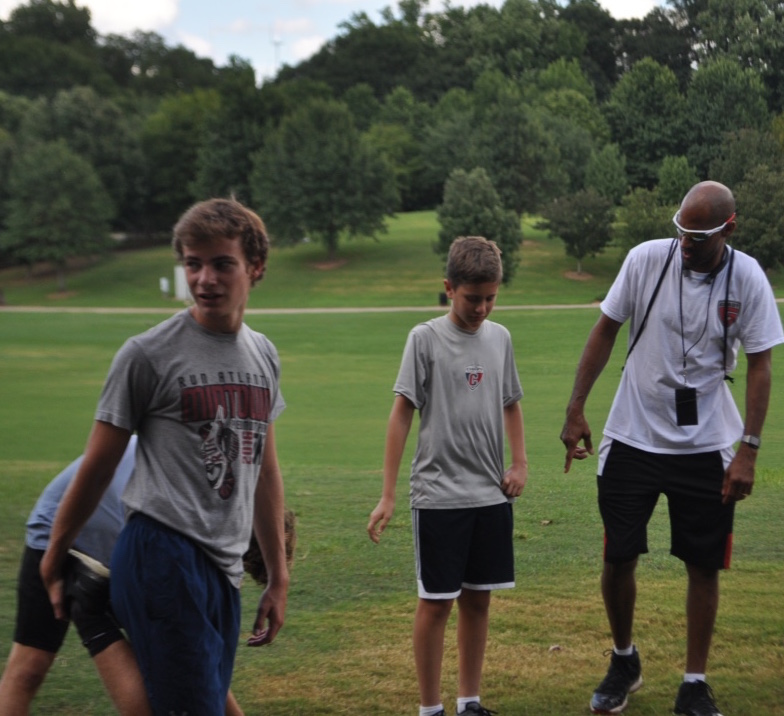 The start of a new school year brings about many changes around campus, and the athletic department is no exception. John Lambert will be filling the athletic director position previously held by Myss Johnson-Jelks.

“Originally, I was coming over to be the physical education teacher and coach boys’ cross country and girls’ track and once the position came open [I took it],” Lambert said. “As a P.E. teacher, becoming an athletic director is one of our dream jobs.”

Lambert previously worked as a P.E. teacher at Mary Lin Elementary School and has been with Atlanta Public Schools for 19 years. Grady Principal Dr. Betsy Bockman became affiliated with Lambert when he taught her children for two years at Mary Lin.

“I was really impressed with the way he carried himself, very calm, and when faced with the decisions and difficult situations this job offers, you need that,” Bockman said.

Grady’s history and reputation both influenced Lambert to take the position.

“Grady has a great history of academics and athletics. Grady is one of the prestigious schools that you want to teach at,” Lambert said. “You know you can go there and have a great career, a great set of kids and a great faculty.”

Currently, Lambert is focusing on clearing athletes with the Georgia High School Association so that they are eligible to participate in school sports. At Grady, Lambert wants to make additions to the school so that students are encouraged to be more athletically involved.

“I want to change the gym around and start recognizing kids and the different sports teams a little more,” Lambert said. “I want to be able to recognize them with their name on the wall so that the kids will want to be a part of more sports. The ones who are not involved will start saying ‘I want my name up on the wall.’”

In addition to the athlete recognition, Lambert aims to make changes in the various P.E. classes at Grady. The goal is to make students more participative and physically engaged.

“We’re cutting the bleachers out. The first week was fine, but after that, we pushed the bleachers in so that they’re going to be moving the whole time.That’s what we’re trying to get them accustomed to,” Lambert said. “We are a no-cell phone zone. They don’t like it, but it’s slowly catching on.”

Dr. Bockman is very hopeful for the athletic department as a whole and seeks to change the way physical education classes have been perceived in past years.

“Probably about five years ago, physical education classes at Grady did not have a great reputation, so I know that when Coach Jelks came that was one of her main goals, to up the PE department,” Dr. Bockman said. “I definitely saw a change last year from what I had heard, and I just hope that Coach Lambert continues to do that.”

After three years as athletic director, sports coach, and health teacher at Grady, Jelks transitioned to KIPP Atlanta Collegiate High School where she now works solely as the athletic director. Although the decision was hard for Jelks, she ultimately moved due to more flexibility offered with the new position. At Grady, Jelks strived to make changes to not only the athletic department, but the school as a whole.

“One of the things [I aimed for] when I first started at Grady was to rebuild the school spirit, and I think that I did a decent job,’’ Jelks said. “I tried to get the branding out and give Grady a positive vibe athletically. I just wanted to be available so that I could make myself better however I needed to.’’

Jelks added that she focused on  “the spirit, getting people in school paraphernalia, and getting kids excited about buying letterman jackets. All of that stuff was important for me to see, especially in a high school as great as Grady.”

The interviewing process to hire a new athletic director came down to the wire during mid July when the position remained vacant. Dr. Bockman interviewed multiple prospects and chose one coach who, unfortunately due to personal reasons, could not fill the position. Lambert, who had been previously seen as a candidate, was then contacted, but was unable to make the interview dates.

“I asked coach Lambert if he would do it for the year, and we would just see how it goes. So it is kind of interim, but that is not the official title,” Dr. Bockman said.

Sports at Grady are seeing a shift from the way they have looked in the past. Lambert ran track at Alabama A&M and has a passion for the sport. He plans to coach girls’ track in the spring and is currently the head of the boys’ cross country team.

“Track has really helped me a lot,’’ Lambert said. “I don’t know where I would be if it weren’t for athletics. That’s why I try to push every kid I can to be that student first because I was talented in high school, and I thought I was going to go pro early. That dream got crushed really quick.”

Dr. Bockman estimated that Grady paid $500 to $700 in fines due to unprofessional behavior by coaches last year. With the addition of many new coaches across all Grady sports, including cheerleading, softball, track and swimming, Dr. Bockman anticipates a change in Grady athletics.

“I am not concerned at all about the coaching changes. We are getting coaches that know the sports and love the sports,” Dr. Bockman said.

Lambert’s first year at Grady has started well. Membership in the booster club for the athletics program has increased, and he has secured multiple new coaches.

Lambert has had many up and downs with athletics that has driven him to where he is now.