Take on Woodward next week 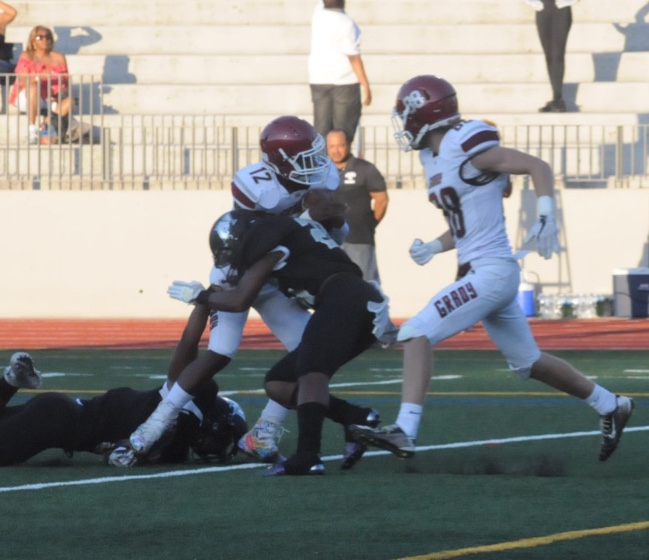 Sophomore quarterback Aquinas Stillwell runs in for an early touchdown against North Atlanta at Grady Stadium on Aug. 18. The Knights fell to the Warriors 21-7.

In a rematch of a 53-0 blowout from last year, the Knights fell 21-7 to North Atlanta after a slew of underclassmen in the starting lineup were outmatched in the season opener Aug. 18.

Next, Grady travels to College Park to face Woodward Academy. Last year, Grady upset Woodward 14-10 after the Maxwell Ratings predicted a 30-point loss for the Knights. The War Eagles were inactive this week and will open their season against Grady.

While some members of the Grady community may believe that the matchup between the Knights and Warriors is not rivalry, including the cheerleading squad at Grady, whose sign read “53-0, Is This A Rivalry?,” those on the North Atlanta side believe the matchup defines a rivalry, and that their latest victory has added fuel to the fire.

“Our two schools have played one another more than any other in North Atlanta history,” North Atlanta coach Jeremy Gainer said. ” Over 15 games and 25 years of competition, the Warriors had only posted three wins until we got number four on Friday Night. A rivalry is all about respect between two similar places who are competing to be superior in everything that they do and in that regard the rivalry between North Atlanta and Grady is alive and well.”

After a quick three and out and a blocked punt on the opening series against the Warriors, the Knights had excellent field position. On third down, sophomore quarterback Aquinas Stillwell called his own number and took the ball into the end zone from 11 yards out. An extra point that just snuck over the crossbar by senior kicker Quinn Cowden put the score at 7-0 in favor of the Knights.

On the next series, Grady again forced a three and out, but were unable to get anything done on offense before the punt by Soro was blocked and recovered by North Atlanta at the Grady 17-yard line. On the first play of their drive, Warriors senior running back Deondre Ezzard bounced like a pinball off several Grady defenders into the endzone. After a successful PAT, the score was knotted up at 7 a piece.

Grady again failed to do anything on offense, punting after three plays. With the punt downed at their own 44 yard line, the Warriors set up near midfield. Again, North Atlanta would score on the first play of its possession, this time with a strike downfield from sophomore quarterback Wiley Hartley to senior wide receiver Dominic Ham, to put the Warriors up 14-7.

On the ensuing possession, the Knights had a long drive going as the first quarter came to a close, however after a 4th down scramble by Stillwell that would’ve given Grady a first-and-goal scenario, a big hit by the Warriors defense poked the ball loose and caused a turnover at the 1-yard line.

After defensive stands by both sides, the score remained 14-7 through halftime until North Atlanta went on an 11-play, 61-yard drive that resulted in a touchdown by senior fullback Jeffrey Wood in the early minutes of the fourth quarter.

Looking for a change of pace, Grady switched to sophomore quarterback Alvin James III as signal caller, however, the tale of the tape remained the same as the Knights failed to even sniff another scoring opportunity, resulting in a 21-7 loss.