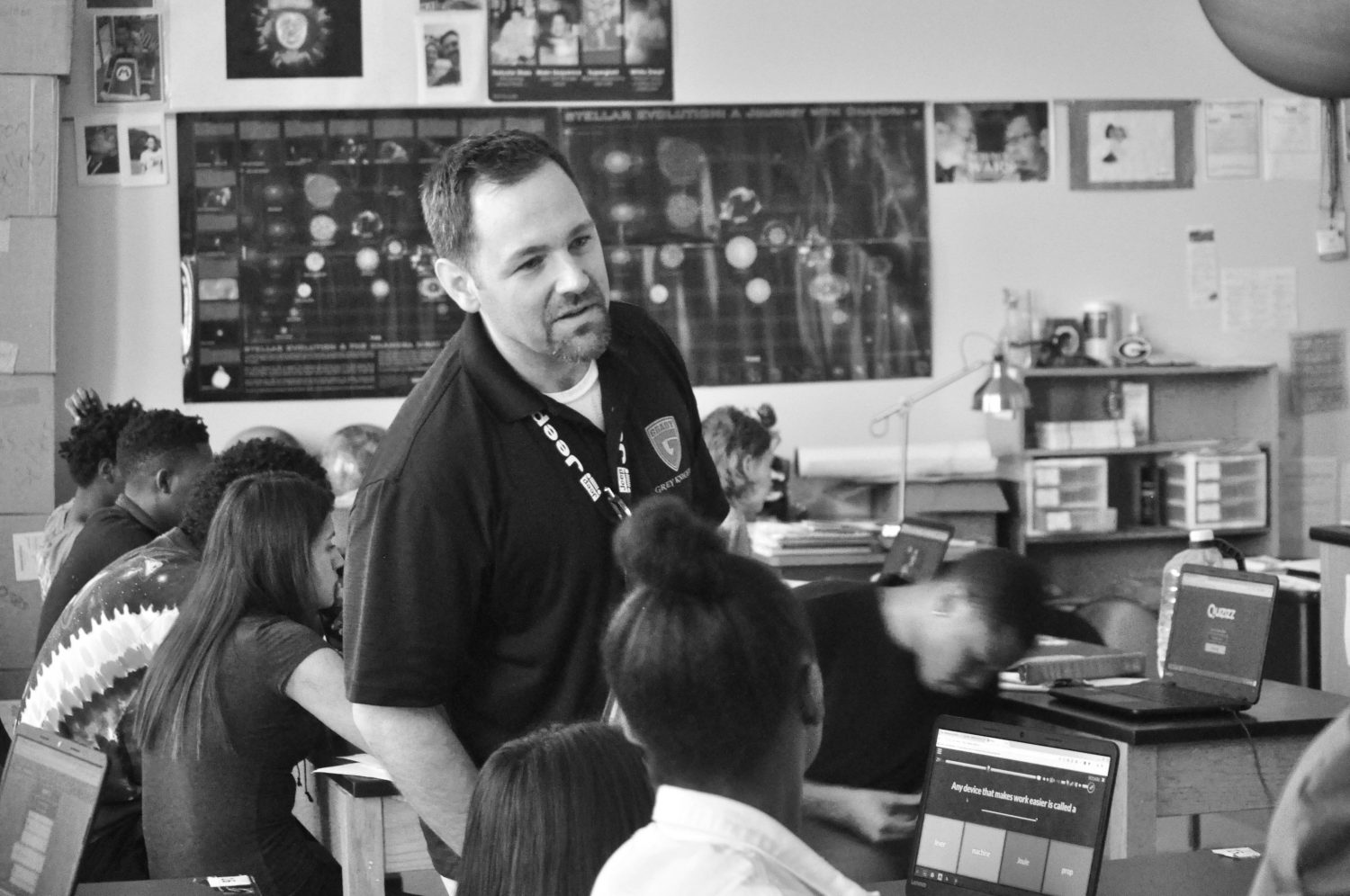 Current physical science teacher Ben Sellers reviews with his students. Sellers is responsible for designing the curriculum for Grady's new Energy and Power course, which focuses on vocational science applications.

By Mei Nathan and Allie Scheinder

Beginning in the 2017-2018 school year, physical science will no longer be offered and seniors will have the option to take a new course called “Energy and Power.”

“The science department is taking on a new life,” said Assistant Principal and scheduling coordinator Willie Vincent. “A lot of schools have done away with physical science.”

Talks about changing the schedule began in October, after Principal Dr. Betsy Bockman saw a problem with class demographics in science courses. One of Dr. Bockman’s main goals is to increase diversity in the classroom and give every student equal opportunity to succeed.

Students previously had the option to take physical science as an alternative to physics. According to Vincent, a repercussion is physical science classes consistently have a much higher distribution of African-American students and lower standards compared to physics classes.

“Some students figured [physical science] was an easier way out [than physics] and some students were placed there by teachers,” Vincent said. “Dr. Bockman believes in aiming high for all students. We just have to quit saying to ourselves that our kids don’t have the skills. That’s just not true.”

Another reason Grady dropped physical science is because its feeder school, Inman Middle School, altered its curriculum to include ninth grade physical science. Because students cannot receive credit for taking a course twice, physical science at Grady would count as an elective rather than a full credit.

“Instead of being split into one class or the other, if everybody goes into [physics] it doesn’t limit your options,” said Ben Sellers, who has taught physical science at Grady for 11 years.

Physics is a prerequisite for many Advanced Placement science courses, so Vincent hopes that future students will challenge themselves in AP science classes. While Sellers is concerned some students may have trouble succeeding in physics, Vincent remains confident this is the right direction for the school.

Another goal for the science department is to better focus on careers in science. The new course “Energy and Power” offers a senior science credit option that focuses on vocational skills involving practical science applications.

“The class seemed like it could teach a much more applied science that would be more relevant to our daily lives,” junior Dhruv Mehra said. “I feel like it could be one of the most intriguing classes I’ve taken at Grady, or it could end up being one of those filler electives you do all of your homework in.”

Although this course is already included in the Georgia standards, the 2017-2018 year will be the first time it is offered in Atlanta Public Schools. Sellers, who will teach the course next year, is working to develop the curriculum.

“[The class] looks into how science is relevant to career options like plumbing, electrical work, construction and auto mechanics,” Sellers said. “For students interested in auto-mechanics, we’re going to change oil, tires and brake pads in cars. In an electricity unit, we’re going to wire outlets and lights. Grady’s focus is college and career ready, and we feel like, in the science department at least, we don’t really support the career aspect as much.”

However, Vincent said some students have dropped other sciences to take the new class.

Mehra was planning to take AP Physics 2, but decided “Energy and Power” would provide more applicable knowledge, no matter what he plans to do for the future.

“I don’t know if I will end up in any type of STEM (Science, Technology, Engineering, Mathematics) field, but I’ve always favored math and science over English and history,” Mehra said. “I also have a deep interest in creative arts. I feel like this class may be able to provide information about the physics of the world that could be relevant to my other interests.”

Many of the planned lessons for “Energy and Power” require collaboration with industry and community, as well as funding, but Sellers said the course has received lots of support.

“I’ve already gotten a grant, and I’m writing others on Donors Choose [a website that allows community members to fund educational projects and resources],” Sellers said. “I think Atlanta Public Schools will help supplement, but so much is up in the air right now, since we lost Title 1 funding.”

Sellers thinks “Energy and Power” could set an example for other APS schools, as Dr. Rabieh Hafza, APS 6-12 Science Coordinator, has discussed implementing it district-wide.

“I like to think of Grady as the trendsetter,” Sellers said. “We’re setting the bar and leading the way. [“Energy and Power”] is still science, but it’s thinking beyond high school.”