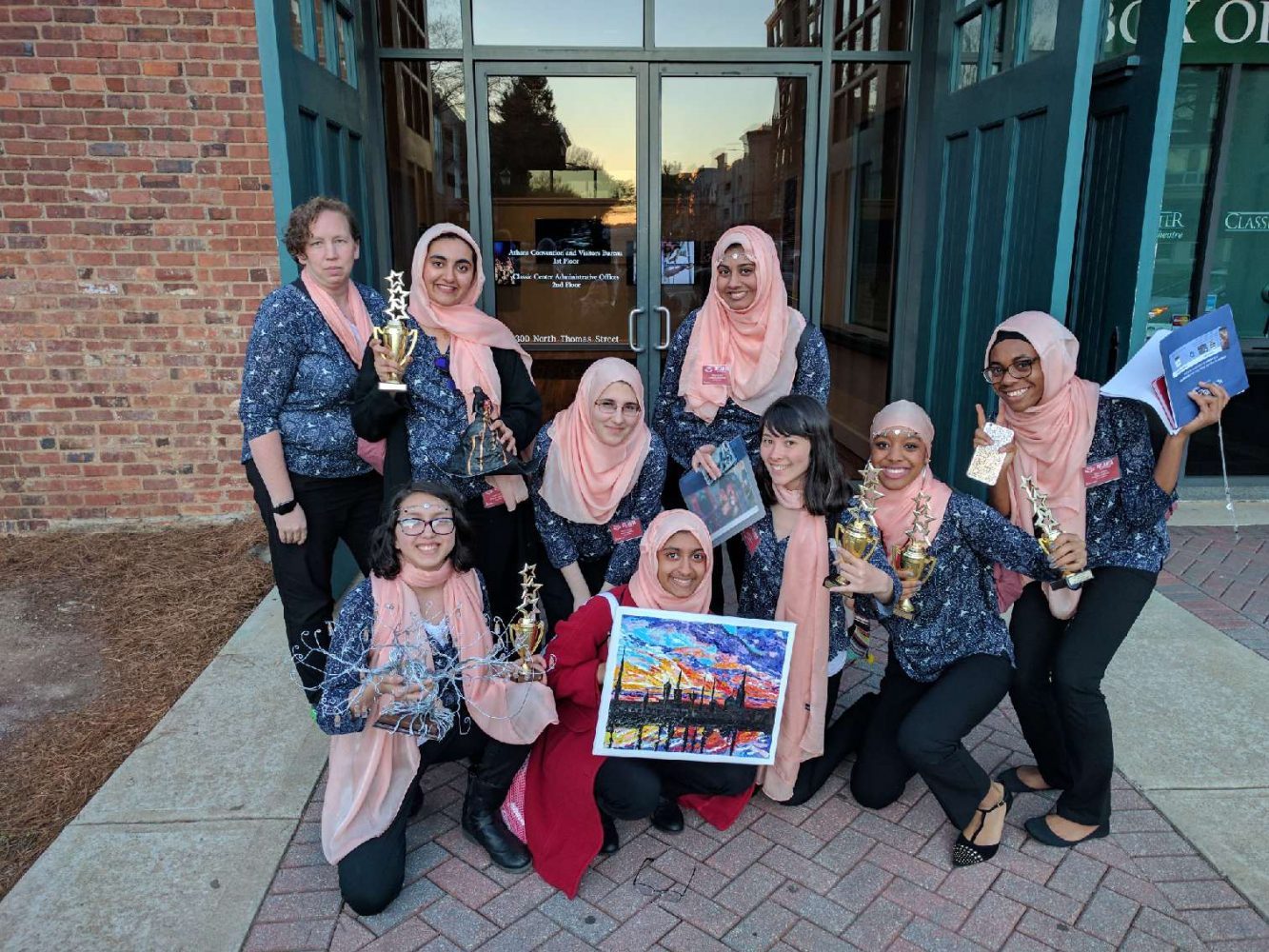 The Grady Muslim Students Association showcase their awards won during MIST, including second in photography, first and third in 3D art, and first place in spoken word.

Amid the political climate, in which President Donald Trump is attempting to establish an immigration ban targeting Muslims from six Middle Eastern countries, the Grady Muslim Student Association (MSA) celebrated Islamic culture at the Muslim Interscholastic Tournament of Atlanta (MIST).

“MIST brings people together and it’s free of politics,” senior MSA president Rwan Hayek said.  “We are all there just for the fun of it. You forget about all the problems there are and the Islamophobic sentiment in America right now.”

MIST Atlanta, which was held from March 17 to 19 at the University of Georgia, draws high school students from all over the state to participate in a series of competitions and workshops.

“MIST is a great educational opportunity for anyone who is interested in broadening their socio-environmental knowledge,” said MIST Atlanta registration lead Fatima Jamil. “We have MIST talks and workshops that are geared toward developing critical thinking skills, while promoting a greater understanding of Islam.”

In 2002, Shazia Siddiqi founded MIST in Dallas, Texas and Ahmed Salim brought the event to Atlanta in 2004. The organization now hosts MIST competitions in 15 different regions of the country.

“MIST is especially important for young Muslim students because for one weekend they are not the minority,” Jamil said. “They are finally surrounded by people who look like them, and they can feel a sense of belonging at MIST that they may not feel in their schools.”

While a majority of participants at MIST are Muslim, both Muslim and non-Muslim students are encouraged to attend.

“People think Islam is a strict religion and that we don’t have fun, and we don’t understand the culture,” Hayek said. “I love seeing people who are non-Muslim coming to the event for the first time. It shows that people get it and want to be a part of our community.”

Junior Nina Hannaford, who does not identify with a religion, said she has learned to be more openminded from her experience at MIST.

“Talking about different topics, I’ve learned how open people need to be to understand,” Hannaford said. “And you need diversity in a community to further better the community.”

Grady’s MSA team first went to MIST Atlanta last year. The team, which was comprised of only four members, put little emphasis on deadlines and preparation.

“This year, the group is so much more dedicated,” said Vickie Vinson, MSA sponsor. “They are really preparing and working hard on their events.”

The Grady MSA was one of 58 teams competing at the competition. With three new members, the team signed up for nine events, including debate, 2-D art, spoken word and short film.

For her event in photography, junior and MSA member Nina Hannaford was inspired to photoshop different people together.

“Diversity is beautiful and you can find beauty in things that are different and simple at the same time,” Hannaford said.

Instead of directly incorporating Islam, many of the events revolved around the program’s theme. The theme for the program was “The Challenge of Beauty: Striving for Perfection in an Imperfect World.”

“Beauty in this world can be found or created in every situation, amid every challenge and even within every ugliness,” Jamil said. “I find this to be the essence of Islam, because Muslims are supposed to be constantly striving to be aware of their purpose and live up to their highest ideals.”

Although the team was excited to bring a bigger team to MIST, it had to account for new challenges including more costs.

“It’s more stressful,” Hayek said. “There is clothing, food and other costs added on, and we don’t get any support from the school.”

To pay for the additional costs, the team has fundraised by selling baked goods and henna tattoos.

“They’ve had to pay for it all; so, they’ve had to do a lot of fundraising, which is a good thing because it’s built a camaraderie among them,” Vinson said.