the Southerner Online • May 24, 2017 • https://thesoutherneronline.com/64065/dining/quest-for-the-best-masterfully-spun-milkshakes/ 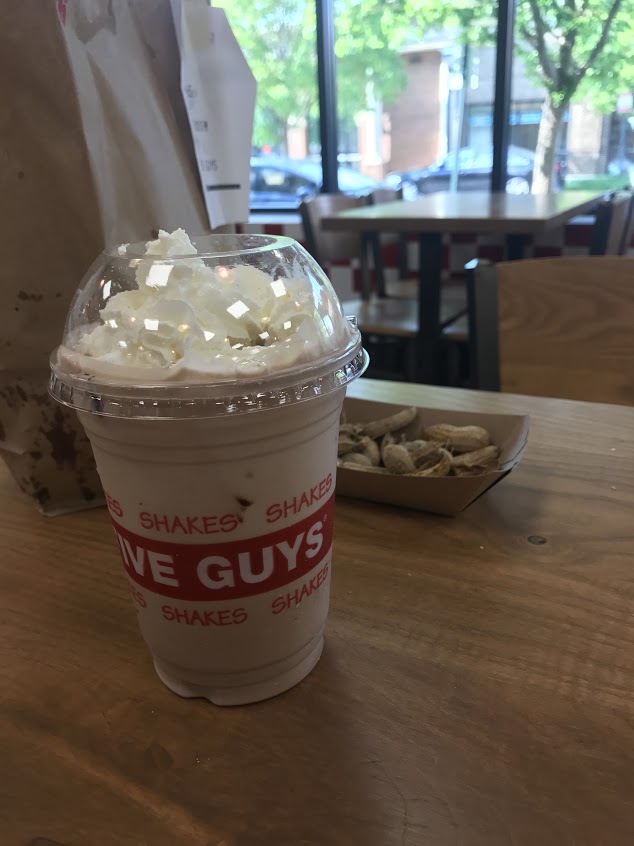 Despite its higher price, we rated Five Guys the highest

As school draws to a close and temperatures rise, it is the perfect time to search for the Grady area’s most appetizing milkshake.  Our journey for the most mouthwatering frosty treat led us to Grindhouse Killer Burgers, Five Guys Burgers and Fries and Cookout.

The first stop on our tour was Grindhouse Killer Burgers, located at 1842 Piedmont Ave.  As two first time visitors to a Morningside staple, we came in with high hopes due to its golden reputation.

Upon our arrival, we were disappointed to see the hefty price tag of $4.99 for the most basic shake on the menu.  However, we had invested too much time to turn back empty handed, and we settled on the chocolate shake.  After a wait of only a few minutes, we were served our shake.  Although it was slightly smaller than what we were expecting, we were excited to finally begin the taste test.

The shake was creamy, but the flavor was subpar, leaving us dissatisfied with our $5 expenditure.  The nicest thing about the restaurant was the setting, as the spacious porch and hip interior provided a perfect setting for a casual lunch or dinner.

The next stop on our trip was Five Guys Burgers and Fries, at Edgewood Retail District, 1253 Caroline St. Five Guys is more of a chain than Grindhouse, with the former’s almost 1,500 worldwide locations clearly dwarfing the latter’s four, three of which are in the Atlanta area.

As two Five Guys fans, we arrived expecting quality.  The restaurant, which has long been an Atlanta favorite for its stellar burgers and fries, recently added milkshakes to its menu. The price tag was slightly high, with a cost of $4.49. The ordering process was unconventional, as you order a shake and then choose what flavoring you want mixed in.  The unlimited free mix-ins, of which there were eleven, ranged from bacon to peanut butter.  We settled on a shake with chocolate and cherry mixed in.

The rich chocolate perfectly complemented the cherry, making the shake more memorable than the Grindhouse version.  The 11 mix-ins offered provided an unbelievable amount of possible combinations, the wait was short, and the staff was superb.

Our final stop was a Grady favorite, Cookout.  Located at 544 Ponce De Leon Ave NE, it is only a stone’s throw away from Grady.  The convenience inherently made it an attractive option, so the only real question was if the shakes could impress.

Like Five Guys, Cookout had a large selection to choose from with 40 milkshakes on the menu, ranging from staples like strawberry to exotic options like push pop or peach cobbler.The price of a regular milkshake was $2.79, but another option on the menu, the tray, offered one main entree, two sides and a fountain drink for only $4.99, with the option of switching the drink to a milkshake for a $1 upcharge.  For comparison’s sake, we again ordered a chocolate shake.

There is only one problem with a Cookout shake; it is nearly impossible to drink.  Really, the shake is pretty much just ice cream in a cup.  However, this was not a bad thing, as the ice cream was expertly crafted with the perfect mix of sweetness and flavor.  Overall, Cookout was the fastest and cheapest option, with the added convenience of a drive thru.

You can’t go wrong with Five Guys or Cookout, and the choice really comes down to personal preference.  The best option if you want a classic, delicious shake and don’t mind paying for the privilege is Five Guys.  However, for the average cash-strapped Grady student, the best choice would be Cookout, the speediest and cheapest of the three. Grindhouse offers a decent shake, but cannot match the affordability of Cookout or the taste of either of the two other options.