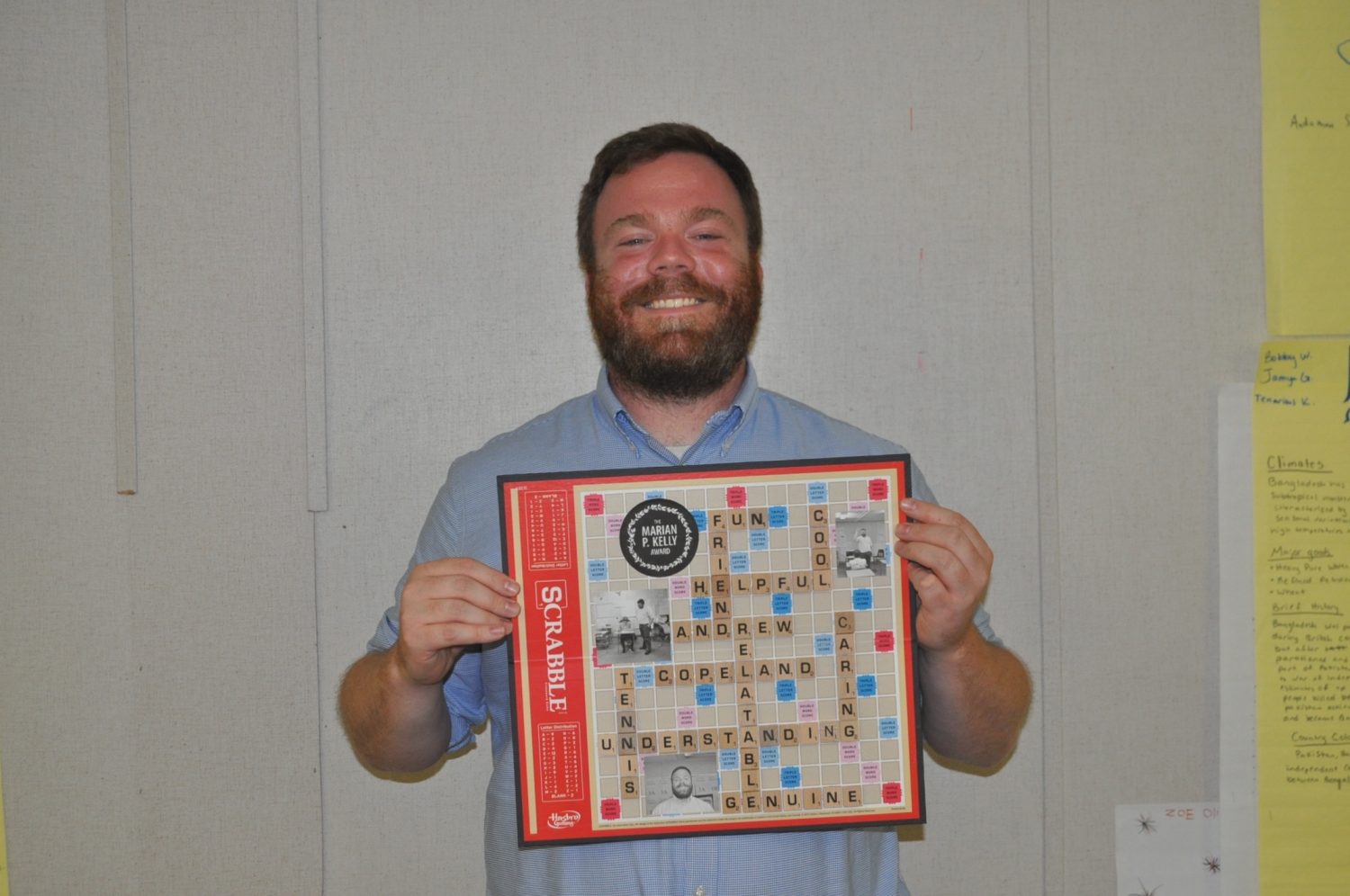 Mr. Andrew Copeland shows off his personalized award. Seniors nominated Copeland because of his relatable attitude and fun teaching style.

By Max Nevins and Jordan Killenberg

At the end of every school year, Grady’s senior class chooses its favorite teacher to be the recipient of the annual Marian P. Kelly Award. Named after former Grady English teacher and Language Arts Department chair Marian Kelly, the award goes to the teacher whom the senior class regards as being the most influential and inspiring during their years at Grady.

The 2017 senior class selected Mr. Andrew Copeland, Grady AP Psychology and World  Geography teacher, as the winner of the coveted award. Copeland has tought at Grady for three years and serves as the coach of the tennis and mock trial teams, both of which have experienced recent success.

“[Copeland] was the teacher sponsor and coach of the tennis team during its best season in recent history,” senior and tennis team captain Jon Lerner said. “He has really helped the boys’ team reach its potential.”

Beyond making an impact on his students, Copeland has also developed good relationships with his fellow teachers.

“It was hard to be a new teacher, especially in the middle of year, and he was very helpful [to me],” said math teacher Peyton Williams who started teaching at Grady in the second semester of the 2014-2015 school year. “He’s got a great sense of humor and is very sarcastic, so I imagine his classes are pretty interesting.”

Grady teachers also recognize that Copeland stands out to students and can see why the senior class voted him as the Marian P. Kelly award winner.

“He has a good relationship with his students, so he tries to make his classes more interactive,” Grady math teacher Talyssa Hunter said. “A lot of classes here are more lecture-based, but in his classes, like his AP Psychology class, students are able to participate more, which is not what a lot of teachers do.”

Many students credited Copeland’s friendly and outgoing attitude as a reason for his win and said he creates a comfortable learning environment.

“Mr. Copeland is relatable because he openly expresses his thoughts and troubles to all of his students,” senior Lauren Little said. “This in turn gives his students the feeling of freedom to express whatever is on their mind back to him.”

Because of his close relationship with his students, Copeland teaches his classes in a unique manner.

“Mr. Copeland has a teaching style that makes me excited to learn more and experience new things,” senior Genevieve Furtsch said. “I think it’s really hard for a teacher to do that.”

Copeland’s inspirational character also impacts his students and may have brought him recognition.

“I think because of how easy it is to talk to Mr. Copeland, it’s almost hard to not feel inspired or influenced [by him],” senior Camrin Beckman said.

Beckman also felt that Copeland was different than other teachers because of his unique and respectful treatment towards students.

“He’s in a position of authority inherently as a teacher, but he doesn’t take advantage of that,” Beckman said. “He doesn’t talk to you like you’re inferior or a little kid which I feel is the more common approach of a lot of teachers. There’s a baseline of respect that you receive when interacting with him.”

Above all, his students expressed that his passion for his subject and for teaching makes him stand out.

“He genuinely cares about what he does, and it really shows,” Beckman said. “[His passion] makes you motivated to grow and find your way into something that makes you as happy as teaching makes him.”