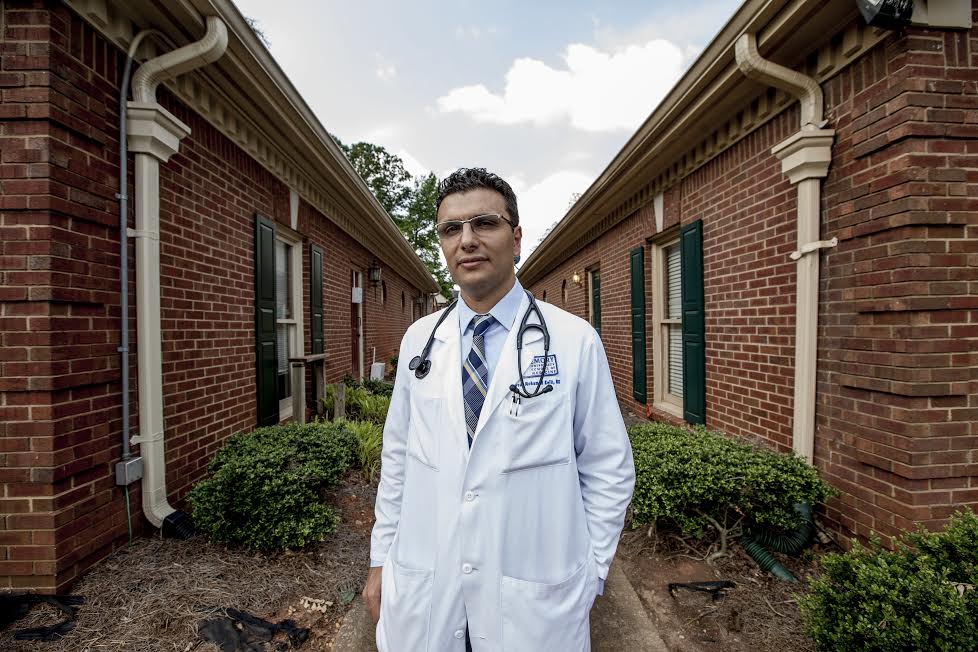 Heval Kelli came to the United States as a Syrian refugee two weeks after the September 11th attacks. He was a scared 18-year-old kid, forced to be the breadwinner of his home after his dad fell sick and his mother could not find work, all while trying to finish his senior year in high school and get into college the next fall. He was a part of one the first refugee families resettled in Clarkston, now one of the most diverse communities in the nation, ten miles outside of Atlanta

The Kelli family was forced to leave their home in 1996 after they began to fear for their safety, and eventually made it to a refugee camp in Germany.

“One day, the police came to our house, looking for things and arresting my dad, and it wasn’t safe for us to stay in Syria anymore,” Kelli said. “We were oppressed by the government.”

They would have to reapply for asylum in Germany every six months, living mostly in crowded refugee camps where they were  forced to share restrooms, not allowed to leave the city without permission, and given just enough food and money to survive. After two years of vetting and interviews by the United States, they were finally granted refugee status, and arrived two weeks after the most devastating attack on American soil.

Kelli could not speak English besides, “My name is Heval.” The family was afraid of how they would be treated in their new home and did not leave the confines of their house for the first two days in Atlanta. Then, members of All Saints’ Episcopal Church, on of the largest refugee resettlement agencies in the state, showed up to their door.

“The second that All Saints’ members came to our house, and that a Christian church welcoming a Muslim family right after September 11, we knew there was something special about America,” Kelli said.

Kelli was young enough to be enrolled as a senior at Clarkston High school. He knew that he wanted to be a doctor, with the intent of giving back to his community. With that goal in mind, Kelli still had to pass all his graduation requirements in school, take the SATs, and apply to college.

With all of this on his plate he also had to learn to support his family through a local job. He soon was able to get work washing dishes for 30 hours a week right after school and on the weekends.

“I realized that washing dishes did not require much intelligence. You put the dishes in the machine and wait for it to wash, and in the meantime, I had a bit of time,” Kelli said. “I used the dish washing time to repeat everything in class in my head, and at the same time practice English. So if I washed dishes for 30 hours, I was pretty much studying for 30 hours.”

Not only did Kelli use his time out of school to further develop his education, but he was also able to build on his studies through the friendships he established at  school.

“There was a guy in my class who was failing calculus, and he realized that I didn’t speak English but was good at calculus,” he said. “Every morning he would teach me English and I would teach him calculus.”

Not only has Kelli found his own success, he has also worked tirelessly to provide relief to refugees in situations similar to his own 16 years ago. Along with Natasha Alladina, he is helping to set up a program, which he hopes to develop into a non-profit, that helps mentor and provide for individual refugee families. Alladina wants to work toward making the program a pipeline for establishing relationships with other Americans and the community outside of just Clarkston. She says that apart from just being there for the families, the group also tutor them, takes them to the zoo in the warmer months, and give them a better sense of Atlanta. In the future, they also want to focus on the broader refugee perception in America.

“Heval’s idea is to change the narrative. When people think about refugees they think just about resettlement and getting them resources, food, and a place to live,” Alladina said. “But he wants to focus on empowering refugees to be self sufficient and to get a professional career.”

Kelli is aslo a mentor to other young refugees, one of those being Hasib Amir. Amir came to the United States from Afghanistan two years ago, able to get asylum because his father worked with U.S. Military forces. He had already completed high school in Afghanistan and says it was tough for a refugee with a high school diploma to get into college.

“When I came here I didn’t know anyone. It was really hard for us, and people at these refugee apartments weren’t able to tell you where to go and how to get the right person to get you,” Amir said. “It is a very challenging process to kids who are coming who already have high school diplomas. There is no way for them to discover the process.”

He eventually met Kelli through Barbara Thompson, who often assists refugee families through All Saints’, and was a part of the Church’s greeting party to the Kelli family in 2001. Thompson was vocal in that many refugees are like the Heval she met 16 years ago; a passionate, but scared kid with so much to offer to society.

“Refugees go through a 16 step screening process.  There are over a million refugees and their contribution to the country is shocking. For me, Jesus is really clear, all religions are clear, that you have to be kind to the stranger in your midst, and you have to be kind to refugees,” Thompson said. “Is there some risk involved? There is risk involved in any friendship.”

Kelli then mentioned the American dream, and that it goes beyond finding your own success.

“Becoming a doctor is a dream. While that can happen somewhere else, what makes it American is that someone recreated that dream for me, and now I am recreating that dream for someone else,” Kelli said. “That is what defines the American dream: the ability to take your dream and provide it for everyone else.”

Amir spoke of a similar message, saying that his grandfather in Afghanistan would tell him that America is the land of opportunity, and that knowledge fuels success. He pointed to Kelli as the embodiment of this promise.

“Dr. Kelli is an amazing person,” Amir said. “By giving back to the community and working hard, he is a symbol for what a refugee can do.”