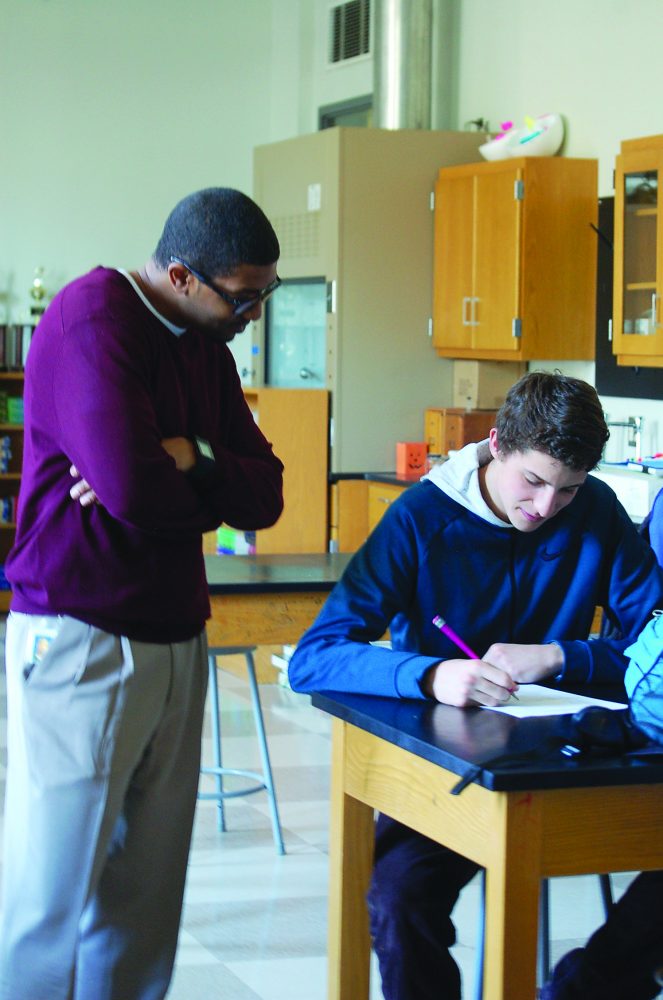 Growing up in Warner Robins, Ga., Grady Biology and AP Environmental Science teacher Pierre Davis was a basketball standout, whose potential pointed straight to the NBA.

“I thought [basketball] was what I was supposed to do and what I wanted to do,” Davis said. “But basketball is competitive, and there’s no guarantee you’re going to make it [to the NBA].”

Despite his family and community’s expectations, Davis made a choice to focus on academics, and he attended Morehouse College on an academic scholarship.

“Looking back, though, I never regret my decision to give up [basketball],” Davis said. “It was the right thing to do at the time, and it gave me a more solid direction for my future. We’re always going to have choices, and even though I could have pursued something else, this choice put me where I am now.”

Several more choices led Davis to eventually pursue a teaching career, but he originally planned to pursue science, majoring in pre-medicine. Yet after working several years in a Quest Diagnostics medical lab, Davis was unhappy.
“It just felt like a job,” Davis said. “I didn’t really feel like I was making a difference, and at that point, I just was trying to determine what I wanted to do. I decided to listen to my cousin when he suggested teaching. Teaching allows me to make a difference on my students every day.”

For Davis, education has always been about more than just academics. He tries to use his life experiences to connect with students on a personal level.

“If my students want to learn from what I’ve learned, I’m here,” Davis said. “I offer my knowledge, my wisdom and my assistance.”

He believes that no matter what background students come from, there is always room to succeed and that philosophy is something that is apparent when teaching.

“He’s the kind of teacher who really wants us to succeed and be happy,” senior Caroline Bray said. “He’s a kind and genuine person, and I like that in him.”

To Davis, the students at Grady are a dream to teach because he started teaching at such vastly different schools. His career as an educator began at an alternative school with a heavy gang population. Alternative schools such as the one where Davis taught for four years, now Forrest Hills Academy, focus on providing education to students whose behavioral problems make it difficult for them to learn at traditional public schools.

“Pretty much every student was involved in some kind of gang,” Davis said. “They were from different parts of the city, so I ended up seeing a lot of violence in classrooms. That kind of behavior doesn’t belong in society, let alone in a school.”

Rather than discouraging Davis, this introduction to teaching inspired him.

“My first year as a teacher, I saw so many kids with not just academic deficiencies but also social deficiencies,” Davis said. “My biggest impact ended up being on the social side of things.”

The alternative school where Davis worked had a population of what he called “mainly underprivileged African-Americans.” Many of his students had unstable home lives that were similar to how Davis grew up.

“They were drawn to me because they saw themselves in me,” Davis said. “We had a lot in common, and I took an interest in their lives outside of school. I was an example to them of how you can work hard and get out of a certain situation.”

His first four years at an alternative school altered the way Davis views his mission as a teacher.

“Teaching is more than just about passing a standardized test or making the grade,” Davis said. “It’s about life lessons.”

Senior Alex Lin appreciates the low-stress environment around which Davis structures his classroom.

“We sometimes had class outside because the fresh air and sun is good for us, and as a result of his own laid-back nature, he wants to make students feel the same way,” Lin said.

He includes social issues and other topics in biology discussions because he deems those topics vital to the study of life as a whole.

“The first week I had him, he talked a lot about his past experiences and his own struggles,” Bray said. “That just made us have better understanding of him.”

After leaving the alternative school, Davis taught for five years at Booker T. Washington High School. In 2014, Davis transferred to the all male B.E.S.T. Academy before moving to Grady mid-semester in the fall of 2015 to fill the place of the then-vacant freshman biology teacher position.

“Everyone [at Grady] was just so warm and welcoming when I got here,” Davis said. “It seemed like I was part of a family from day one. The students have been great, too. Many of the kids other teachers would call ‘difficult’ are really not at all that difficult compared to other students I’ve taught.”

Even though the connections he makes with Grady students are different than those he made at previous schools, he still serves as a support to students by taking an interest in more than just academics.

“I think it’s important a student knows you care about their future regardless of where they come from and regardless of what they look like,” Davis said. “Students don’t care how much you know until they know how much you care. And it only takes one to make a difference.”