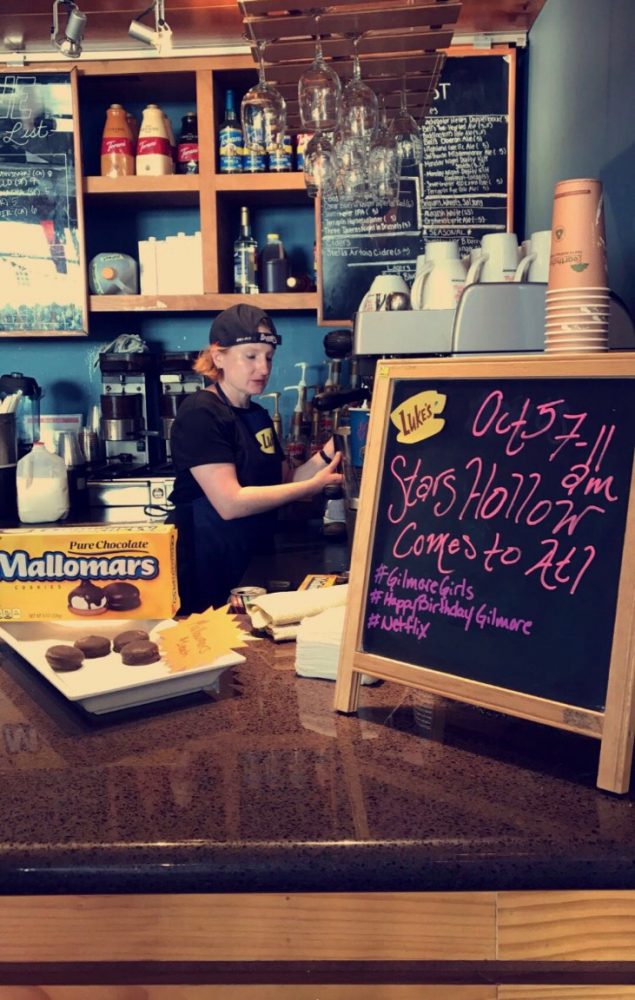 By: Kaitlyn Carroll and Tabby Hatem

The typically relaxed environment of the North Highland Java Vino has been replaced with a loud, anxious crowd of Netflix-lovers. On October 5th, Java Vinos all across the United States and Canada transformed their looks to mimic Luke’s Diner, a small diner from the popular TV show Gilmore Girls.

To promote a four episode revival of Gilmore Girls coming out in November, Netflix sponsored Java Vino to create the illusion of being Luke’s Diner for a day. Although there were no menu changes, Netflix offered free coffee from 7am to 12pm and sent props used in the TV show to Java Vinos everywhere.

“Netflix sent us three aprons, three hats, and a couple of signs.” said Diana Lancaster, manager of the North Highland Java Vino. “We were then encouraged to do more on our own. We painted our windows with little curtains like they have in the show and placed ketchup and mustard bottles and napkins on the tables that [Luke’s Diner] has too.”

These seemingly minor changes were enough for Gilmore Girls fans to wake up bright and early to get the Luke’s Diner experience.

“It was the busiest the shop has ever been in our 12.5 year history,” Lancaster said. “The line out the door got as long as a 2 hour wait. We had over 1,000 customers all together. Everyone had a great time, despite the wait.”

Employees at Java Vino enjoyed the experience even though they weren’t familiar with the show. Page Munn, who has been working at Java Vino for six years, had no idea that the Gilmore Girls theme would attract so many customers.

“We expected people, of course, but the line out the door for so long was unexpected,” Munn said. “Even after we ran out of free coffee and promotional materials, people still waited in line just to get inside.”

Decatur High School senior, Lilliana Campbell, was one of the many Gilmore Girls fans who came for the experience and not for the free coffee. Unlike many of her friends who stopped by, Campbell was able to miss the long line and receive her coffee within a few minutes.

“It was cool to see Java Vino transform into Luke’s Diner,” Campbell said. “When I walked inside I actually felt like I was on the set of Gilmore Girls.”

Inside, there are many quotes from the show hung up on the walls and typed out on the coffee cups, the Luke’s Diner logo on the menus and outside the shop, and even a Gilmore Girls snapchat filter customers were able to get on their phone. Similar to the show, the employees wore flannel shirts and backwards hats identical to the owner of Luke’s Diner, thus enhancing the experience.

“The promotion also got me really excited for the revival,” Campbell said, “I can’t wait to see what happens.”