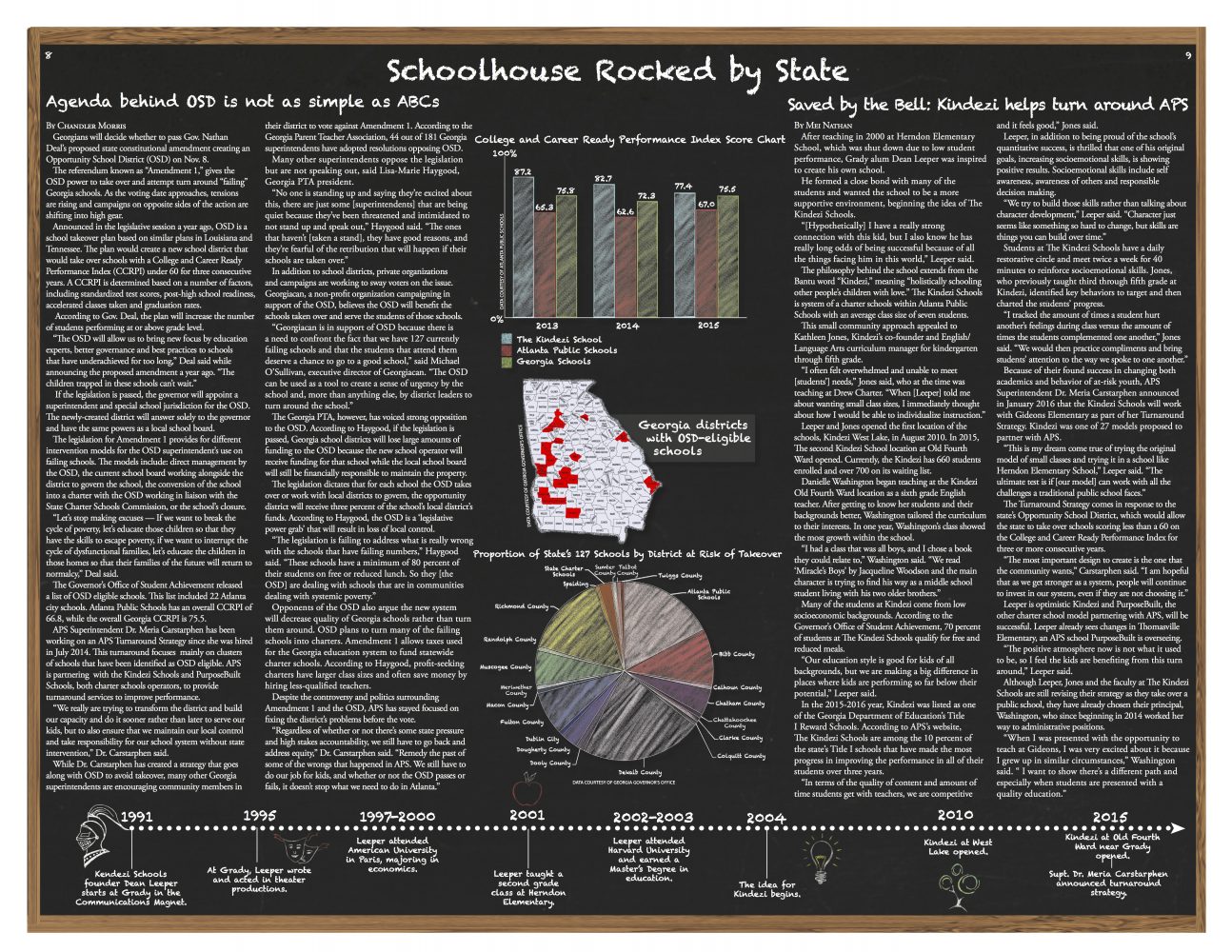 After teaching in 2000 at Herndon Elementary School, which has been down due to low-performance rates, Grady alum Dean Leeper was inspired to create his own school curriculum. He formed a close bond with many of the students and wanted the school to be a more supportive environment, beginning the idea of The Kindezi School.

“There’s a visceral impact of feeling like I have a really strong connection with this kid, but I also know he has really long odds of being successful because of all the things facing him in this world,” Leeper said. “I could see a train coming at them and [the school] was a place the kid has to go to as the train goes closer and closer.”

The Kindezi School is a charter school within Atlanta Public Schools with an average class size of seven students. The philosophy behind the school extends from the Bantu word “Kindezi,” meaning “holistically schooling other people’s children with love.”

This small community approach appealed to Kathleen Jones, Kindezi’s co-founder and English/Language Arts curriculum manager for kindergarten through fifth grade. At the time, Jones was teaching at Drew Charter.

“I often felt overwhelmed and unable to meet [students’] needs,” Jones said. “When [Leeper] told me about wanting small class sizes, I immediately thought about how I would be able to individualize instruction.”

Danielle Washington began teaching at the Kindezi Old Fourth Ward location as a sixth grade English teacher. After getting to know her students and their backgrounds better, Washington tailored the curriculum to their interests. In one year, Washington’s class showed the most growth within the school.

“I had a class that was all boys, and I chose a book they could relate to,” Washington said. “We read Miracle’s Boys by Jacqueline Woodson and the main character is trying to find his way as a middle school student living with his two older brothers.”

Many of the students at Kindezi come from low socioeconomic backgrounds. According to the Governor’s Office of Student Achievement, 70 percent of students at The Kindezi School qualify for free and reduced meals.

“Our education style is good for kids of all backgrounds, but we are making a big difference in places where kids are performing so far below their potential,” Leeper said.

In the 2015-2016 year, The Kindezi School was listed as one of the Georgia Department of Education’s Title I Reward Schools. According to APS’s website, The Kindezi School is among the 10 percent of the state’s Title I schools who have made the most progress in improving the performance in all of their students over three years.

“In terms of the quality of content and amount of time students get with teachers, we are competitive and it feels good,” Jones said.

Leeper, in addition to being proud of the school’s quantitative success, is thrilled that one of his original goals, increasing socioemotional skills, is also showing positive results. Socioemotional skills include self-awareness, awareness of others and responsible decision making.

“We try to build those skills rather than talking about character development,” Leeper said. “Character just seems like something so hard to change, but skills are things you can build over time.”

Students at The Kindezi School have a daily restorative circle and meet twice a week for 40 minutes to reinforce socioemotional skills. Jones, who previously taught third through fifth grade at the Kindezi School, identified key behaviors to target and then charted the students’ progress.

Because of their found success in changing both academics and behavior of at-risk youth, APS Superintendent Dr. Meria Carstarphen announced in January 2016 that the Kindezi School will work with Gideons Elementary as part of her Turnaround Strategy. The Kindezi School was one of 27 models proposed to partner with APS.

“This is my dream come true of trying the original model of small classes and trying it in a school like Herndon Elementary School,” Leeper said. “The ultimate test is if [our model] can work with all the challenges a traditional public school faces.”

The Turnaround Strategy comes in response to the state’s Opportunity School Districts, which would allow the state to take over schools scoring less than a 60 on the College and Career Ready Performance Index for three or more consecutive years.

“The most important design to create is the one that the community wants,” Carstarphen said. “I am hopeful that as we get stronger as a system, people will continue to invest in our system even if they are not choosing it.”

Leeper is optimistic Kindezi and PurposeBuilt, the other charter school model partnering with APS, will be successful. Leeper already sees changes in Thomasville Elementary, an APS school PurposeBuilt is overseeing.

“The positive atmosphere now is not what it used to be, so I feel the kids are benefiting from this turnaround,” Leeper said.

Although Leeper, Jones and the faculty at The Kindezi School are still revising their strategy as they take over a public school, they have already chosen their principal, Washington, who since beginning in 2014 worked her way to administrative positions.

“When I was presented with the opportunity to teach at Gideons, I was very excited about it because I grew up in similar circumstances,” Washington said. “ I want to show there’s a different path and especially when students are presented with a quality education.”