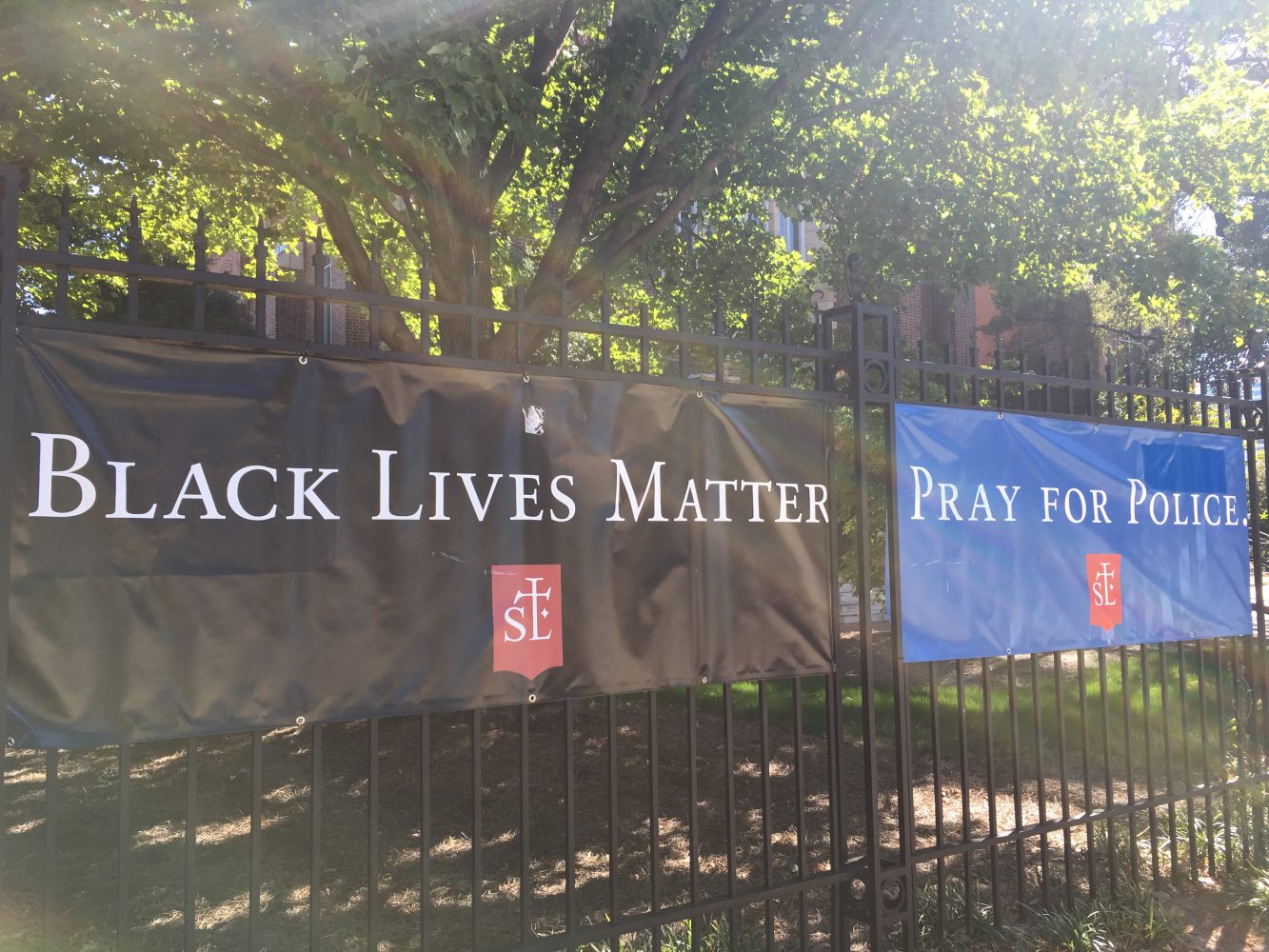 By James Bryan and Katie Earles

In Dr. Martin Luther King’s 1963 “Letter from the Birmingham Jail,’’ he wrote the church should not act as a thermometer that recorded the ideas and principles of popular opinion, but rather as a thermostat, setting the temperature for the rest of society.

Fifty-three years later, social movements demanding racial equality have not ended, and neither has the involvement of churches in such movements.

“The history of America has been a nation of sociopolitical movements,” LaFawn Gilliam, a member of Racial Reconciliation Task Force and St. Luke’s Bridge Builders, said. “The Black Lives Matter movement will take its place in American history, too. Faith communities can be true to their faith traditions while at the same time respecting all peoples who are different in religious beliefs and ethnicities.”

Many in the Grady community regularly attend a religious organization; some wish churches would be more involved in current social movements, specifically, Black Lives Matter..

“Although my church does a lot with race relations, we definitely could be more involved,” said senior Catherine Moore, regular attendee of St. Luke’s Episcopal Church. “Each time there’s a shooting, we talk about the state we’re in as a country and how that needs to change, but we haven’t done anything about it.”

The Rev. Tim Black, an Associate Rector at All Saints’ Episcopal Church in Atlanta, believes churches need to address issues of racial tensions more openly. While he acknowledged that All Saints’ has not been particularly active in Black Lives Matter, he said the church still heavily supports the movement’s foundations.

“By saying black lives matter, you are saying all lives matter,” Black said. “Part of a church’s job is to point out and help people who are marginalized.”

The Rev. Kim Jackson, also an Associate Rector at All Saints’, has been heavily involved in various social movements, including advocating against capital punishment and supporting BLM, which she calls the “21st century civil rights movement.’’

“[The Episcopal Diocese of Atlanta] is really trying to explain to its parishioners what BLM is and how it is more than just kids shutting down the freeway,” Jackson said.

BLM sparked from the 2012 killing of 17-year-old Trayvon Martin in Florida; however, other instances of police brutalities toward African Americans have fueled the movement. Jackson also pointed to other disparities —such as economic inequality, inequitable education and mass incarceration — that BLM hopes to change.

“This movement forces America to recognize and hopefully affirm the lives of black people who are deprived of basic human rights and dignity,” LaFawn said. “Black lives that are targeted and intentionally left powerless at the hands of government/state policies.”

Jackson has been heavily involved with the BLM movement since 2014, leading discussions about racism with the Episcopal Diocese of Atlanta, attending rallies, opening up her home to younger people involved in the movement and working with other clergy members to combat racism.

“It is important to engage in meaningful work with black people and black leaders,” Jackson said. “I would much rather have an Episcopalian go and have meaningful conversations with their black colleagues that they never bothered to get to know than for them to show up at a rally.”

Jackson, however, also echoed Black, saying churches in Atlanta could be doing more to support the movement. While she always encourages parishioners to attend rallies, Jackson believes there is a better forum for participation.

“I think we could talk about [BLM] more,” said junior Cameron Newton, and active member of All Saints’. “We tend to only talk about [race relations] when there is an event that just happened, but it might be beneficial to talk about it even when it is not currently in the news.”

Jackson credits Atlanta’s physical distance from the core issue that sparked BLM as a reason for lack of participation. She traveled to Ferguson, Mo. in 2015 for the anniversary of Michael Brown’s death, whose 2014 shooting sparked mass riots and drew national attention. While admiring the activism of churches in Ferguson, she knows churches in Atlanta will eventually participate more.

“On the ground, in Ferguson and St. Louis, the Episcopal Church is doing really great things,” Jackson said. “Here, in Atlanta, [BLM still feels removed from us in many ways. I think we are very much in the beginning stages.”

The Rev. Markel Hutchins, a civil rights activist and proponent of the BLM movement, spoke at St. Luke’s Episcopal Church in October and discussed his views on the movement.

“People of Christ have the capacity to be light in dark places,” Hutchins said. “Atlanta didn’t lead the civil rights movement by segregating; we will never progress if we separate our language and segregate our morality.”

Often, police officers will not know the communities in which they work, which leads to disconnect, Hutchins emphasized. To help improve his understanding on the reality of police officers, Hutchins went through a series of ‘shoot, don’t shoot’ exercises. Through this newfound understanding, Markel created the idea of One Church One Precinct (OCOP), an organization that aims to reduce tensions and strengthen relationships between officers and the communities they police.

“We have to work along with law enforcement,” Hutchins said. “Every police officer’s beat or precinct will be adopted by a house of worship in which they work. It is not ‘us vs. police officers’; we are not as divided as we are disconnected.”

So far, OCOP has 15 congregations to act as pilots for future precinct-parish pairs. These houses of worship include synagogues, mosques and various Christian denominations. Hutchins hopes OCOP will spread across the country.

As a preliminary step for OCOP, Hutchins accompanied the 15 faith leaders from the parishes involved in the pilot of OCOP through a series of life-threatening police exercises, where the faith leaders had to act as police officers.

“The goal is to extend the olive branch; we must stand in solidarity with police officers,” Hutchins said. “Our problem is not training or in weaponry, it’s in our hearts and minds. Only the body of Christ can fix that.”

Outside its gates, St. Luke’s sends messages of love to the downtown Atlanta community. Police have often been viewed as antagonists of the BLM movement, but these banners echo Rev. Markel Hutchins’ encouragement of cooperation between officers and the community.