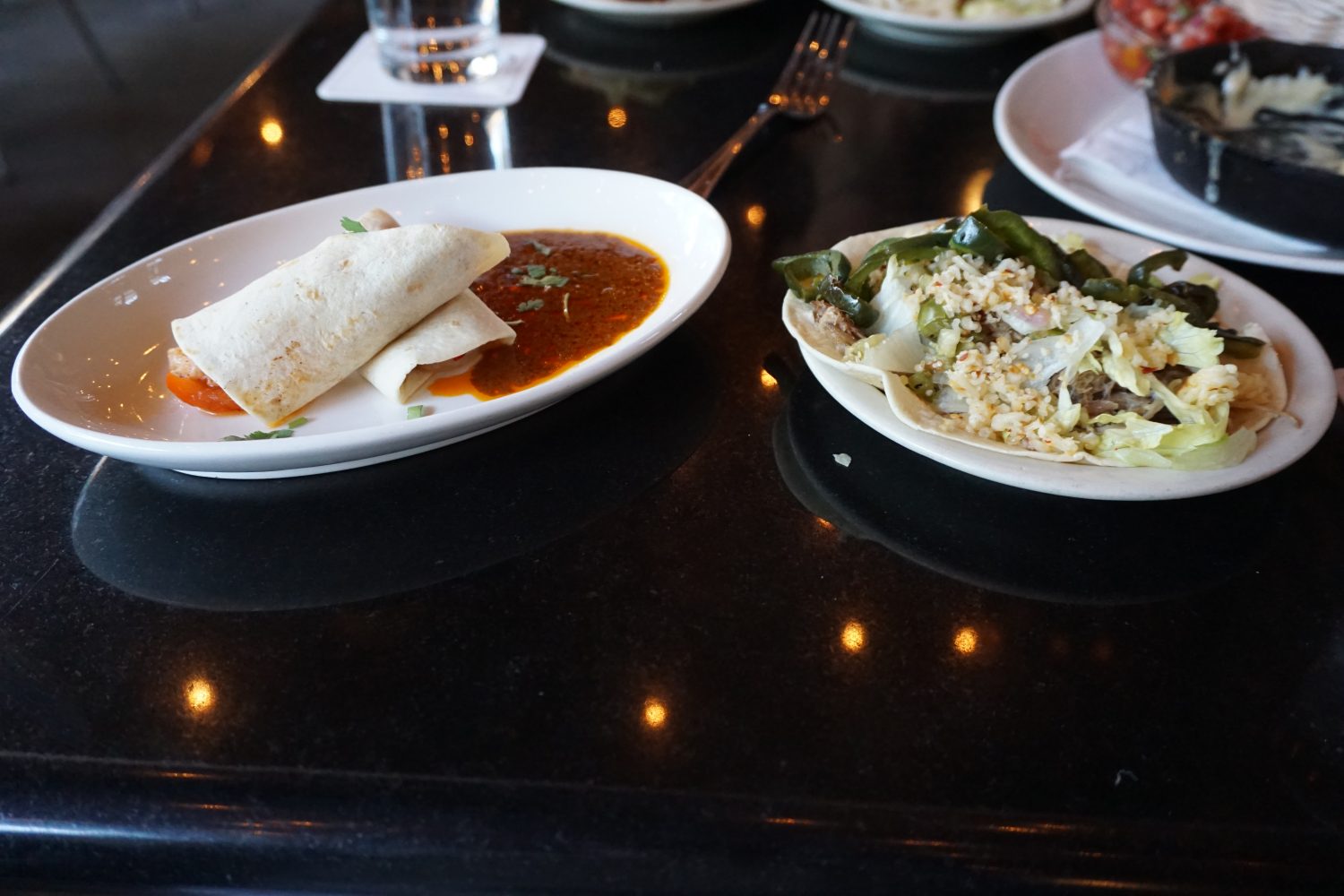 Taco Cowboy serves up flavorful and affordable dishes. Pictured here are the Carnitas and Nashville tacos.

By Parker Killenberg and Max Nevins

We were some of the new restaurant’s first customers, so we did not know what to expect.The interior part of the restaurant is centered around a bar while the outdoor deck is surrounded by trees and flowers. Not only were we able to try some great food, but we also got to speak to the mastermind behind the menu.

Chef Tom Catherall, owner of Taco Cowboy, has been a chef for 53 years and opened Noche as part of his Atlanta restaurant empire thirteen years ago. A master chef, Catherall used to operate fourteen restaurants around Atlanta until a divorce left his wife in control of his establishments which soon went out of business. While the rest of Catherall’s restaurants closed, he reopened Noche as TomTom is February. When TomTom became inoperable due to legal issues, Taco Cowboy was born.While the name may have changed, many dishes have stayed the same.

“Our cowboy taco is the same as our old trailer park taco,” Catherall said. “ And, we’ve always had farm to table food.”

Catherall purchases all of his food locally and values the authenticity of freshly prepared cuisine.

“Our tortillas are hand-made every morning,” Catherall said. “ You can look in the back. We don’t have a microwave. My conscience wouldn’t allow it.”

Customers like Michelle Cape have followed Catherall from Noche to TomTom to Taco Cowboy and appreciate his welcoming manner and good food. Cape and her husband drove around an hour just to try Catherall’s new restaurant.

“We’ve been coming to Tom’s restaurants for 17 years, “ Cape said. “He definitely has a following.”

While we enjoyed talking to Catherall and the other diners, our favorite part was undoubtedly the food.

Starting off with a “snack”, we tried the handmade skillet queso.

“We make our queso with many different cheeses,” Catherall said. “It’s not just a block of Velveeta.”

The blend of flavors from the different cheese Catherall adds to his queso proved an exciting addition that was flavorful and unique, tasting different than your average cheese dip.

Following our appetizer, we ordered four tacos: the Cowboy, the Nashville, the lobster, and the carnitas.

The classic Cowboy taco boasted rich flavor with fresh pico on the top of juicy fried chicken and queso. Similarly, the Nashville taco included fried chicken but was enclosed in white bread with sour pickles. Topped with lettuce and a creamy ranch sauce, the Nashville taco proved to be both an interesting and delectable choice. Both tacos were four dollars. These exquisite tacos were adequately priced for the quality of the food.

The lobster taco had a flavorful kick with a delectable sauce and smoky taste. An excellent option for a seafood and Tex-Mex lover, the lobster taco had a unique taste although it had a higher price tag of eight dollars. The carnitas taco was juicy and palatable and was topped with green chiles and jalapeno jack. The carnitas taco was four dollars. Paired with the hand-made flour tortillas, our taco quartet was thoroughly enjoyed.

To finish off our meal, we enjoyed a seasonal pumpkin cobbler topped with caramel sauce. Served with vanilla ice cream, the fresh dessert ended the meal with a seasonal touch, bringing light to the farm to table phenomenon that Catherall values.

Our meal was was simple yet tastefully complex. The traditional Tex-Mex food had a unique aspect which came from the mix of ingredients and combinations. In addition to the great food, Taco Cowboy boasts specials including “Taco Tuesday”, offering half priced tacos. I truly enjoyed my meal and would recommend Taco Cowboy to anyone in the Atlanta area seeking a relaxing, casual, and tasty dining experience.