MLK improves ahead of new stadium 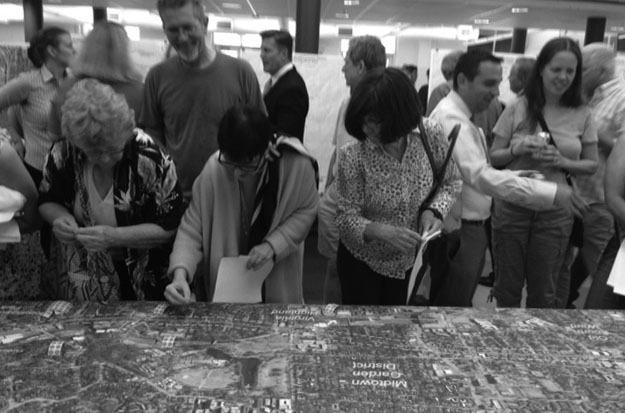 THE ROAD TO CHANGE: Community members gathered in Grady's Cafeteria to hear about the city's improvements to Monroe-Boulevard. The plans will likely include a bike lane to make the area safer for bikers.

With the recent construction and buzz surrounding the new Mercedes Benz football stadium, efforts to improve the neighborhood around the stadium have increased.

Within the past few years, organizations such as the Arthur M. Blank Family Foundation and Westside Future Fund have donated money and time to the area, adding parks and even implementing a new, innovative policing method.

Now, they will be able to add more to Westside Atlanta by completely redoing Martin Luther King, Jr. Drive (MLK) with $10 million from federal grants.

The funding for the reconstruction of MLK comes from Transportation Investment Generating Economic Recovery (TIGER), a grant program run by the U.S. Department of Transportation. Since 2009, the program has given other funding to Atlanta projects, including $18 million for the development of the BeltLine in 2013 and $47.7 million to support the construction of the Atlanta Streetcar in 2010.

“We were very happy that we were presented with this complete street scheme for MLK, and the TIGER grant made this all possible,” said James Tyler, a neighborhood activist who has been working with the project since its conception. Tyler lives in Kevin Heights, one of the neighborhoods that MLK runs through. (This has to be broken up because there is too much descriptive information about him before the second part of the quotes. Broken up quotes usually just take the attribution but there was an additional sentence here.)

“Most neighborhoods never get [a TIGER grant], and we’re so fortunate to get this grant and have it apply to MLK,” Tyler said.

City councilman C.T. Martin, whose district includes a large portion of MLK claims credit for the idea to redo the street about three years ago.

“I asked the mayor to make this one of his priorities because, for years, it’s been a main street that’s been in disarray,” Martin said. “It’d be good for everybody if we cleaned [the street] up and got the bright light back onto the street named after our most famous citizen.”

With the $10 million, the city has already begun making improvements on MLK such as extending the street from the new Mercedes-Benz stadium to the Fulton County Airport. Additionally, the city is adding art, trails, historic signs and more, and will continue to make improvements in the next few years.

One of the biggest changes is the narrowing of the street from four lanes to two in order to add bike lanes and sidewalks with the intention of making the area safer for pedestrians. Taylor also expressed hope that this change will better the neighborhoods around MLK and create a more prosperous environment.

“The improvements planned for MLK will provide a platform for future development that’s more [in] keeping with a residential neighborhood than an industrial area with a mini highway going through it,” Taylor said. “We see our neighborhoods as destinations rather than byways, and with these improvements, it might spur the type of development that many of us would like to see for our children and our elderly.”

However, many are concerned that the narrowing of the street will lead to problematic traffic on game days both at the Georgia Dome and the new stadium.

“If they cut the lanes, it would increase the traffic by a lot, downtown and all over the city,” Courtney Martin, a sophomore at Grady, said. “Honestly, the four lanes they have aren’t even enough; it should be six.”

Despite the concern about traffic many have expressed to state representatives that traffic will increase if this construction ensues, the city planning department has released a study indicating the reduction of lanes will not impede traffic in the long term.

Carrie Burns, a neighborhood leader for Castleberry Hill, an area also containing portions of MLK, understands the importance of the project but expressed concern at the lack of communication from the city.

“It’s going to be nice to have that connectivity back, but since they started and are about to open, after a few initial meetings, they never really said anything,” Burns said. “We should know much more than we do.”

Paired with the lack of channels of communication between the city and the neighborhoods affected is a seemingly haphazard and rushed job to improve the area.

Burns gave an example of a lack of planning, where the city misplaced a street light on a merging street of MLK, Jr. Drive with Mitchell St.. The light now causes more traffic than is normally in the area, and only serves to further confuse the many tourists in the Philips Arena and Centennial Park area.

“It’s actually a little shocking actually,” Burns said of the light’s placement. “Some of the lights they just put up block other lights depending on the angle you’re driving, and the city didn’t warn us about that.”

Despite receiving $10 million for the project, the program is still $38 million short, which Councilman Martin hopes to find through taxation, the private sector or the sale of bonds. Martin said he plans to accomplish this fundraising alongside Atlanta Mayor Kasim Reed, who has openly shown his support for what he calls this “vital project” for the city of Atlanta.

In the meantime, they will continue to make improvements on the street with the ultimate goal of bringing businesses, restaurants, new jobs and housing to Westside Atlanta.

“We want the street named after Martin [Luther King, Jr.] to be the best looking street in the country, and we want the community uplifted,” Martin said. “We want to do that to improve our population, to encourage more people to come and visit, to come and look, and to come and live.”