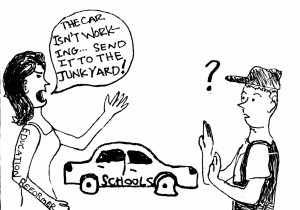 The Atlanta Public School system faces all kinds of serious issues: the “alleged cheating” on the CRCT, Grady’s loss of the all-important AYP status, graduation rates that perhaps aren’t as impressive as they seemed and a school board that can’t manage to keep it together.

Everyone and their mothers knows exactly what’s wrong with public school in America, but no one can agree what, exactly, that is. Are the tests too hard? Too easy? Should schools be smaller? More focused? More rigorous? It seems like every year, some new gimmick is touted as the new miracle cure for schools.

But that’s just the problem: students don’t need gimmicks. Students don’t need “innovation” or better technology. We don’t need different tests or small learning communities. This is not to say that Smart Boards can’t be useful or that SLCs haven’t changed lives for the better, but you cannot trick a child into caring about school. Those gimmicks are simple fixes for a complicated problem and are, ultimately, a waste of money. The problem isn’t the systems that are already in place. There was nothing wrong with Grady’s communications magnet or with the math curriculum that the seniors learned, but these were changed anyway.

Schools are obsessively searching for this unattainable goal: a perfect system. Every politician and superintendent wants to create “successful” schools, but we can’t even agree on the definition of success. In their frantic search for the impossible, schools have lost sight of the obvious.

I was listening to a story about environmentally efficient houses on NPR the other day, and the quote that closed the story was, “The greenest houses are the ones that are already built.” Replace “greenest” with “most successful,” and suddenly schools become a homeowner obsessed with becoming more eco-friendly. Every year, the homeowner tears down his or her house so they can rebuild it with more efficient insulation and more sustainable bamboo floors.

This process is endlessly futile. We don’t need an educational revolution. We don’t need to spend millions of dollars developing a “better,” more rigorous curriculum. The curriculum is plenty rigorous. Word walls and sponge sheets don’t make teachers better, and neither do Smart Boards. Kids who don’t care about education won’t be interested no matter what themed SLC you put them in. By the time kids get to high school, it’s too late to make them care. So get ‘em while they’re young—by improving elementary schools.

When I say “improvement,” I don’t mean “higher performance” or forcing little Billy to spell 37 four-syllable words by fourth grade. From their first day of school, we have to show kids that education is meaningful and exciting and important. We must stop belittling students and teachers by forcing them to jump through policy-mandated hoops.

My most vivid memory from elementary school is from third grade. During recess, we would sneak cups of water outside into the sandbox, but the water always immediately sunk into the sand. When I was 8, this was the bane of my existence.

In science class that year, we collected a bucket of mud and added water until the mud was saturated. When we poured water into a trench we’d lined with the mud, the water didn’t sink and disappear. It seemed to be magic, but it wasn’t magic: it was science.

This is what I mean when I say improvement. That sense of wonder has certainly dulled through the years, but it’s not something you ever lose completely. I went to a private elementary school, but the most important thing I learned was how to be excited about school. Maybe other private-school hallmarks like small classes or individual attention are impossible in a public school, but sincere lessons that actually matter to students aren’t. It would probably cost more, but if we taught kids to care about school from the start, we could stop wasting money on gimmicks.

This story earned a Superior rating in the Commentary category at the Georgia Scholastic Press Association Awards Assembly on April 28, 2011.