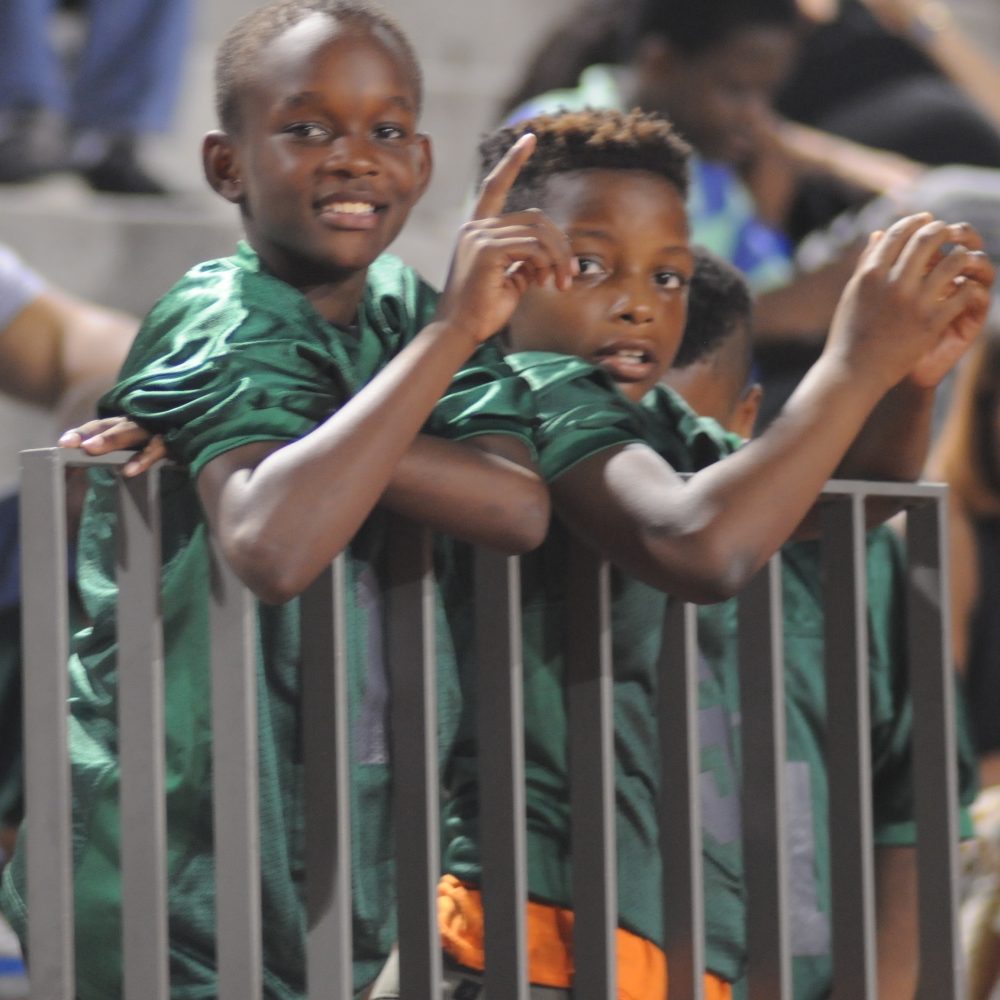 Grady held its annual cluster night Friday, drawing a large crowd to the stadium to watch the Knight’s football team demolish Decatur 54-0. Grady’s cluster was invited to watch the game as one, with students and teachers from Inman and the cluster’s elementary schools including Centennial Place, Hope-Hill Elementary, Mary Lin, Morningside, and Springdale Park, according to Grady Athletic director Myss Johnson-Jelks.

“I planned cluster night because I felt like it would be a great opportunity to bridge the gap between our elementary and middle school,” Coach Jelks said.  “It’s a great feeling to see the kids excited about cluster night.”

A fraction of the large turnout were parents and families from a variety of schools, including Tim Langan, a father of two Grady cluster students. Over the years, Grady football games have become a tradition for his family.

“It’s been awesome to see the big turnout for games and the community coming out tonight,” Langan said. “Cluster night is great to get the younger families here to see one of our premier events at grady and get exposure to the student athletes to get them more familiar with the school.”

E.Rivers Elementary School, Kendezi Charter School, Dobbs Middle School, and Kipp Charter School joined Grady’s Royal Elegance team during the halftime show. Younger football players from the elementary schools had the opportunity to stand on the sidelines to watch the Grady football team before they walked onto the field and waved to the crowd during half time. According to Johnson-Jelks, cluster night provided a way for the future students of Grady to get a closer look into what their high school lives will be like, along with pulling in other members of the community.

“I love the community of Grady, because the students come from all around the neighborhood,” Langan said. Other parents agreed that the diversity of the school is one of the main ways it appeals to them.

With the younger crowd filling the stands, Grady students showed their spirit with a “blackout” themed student section, topped off by glitter, maroon pom poms, and cheering. The school spirit didn’t seem to dull for this game, according to junior Jadyn Smith.

“Tonight lets the kids coming to our school see how much fun we have, and we have even more people to support our sports team,” Jadyn said. Overall, the attendees seem to agree that this year’s cluster night was a success, compared to the early ending of last year’s.

“Cluster night truly represents the motto of our school; Individually we are different, together we are Grady,” Jelks said.