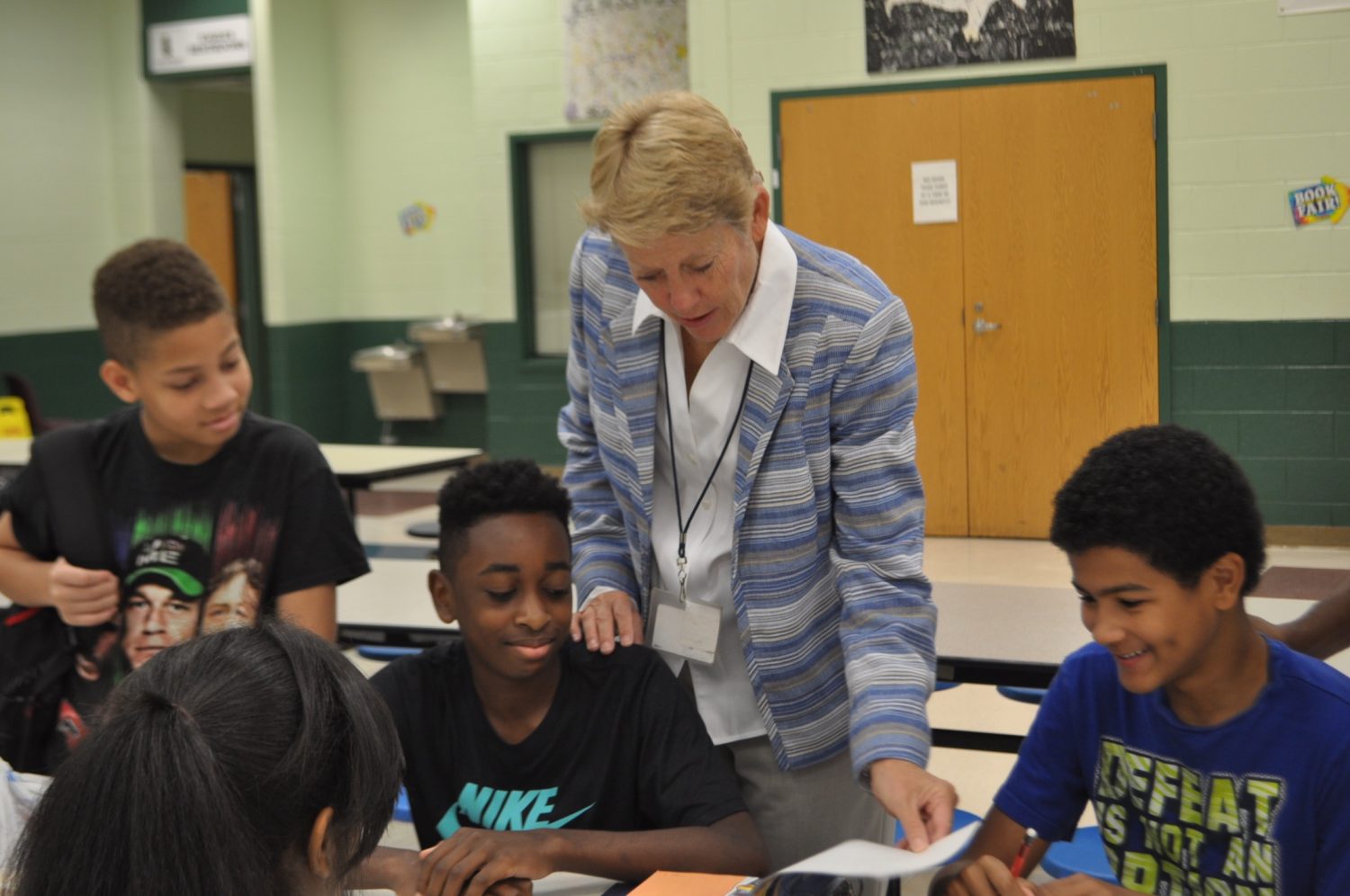 Dr. Betsy Bockman helps an Inman Middle School student with homework before school begins. Bockman plans to bring the same commitment to the school to her new job as interim principal of Grady, starting Sept 12.

Dr. Bockman has worked in Atlanta Public Schools for two decades and has served as principal at multiple APS schools, including feeder schools Morningside Elementary and Inman Middle. Dr. Bockman has worked at over 10 different schools, holding positions from principal to physical education teacher and high school coach. She has spent almost 20 years working in APS.

“These school communities were all very different,” Dr. Bockman said. “Those differences forced me to adjust my perceptions and expectations to the situation at hand.”

“She was a teacher, a coach, and an assistant principal here already, so she definitely knows what works for the staff and students,” Dr. Bockman said. “She knows Inman from even more areas than I know.”

Although this will be Boatright’s first experience as a principal, she hopes her previous roles at Inman will lend themselves to this challenge.

“I love this community, I love these students, and it’s been such an honor to watch the growth and development in this community,” Boatright said. “I’m just excited to continue that work.”

Due to Bockman’s vast experience with the Grady cluster, some Inman teachers have expressed concern over the transition. Eighth grade accelerated math teacher Perry Ruder said younger teachers may start leaving because of Dr. Bockman’s departure.

“Lots of our young teachers came to work for Dr. Bockman, so I’m not sure what they will do now that she is moving to Grady,” Ruder said. “She chose them.’’

This, however, is not the first time Inman has had new administration. Since 2004, the school has had four changes in principals.

Dr. Bockman came to Inman from Morningside Elementary School in 2004. In 2011, she was promoted to Interim Executive Director for the East Region and subsequently became principal at Coan Middle School, a former APS school that closed in 2014.

When Dr. Bockman left, Paula Herrema was promoted to Inman principal. She served in that position for a little over two years, then left in January of 2014 due to health problems. Thomas Kenner, a veteran APS administrator and principal, served as Inman’s principal for the remaining three months of the 2013-2014 school year.

In the 2014-2015 year, Dr. Bockman made her return and served for two and a half years before her departure for Grady.

“Dr. Bockman comes across as a strong, but compassionate leader,” said Cindy Sands, Inman PTA Education Vice President. “She believes it’s important to meet all of her students’ needs with the resources she has available.”

Angela Nelson, a former Inman parent and friend of Dr. Bockman, said in the 30 years of her friendship with Dr. Bockman, she has always known Dr. Bockman as a supportive principal. Nelson said Dr. Bockman has always “tried to raise the bar no matter the child’s background.”

Dr. Bockman said equality has been her priority in every position she has held.

“I want to make sure that all students are achieving and that all opportunities are open to all students,” Dr. Bockman said. “Equity issues are big for me; they always have been since I started 20 years ago as a principal.”

Having spent a good deal of time working within the Grady cluster, Dr. Bockman already has an idea of what needs to be done.

“I will take a big look at student safety,” Dr. Bockman said. “Keeping students safe on campus emotionally and physically has been my biggest concern at all the schools I’ve been in.”

Apart from safety, Dr. Bockman has big plans for not only Grady, but the Grady cluster as a whole.

“What I would like to do is create a closer relationship with Grady and Inman, so that the Grady and Inman teachers work together and talk more about academics,” Bockman said. “I want to connect the 6th to 12th grade as a conduit so parents see it as a seven-year thing — so bring those together to create a strong arts, athletic and academic community.”

According to Dr. Bockman, when she arrives at Grady, she plans to look at the policies already in place, observe how the school is run, and speak to teachers and students to determine what changes need to be implemented.

Guiney “was always laid back and really connected with the kids,” Grady PTA Vice President of  Operations Hope Stevenson said. “My daughter was at Inman while Dr. Bockman was principal, and she definitely had a different way of running things. She was more strict, in a way, but she got things done.”

Dr. Bockman said her leadership style will change with the switch from a middle to high school setting.

“I know that high school students are more independent; they don’t need quite as much structure; But, I do feel like a school needs structure, the practices and instructional policies need structure,” Dr. Bockman said. “I plan to go with what’s there [at Grady] and then see what needs to be organized in a different way.”

Paul Nicolson, supervisor of Grady’s print shop and yearbook co-adviser, said Grady is unlike other schools and needs key leadership that supports the community.

“I always felt Grady is a unique entity in that we make things happen by being together,” Nicolson said. “If you look at what has enabled us to do those kinds of things, a lot of it falls on leadership. Their ability to support and stand up for us. That’s what works. We have been very fortunate.”