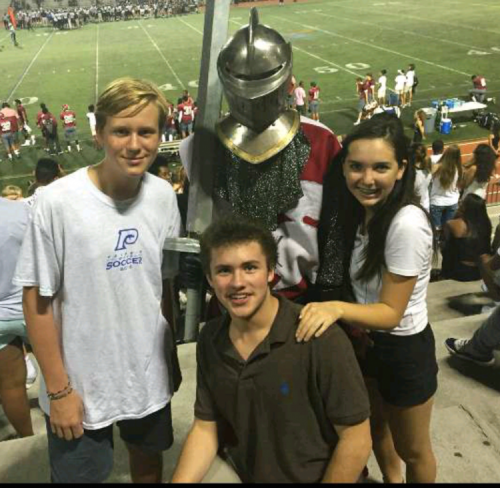 By Alex Langan and Charlie Toole

The debut of the Grady mascot was part of a winning night for the Grey Knights, which included a  53-0 rout of North Atlanta on Aug. 26 and a large turnout for the opening game of the season, complete with a rowdy student section.

The idea for a mascot came from athletic director, Myss Jelks. Upon her arrival to Grady three years ago, she began working to get a mascot.

“When I first got here, no one really knew the answer as to whether or not we had a mascot,” Jelks said. “Once Mr. (Thaddeus X.) Roberts found the clothes in his room last year, I started to try and work out someone for the job.”

The mascot featured a complete costume with a helmet, sword, and faux knight armor. There were announcements on the intercom looking for someone to take the position over the preceding weeks, but the Grady Athletic Department found their man in freshman Seth Cullen.

“I put out the announcement this year and [Cullen] was the first person to come see me,” Jelks said.

Luckily for Jelks and the Grady crowd, a freshman chose to do the job, so the position will be occupied through the 2019-20 school year. Cullen is very optimistic about his newfound occupation.

“It was pretty interesting,” Cullen said. “Especially the part where I got picked up by the fans.”

One obvious hazard during the waning days of the Atlanta summer is the high temperatures permeating the costume.

Despite the heat, Cullen kept in high spirits for the entirety of the game, boosting the overall atmosphere with his enthusiasm.

“It’s a job worth doing,” Cullen said. “It gets the crowd hyped up during the games and makes us win.”