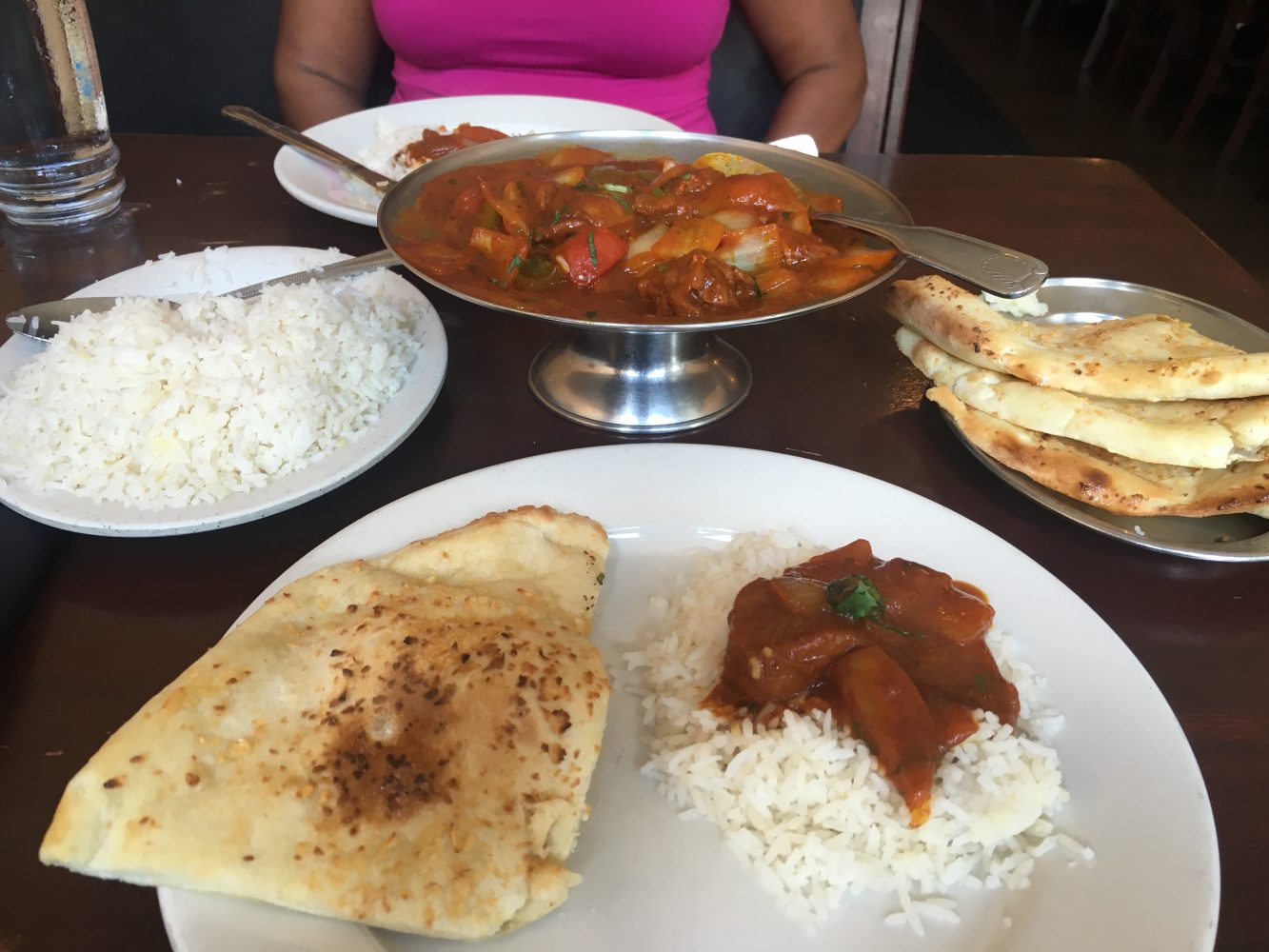 Not your average five- star restaurant, Planet Bombay Indian Cuisine is a little hole in the wall located in Atlanta’s Little Five Points. Having driven by it numerous times, my mom and I finally decided to go check it out. If it weren’t for the countless massive yellow signs on their storefront, one might not have known this place even existed.

When we walked through the door, we were immediately greeted by our host who seated us in a booth next to the window where we could view all the street activity. We were soon greeted by a lady who started us off with two glasses of chilled water and menus. Eager to peruse through my menu, I set my water aside and tried to look through the somewhat foreign context with things I was familiar with. Although I seemed to have my mind set on Indian food, I had never tried it, but I was looking forward to a fulfilling meal.

Looking through the menu, I found something that caught my eye. The lamb Bhuna. The description under the name read: “a curry stew mixed with onions, green peppers, ginger, and garlic served with rice.’’ So, we decided to go with that with medium hot spice. We also ordered some Garlic Naan bread on the side. I kept the menu, so I could later pick from the abundance of desserts after my meal.

After a f15-minute wait, the food finally arrived. Steam crept up from the food giving us a mouth- watering sensation. I couldn’t wait, so I dug in. The curry stew had a tantalizing taste, yet was lacking the final dash of salt that would bring the meal to fruition. For us to have ordered medium hot, there was no spice to it at all. The lamb was tough and chewy, resembling characteristics of beef, which my mom was not fond of.

The rice actually came as a shock to me because I expected a different approach to the rice at an Indian restaurant. Contrary to my expectations, average white rice was accompanied by the curry stew. This made our meal incomplete. The curry stew tasted as if it was missing its other half, and the white rice just wasn’t it.

I could only down about a six spoonfuls of the Bhuna before I decided I wanted to move on to the Garlic Naan bread. The bread was shaped in little triangles topped with garlicky and buttery flavor that reminded me much of the typical bread sticks that you dip into the garlic sauce. Halfway through my first triangle, I could no longer eat anymore. The bread was very dense, leaving me more than satisfied. I looked to the left where my menu was placed and realized I wouldn’t be able to get a dessert. I was overstuffed.

Overall, Planet Bombay was a decent restaurant. It is the perfect fit for that area and gives Little Five Points a great cultural feel. As for the food, I thought it was satisfactory. Although the Lamb Bhuna  had every bit of Indian tang, it was still lacking key seasonings like salt and pepper just to reach it’s perfection. The bread was the climax of my meal, which I couldn’t enjoy all that much because it was so hearty. Visiting Planet Bombay definitely gave me an exposure to Indian-cultured food, but if you are someone like me who loves to also enjoy the taste of the food, then this is not the place to bring your appetite.