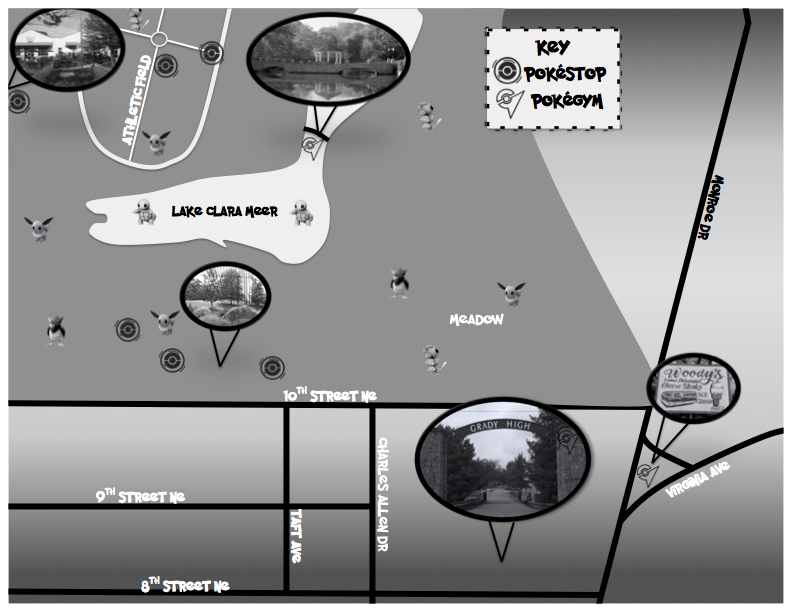 In early July, Atlantans gave little regard to the summer’s heat as Piedmont Park was flooded with hundreds playing Niantic’s new app, Pokemon Go. Eevees were captured on the lawn, squirtles haunted the lake and caterpie could be found around Piedmont’s parameters. Based on the popular Japanese franchise, Pokemon Go requires players to follow a digitized map on their phones to capture Pokemon, battle for control of gyms and find Poke Stops to refill supplies.

“This game forces people to get out in their environment,” said Andrew Copeland, AP Psychology teacher and Level 23 Pokemon player. “I saw a joke on Twitter that said, ‘Michelle Obama tried to get kids to walk for seven years; it took Pokemon Go one day.’”

Within 24 hours of its release on July 6, Pokemon Go was the number one free app on the iTunes charts. A week later, Apple confirmed Pokemon Go had broken the App Store record for downloads in its first week of release.

“We planned for success, and we provisioned our infrastructure for it,” Niantic founder John Hanke said in an interview with Time Magazine. “To be honest, we’ve been overwhelmed by the sheer number of people who want to play. It’s led to this viral explosion of interest.”

Using a combination of technologies integrated into smartphones, such as location tracking, GPS and cameras, the app leads people to Pokemon scattered throughout public landmarks.

“When it first came out, I tried to go Pokemon hunting everyday,” senior Elizabeth Khayat, Level 22 Pokemon player, said. “I’d get a group of friends together and just walk around the park or Little 5 Points.”

When the animated creatures appear on a player’s phone, the app overlays a Pokeball on a person’s view of the real world via the phone’s camera. Augmented reality is one branch of a larger sector of technology that aims to immerse users in the program.

In the 90s, virtual reality was seen as the interface of the future. Unlike Niantic, however, the multiple gaming companies that tried to incorporate virtual reality never found consumer success. Instead, scientists saw value in the programming and virtual reality helped develop enhanced learning, military training, design prototypes and therapy.

“Prolonged exposure therapy is based on this idea that symptoms arise as a result of avoidance of thoughts related to particular trauma or particular feared event,” said Dr. Marat Zanov, Director of Training at Virtually Better, an Atlanta based clinic that uses virtual reality in its therapy practices. “What prolong exposure does is it breaks that pattern of avoidance and helps the patient reorganize their thinking and process of that memory and the thoughts that are associated with that memory or fear.”

“For a person who fears heights, we place them in a virtual situation where they go on top of a building, and that serves as a good starting point for them to start addressing that particular fear,” Zanov said. “When you do this consistently enough, the patient will start noticing a decrease in their symptoms.”

“Someone dreamt they were homeless, so the virtual reality [of that dream] is filmed in high definition 360 degrees so it’s like the real world,” said Kris Pilcher, a visual design artist at the Dream Collection Agency. “There are some interactions with people in the public that give you the feeling of what it would be like to be homeless. By creating these facilities where we share dreams, we can began to empathize with each other a little bit more closely.”

“I wonder if people are overestimating if people want [virtual reality] in their lives,” Copeland said. “Do you think you want to play a game where it encompasses every sense that you have?”

Pilcher, however, sees augmented realities and virtual realities as the future of technology.

“It’s very possible to bring people together through technology,” Pilcher said. “To talk to people across the world instantaneously and be able to share this connection is important to the forward evolution of our species. We have no choice but to integrate with technology.”