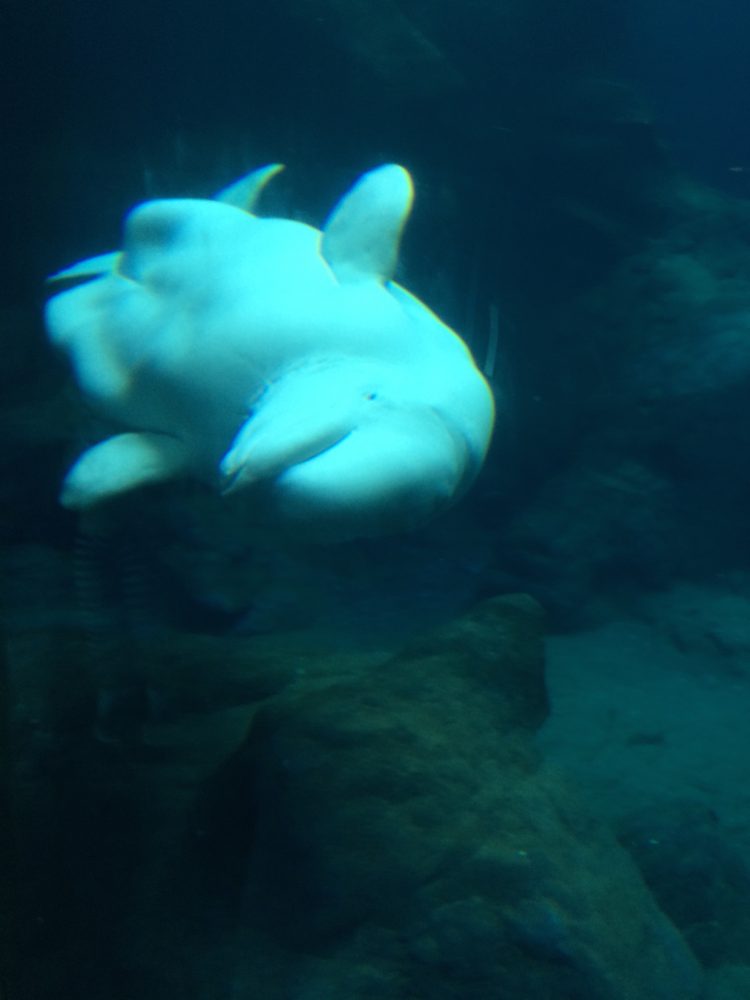 Beluga whales have been on the international list of endangered species since 2008. As their population slowly decreases, people are taking action to save these animals by capturing them and creating breeding pools. The Georgia Aquarium is one the few places that holds beluga whales in captivity. With its reputation as one of the largest aquariums in the world comes one of the biggest disputes over aquatic life in 20 years.

The Georgia Aquarium opened in November of 2005. Since then, it has consistently communicated to the public that its humane treatment of all species bolsters quality of life for the animals. In its tour of the aquarium the workers make sure to highlight this when showing you behind the scenes of the facility.

The Georgia Aquarium maintains on their website, “Exceptional preventative medical care directly relates to excellent animal health and the prevention or early detection of illness.”

Since its opening a decade ago, however, five beluga whales have died, including a calf that was born in captivity this past June. With their numbers decreasing, the aquarium sought the 18 belugas currently residing in Russia.

The aquarium started this endeavor in 2012, requesting permission from the National Oceanic and Atmospheric Administration Fisheries to import the whales. The aquarium said it was seeking to diversify the gene pool by bringing more belugas to the United States, but the NOAA fisheries denied the permit request. The NOAA said the aquarium didn’t meet permit standards and turned the request down. Many rejoiced over the decision, including the 75,000 people who signed an online petition to prevent the import. The aquarium said the ruling was unjust and filed a complaint in U.S. District Court in Atlanta 2013 to seek an overruling of the denial.

The aquarium’s lawyers argued that under the Marine Mammal Protection Act the aquarium has  the right to “protect and care for” these animals. However, the 1972 act says that how the animals are captured and acquired must meet certain standards along with the purpose for the animal’s captivity. The aquarium’s lawyers argued that their permit should fall under an exception to the act because they’re acquiring the animals for public display and conservation.

The 18 belugas wouldn’t all go to the Georgia Aquarium, but would be distributed around the United States. The aquarium also used this fact to its advantage, asserting that it would diversify the gene pool, allowing the mammals to populate. The NOAA argued that the aquarium did not meet the standards for the Marine Mammal Protection Act and that it could have a  negative effect on the current Beluga population in Russia and the United States.

Many have sided with the NOAA such as Ed Norton, Shannen Doherty and Jean-Michel Cousteau, who are activists in the green community and well known celebrities. When asked to comment on the issue regarding the whales, the Georgia Aquarium denied to comment and referred to their blog post about the belugas. “I understand that you have been in contact with my team previously as they referred you to our blog post. As mentioned before, that is all the information that is available. We will not be able to speak with you at this time or provide a quote.”

Many say this decision was made because of the already heavy controversy surrounding Seaworld. Nick Atwood, Campaign Coordinator for the Animal Rights Foundation of Florida, released a statement sayinh, “I think SeaWorld decided that their partnership with the Georgia Aquarium would only attract more protests and controversy to their parks — that’s the last thing SeaWorld needs right now.”

With so much discussion surrounding this topic, the Georgia Aquarium is now being looked at as a place of protest rather than a place of education and conservation. Whales, dolphins and sea life in general are frequently being added to the international endangered and threatened species list, and as a result many people want to capture these animals and breed them until they are in great numbers again. Others are opposed to this movement, viewing it as a tactic to put off the long term problem.

Many conservatives argue that we should examine how we are affecting the ocean and its inhabitants. One problem that no one foresaw would affect animals is all the noise we generate in the ocean. The large motors that produce deep sounds can be heard from ten miles away; this causes the belugas to lose all sense of orientation, navigation and communication.

Greenpeace, a leading organization in benefitting the environment, had much to say on the topic of the Belugas Whales. John Hocevar, Director of Greenpeace’s ocean campaign since 2004 and leader of many huge environmental campaigns, like research into the BP oil spill, was willing to comment on the issue directly to the Southerner. Hocevar went as far to say that an animal in captivity isn’t really an animal at all. “It does not make sense to try to keep belugas or other whales in captivity. They are highly intelligent, far ranging animals that do not do well in confined spaces removed from their families. In an important sense, a whale in captivity is not really a whale at all.”

Hocevar also reinforced the ideas of creating a stable environment outside the aquariums, instead of just building a bigger tank. “There is a role to play for skilled professionals to rehabilitate marine mammals that have been injured, but removing wild animals from the ocean is not a viable pathway to recovery for endangered populations. We need to find better ways to teach people about the ocean than capturing whales and sticking them in tanks.”

As the general public gets more educated on the topic of endangered species and how we ourselves are putting them there, better programs and procedures can be put into place on how to handle these topics. Many organizations such as Greenpeace, Ocean Futures Society, and Sea Shepherds Society are already fighting for this cause. As of September 28, 2015 the U.S. District Court Judge Amy Totenberg ruled in favor of the NOAA and once again denied the Georgia aquarium the privilege of importing the 18 whales. With the court ruling out, many have considered this a win for the Green community and a step forward for animal rights.