the Southerner Online • May 2, 2015 • https://thesoutherneronline.com/59614/news/guensler-pope-co-stars-in-more-ways-than-one/

Guensler, Pope co-STARs in more ways than one 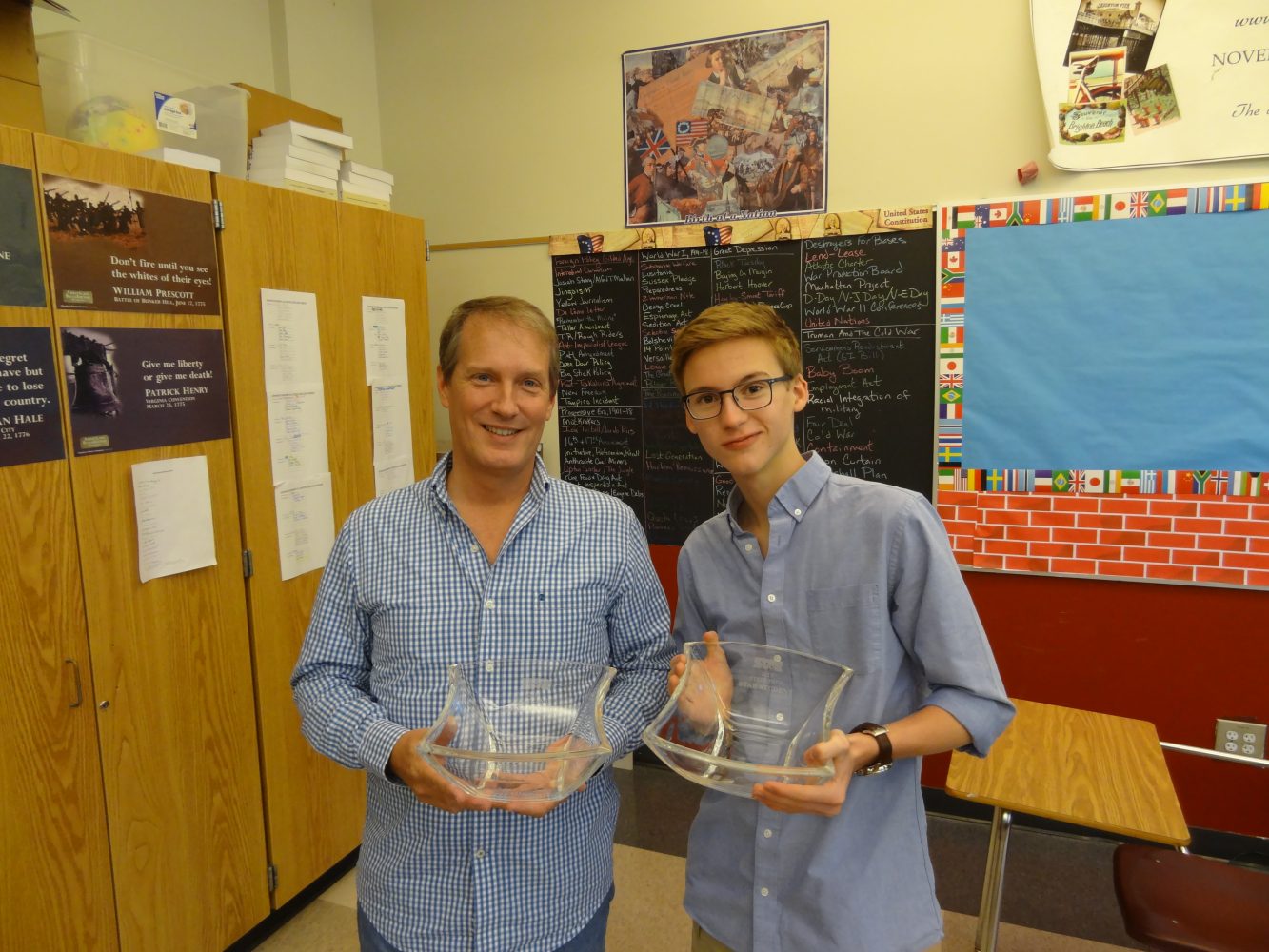 The Professional Association of Georgia Educators announced the tandem awards at its state Student Teacher Achievement Recognition, or STAR, Banquet Monday at the Crowne Plaza Ravinia. As the state winners, Guensler, 17, will receive a $5,000 scholarship (provided by AT&T Georgia) and Pope will receive a $2,500 cash prize (provided by the Frances Wood Wilson Foundation, inc.).

The award is one star in what has become a veritable constellation of a high school career for Guensler. He is the valedictorian of his class, and just closed the curtain on his 14th major role on the Grady stage.

Pope, who has worked with Guensler in musical theater for three years and has taught him in two AP history courses, says the secret of Guensler’s success lies in his character.

“Carter Guensler is an intrinsically motivated student,” Pope said. “He has what they call, ‘it!’ There is no way to describe ‘it,’ except to say it is a stage presence that flows out of his remarkable talent!”

In addition to his academic and theater success, Guensler has had the opportunity to photograph President Obama and the First Family and to conduct an in-depth interview with superintendent Meria Carstarphen for his school newspaper, The Southerner.

“The past four years have been an incredible journey—one of laughter and tears, stage kissing and stage combat, dying in a large number of performances, and learning from every single one of them,” Guensler said. “I’ve grown as an actor, as a student, as a human being.”

Guensler said that he selected Pope as his STAR teacher because of the profound influence Pope had on his high school experience and because of their genuine, lasting friendship.

“Whether in the theater or the classroom, every moment with Mr. Pope is a learning opportunity,” Carter said. “He consistently challenges me and encourages me to see things differently, and his passion for American history is effusive. Every day, he makes me look forward to what used to be my least favorite subject.”

Guensler said that Pope’s excellent mind is surpassed only by his huge heart.

“Mr. Pope’s dedication and selflessness are what make him a perfect fit for STAR Teacher as well. He once drove all the way to Alabama to find costumes for our production of Thoroughly Modern Millie. And when he found out that North Atlanta High School’s drama teacher had to leave her students for medical reasons, he took on the responsibility of directing a musical for them when he was already directing a second at his church. He runs the Saturday school for kids that need the extra help, he hosts afterschool and weekend tutorials, clocks hundreds of unpaid hours helping students and directing shows.”

Pope said that being named the 2015 STAR Teacher is a singular moment in his teaching career.

“I am so honored to be his Star Teacher,” Pope said. “I have received accolades and awards throughout my life, but I think this is by far the most special, because I have so much respect for him, his intelligence and his talent. That he selected me for this
means more than you could imagine.

As the school winner, Guensler was eligible to compete for the system, region and finally state STAR Student scholarship. In order to determine the state’s STAR student, the Professional Association of Georgia Educators (or PAGE) Foundation subjected Guensler and the 15 or 16 other STAR students with perfect scores to a rigorous selection process that included an application of eight essays as well as formal and informal interviews.

Created by the Georgia Chamber of Commerce in 1958, the Student Teacher Achievement Recognition, or STAR, program honors Georgia’s highest achieving high school seniors and the teachers who have been most instrumental in their academic development. The PAGE Foundation has overseen the STAR program since the 1990s.

Guensler is the third Grady senior to be named the state’s STAR Student. The last was in 1961, and the first was in 1958.