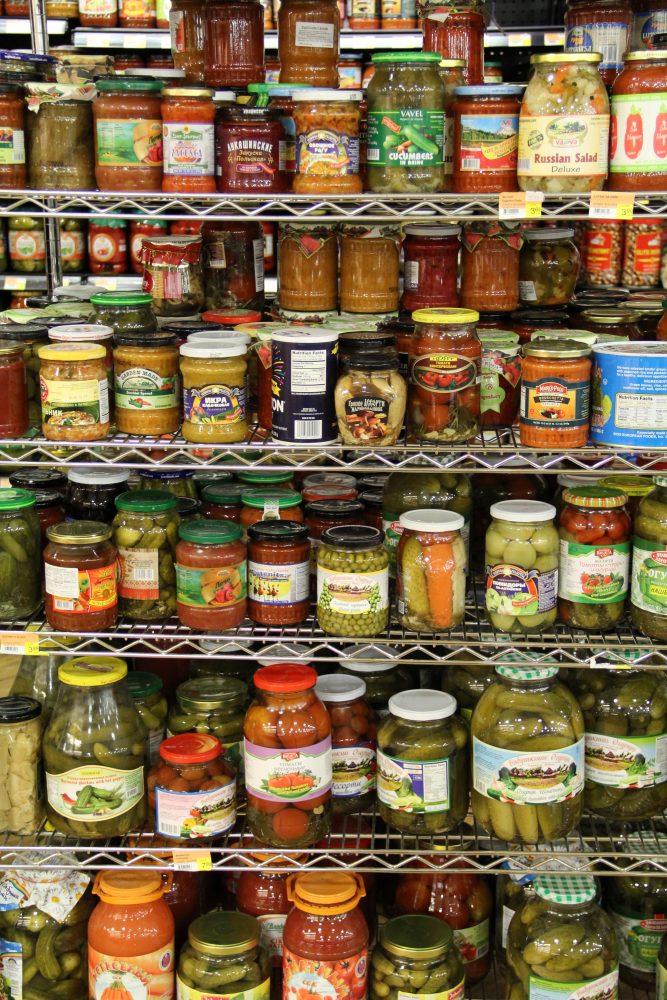 "Jars with preserved vegetables, hundreds of them."

Many Atlantants recognize Buford Highway Farmers Market for its wide variety of food from all around the world.  Just about 20 minutes from Midtown the market boasts an international array of authentic ingredients, everything from Chinese to Korean, from Mexican to Japanese, Vietnamese and many more.

Soon after my family moved to Atlanta from Russia, we were happy to see sour cream–a rareness in common western European grocery shop–in every Kroger diary department that we visited. The majority of familiar products, however, were missing—from herring to dark bread.

We could survive without all of this for the first couple of months, trying to substitute it with food from the DeKalb Farmers Market or the IKEA food shop. My mother was the first who “gave up” and asked our Russian friends in Atlanta where she could  buy some “normal, usual herring” for the Herring Under Coat.* Our friends directed us to Buford Highway Farmers Market.

It took months, though, for me personally to visit the market. I couldn’t believe my eyes as my parents got out dark bread with a Belorussian name, but produced in New York, or sweets, directly from Moscow or Minsk, tightly packed in transparent plastic bags as if they contained some deadly virus rather than chocolate. I was very excited as we drove down Buford Highway towards the market.

I expected to step into a familiar  grocery shop as if I never left my native land, but as  I entered the building of the market I confronted instead a  lot of unknown fruits and vegetables. I walked several times back and forth along the rows filled with all kinds of food with tags in several languages until I finally saw something familiar: a good old herring, as well as famous Russian caviar, both red and black, and dried, salted fish (one of the favorite beer snacks of Russian men). All of these Russian staples came in dozens of varieties. I realized that finally I was in the right place and started to look around. I noticed that right behind me were boxes of zephyr (a dessert very similar to an American marshmallow but larger and served in a different way. Russians neither roast it on fire nor add it to hot chocolate) and cookie-nuts with condensed milk. If you are inspired to try something from the Russian section of Buford Highway Farmers Market, I would say that desserts guarantee an enjoyable experience. It’s all delicious  The most striking difference is that Russian sweets are actually not that sweet, so people usually eat them with jam or honey.

The next items that caught my attention were jars with preserved vegetables, hundreds of them. Any imaginable harvest from  “Granny’s Garden” was available: cucumbers, tomatoes, zucchini, cabbage, peas, even carrots. Next I saw something that I bet you will see only in Russian section of the market: medicaments. There were no sophisticated antibiotics, but rather all kinds of folk medicine remedies, vitamins and other health supplements. One of the most outrageous things was badger fat, nasty for me but helpful and magical for Russian mommies. I walked farther and saw variety of bottled drinks: kvass, Baikal (herbal version of Coca Cola), Tarhun (kind of herbal, green Sprite), lemonade and Duchess (pear lemonade).

But I still felt like something was missing and realized what it was as I passed ladies, looking suspiciously at my camera, who were slicing Russian smoked sausages and other meat along with French cheese. There they were! In the next refrigerator, with much space between stood several kinds traditional dishes: Olivier, Herring Under Coat and other beetroot fancies, meat cutlets, mince with carrots in pepper or wrapped in cabbage leaves (golubtsy), crepes with salt and sweet stuffing, holodec (jelly meat) and grand bowl of buckwheat. Everything was there. Russian children are commonly taught to stay away from store-prepared food, so I left behind the refrigerator, grabbed a loaf of heavy dark bread, gazed for a moment on a row of refrigerators stuffed with packages of frozen pelmeni  (small meatballs in dough for boiling) and finally proceeded to check out with a full cart of products with English tags glued over the Russian originals.

If you have already been to Buford Highway Farmers Market to get some Chinese noodles, green tea or some exotic fruits and vegetables, stop by the Russian section next time and grab at least some sweet treats. Dozens of glass jars with something red and green floating inside are the best indicator for the Russian section. As for our family, we usually leave with a jar of preserved cucumbers for Olivier salad, a couple of Tula gingerbreads and a package of Belorussian Stolichnuye (Capital City) chocolate sweets, herring Matjes, a loaf of dark bread and some mayonnaise. The prices are not the best, but for the taste of mother country or an unforgettable (but hopefully positive) experience it worth paying a couple dollars more.

As we packed the stuff into the trunk, I couldn’t resist and grabbed one gingerbread. I delightfully savored it with American sparkling water and felt like home is not so that far; or did I leave at all?

* to read more about this dish, see Around the World on 80 Plates series, #2 Russia.

This is the sixth installment in the series, Around the World in 80 Plates.