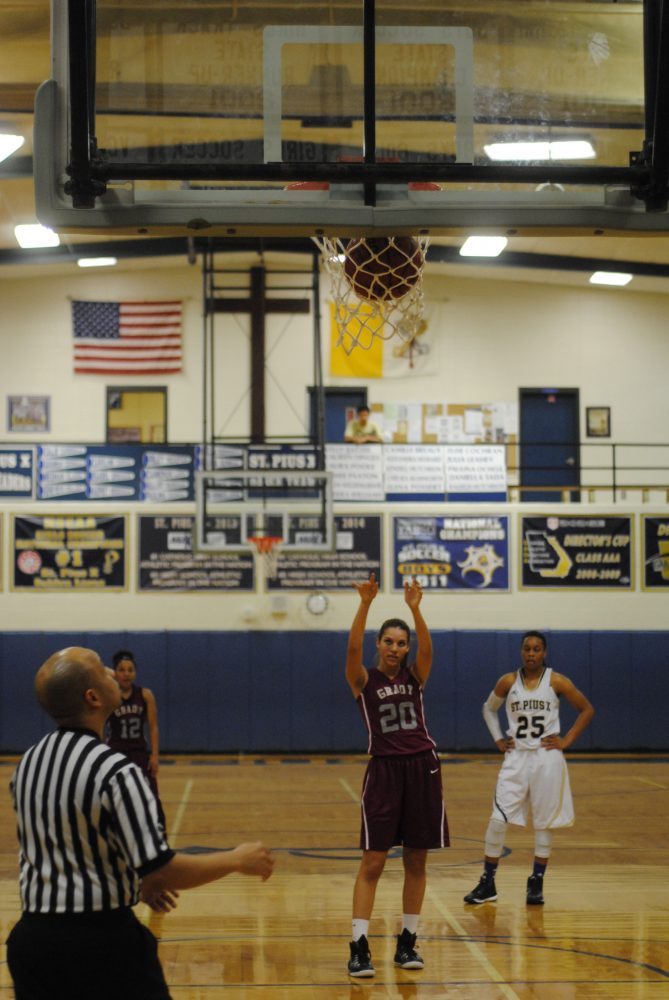 The visiting Grady girls basketball team fought the good fight against the host St. Pius X Golden Lions, although the score was close throughout the game, and tied at 53 at the end of regulation, the Knights couldn’t hold on, falling in overtime, 63-59.

Pius took the lead early in the first quarter, but senior Aliya Maloof made a three-pointer with 30 seconds remaining to bring Grady within three points at the end of the period.

Grady started strong in the second quarter, as senior power forward Jasmine Rich (pictured above) made two three-pointers in the first two and a half minutes to tie the score at 16. Maloof put up five consecutive points to put Grady ahead, but Pius followed up with five of their own to tie up the score. Shortly after, senior shooting guard Naria Woods blocked a St. Pius pass and ran the length of the court for an easy layup, bringing the score to 25-23. Grady couldn’t hold off Pius in the final 90 seconds, as the Lions scored the final five points of the half to lead 28-25.

The game remained tight midway through the third quarter, with Pius only up by two. After Maloof spun around a defender for a layup, Grady coach Harlen Graham called a timeout. With only four and a half minutes remaining in the period, Maloof and Rich fueled an eight point run, putting Grady up 41-37 at the end of the quarter.

Pius opened the fourth quarter with five unanswered points, but Woods made a free throw and drove through the lane to put Grady back up by two with about four minutes to go. After a Pius timeout, the Lions made a three-pointer which was quickly answered by a three from Woods. Two fouls called on Grady that led to four made free throws tied the score up at 49 with around two minutes left to go.

After attempting to drive down the lane for two, Woods hurt her leg and had to be carried off the court by her teammate Rich. Rich made two-point shot to tie the score at 51 with a minute to go, however, Maloof was called for a foul, and the Pius player made both free throws to put the Lions up by two. With 43 seconds remaining, Grady called a timeout and put Woods back into the game. With the clock running down, Woods made a jump shot to tie the game at 53 and send it to overtime.

Rather than the four eight-minute quarters, the overtime period lasts only four minutes. Grady kept the game tight, but got in foul trouble in the final minute and half. St. Pius proceeded to score five unanswered points off of free throws, giving the Lions a six point lead. With 40 seconds remaining in the game, Rich hit a three-pointer to pull Grady within three, but another Grady foul put the game out of reach.