Copying Our Grandparents or Fashion Tends To Come Back 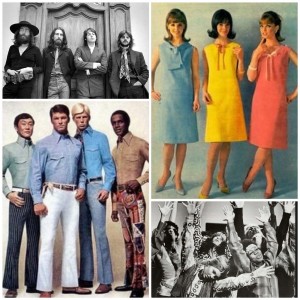 Crop tops with high-waisted pants, flower-patterned dress, distressed T-shirts and jeans, hat covering messy hair… Do you recognize these outfits? There are only several of teenagers’ favorite ways to dress at school. But have you ever thought about where these all trends came from? At first sight, these looks may seem fresh and original, but in reality today’s teens are wearing the same styles of pants and shirts that their  grandparents did.

Fashion returns as they say. Deeper research of the trends of the past decades prove this statement to be true.

The beginning of the past century was marked with two monstrous and violent wars in  the  whole history of humanity. These sorrowful events, however, did not impact fashion in a significant way. Up to the 1960s, therefore, ladies were still wearing dresses, while gentleman wore suits.

Then came the “hippie era” or “swinging ‘60s.” The phrases used to define these times reveal the significant social changes that were happening, a kind of energetic awakening from previous uninspired years. People expressed through their attire who they were: hippies, mods or rockers. These street styles and alternative fashion persist to the present day. Back then, people listened and danced to rock ‘n’ roll. Fashion was influenced and inspired by youth culture, rock music, space exploration and other new technologies.

The style at the befinning of the decade, however, was still classic and restrained. Students’ clothes of the first part of ’60s reflected conservative ideology, with girls wearing “touching-the-ground skirts” and strict restrictions on shorts and jeans at schools. By the end of the decade, however, all of these restrictions were relaxed. In the late ‘60s, students cheerfully donned psychedelic tie-dye shirts and bell bottom pants.

After 1965 women’s fashion was incorporated by short skirts, men proudly wore beards and long hair in addition to tunics and capes. The ‘60s revealed such talents as Yves Saint Laurent and Paco Rabanne, Gap, Benetton and Sonia Rykiel.

What were the 1970s like? The first pictures that come to mind are disco, pop, glam dances and punk rock. Indeed, the early 1970s fashion was a fun era.

The very beginning of the decade was symbolized by bright clothing made of polyester material, tight-fitting pants and platform shoes, surprisingly both for men and women. Chest hair, medallions, butterfly collars, even wider bell bottoms, skin-tight T-shirts, flower-patterned dresses, sideburns, tunics, culottes and robes were the most popular items in the early 1970s. While every woman had a cowl neck sweater, high cut boots and low cut pants in her closet, every man had a striped v-neck velour shirt. It was time for Kenzo in France, Calvin Klein in the U.S., Valentino, Armani and Versace in Italy to take center stage.

While the ‘70s were a fashion continuation of the ‘60s, the ‘80s were a fashion rejection of the ‘70s. All the trends of the early ‘80s completely reversed themselves later in the decade. Both men and women began to wear looser shirts and tight, close-fitting trousers. The 1980’s fashion had heavy emphasis on expensive dressing, fashion accessories and women’s makeup.  Later generations would and still do make fun of the big, curly, bouffant hairstyles of the 1980s. Music celebrities, among whom in 1980s were Madonna, Michael Jackson and Bob Marley, greatly reflected, but also impacted the fashion. One of the most significant phenomenons of the decade was the beginning of punk fashion as a reaction against both the past hippie movement and current materialist one.

The fashion of 1990s revived several trends from the earlier decades while also adding its own inventions.Personal expression dominated the fashion and the mindset of the decade. The new era of electronic communication and the Internet inspired and influenced fashion trends. Music industry celebrities also had a huge influence as evidenced by looks that clearly evoked the most popular genres of the decade: grunge , hip hop and rap. So while some followed grunge style others wore black goth clothing. One of the most recognizable items of 1990s fashion were mini-skirts women  used to wear.

Teenagers today have come back to the 1990s in the way they dress. The Internet is teeming with step-by-step guides for how today’s teenagers can look like they came directly from 1990s. A Southerner survey of 100 students confirmed the the popularity of ‘90s fashion sensibility.

More than 60 percent chose the 1990s fashion style over the styles of previous decades.

The survey also revealed that many Grady students feel that the fashion of their peers is out of style. One third of respondents gave Grady students five points out of 10 for their ability to dress well. While the school daily is full of original and colorful outfits, only 50 percent said they care what they wear to school every morning. One in five said that they would be in favor of a school uniform. Other results of the survey can be seen below.

On a scale from 1 to 10, how would you rank the ability of Grady students to dress both fashionably and appropriate?

I would give Grady an overall grade of a 9 on of its fashion sensibility. Many of the students push the envelope when it comes to being innovators with their chosen apparel. I took away a point because though creative, is inappropriate for the high school environment. I LOVE the personality that shows up within the trends.

Would you support the establishment of school uniform at Grady? If yes, would you like with your students team design it?

In conclusion, when it comes to fashion, individually we may dress different, but together our look is very Grady.