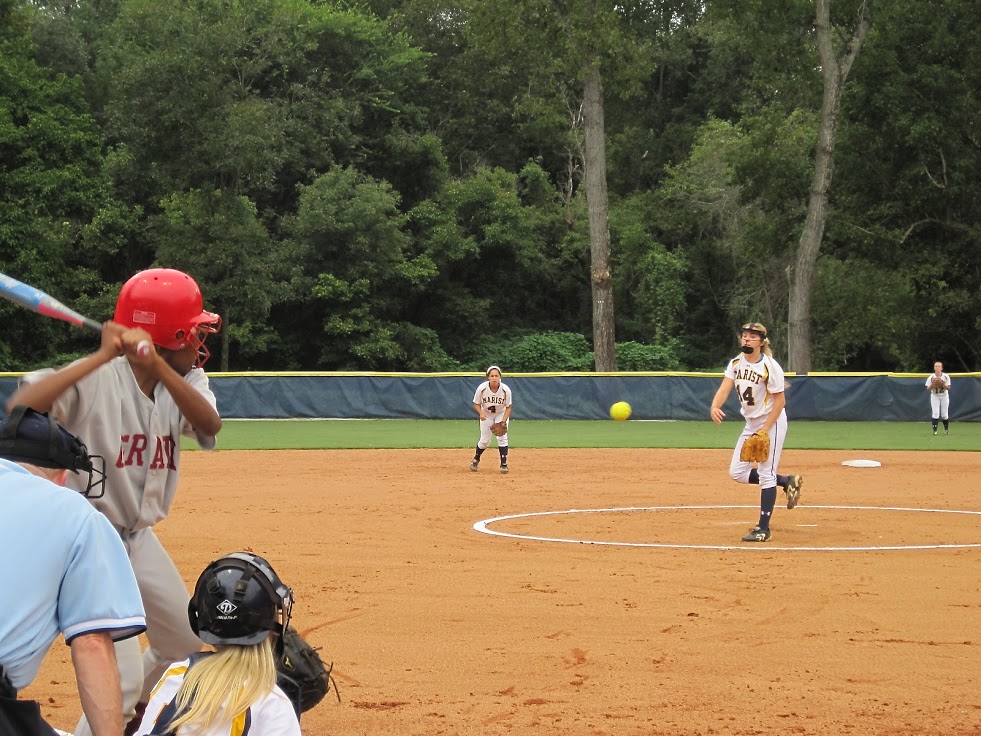 BY GRACIE GRIFFITH AND REILLY BLUM

The softball players are forced to practice in the sliver of grass wedged between the trailers and Charles Allen Drive. Even though the team occasionally practices at Crim High School, it’s usually relegated to a weedy, unmowed field.

Many members of the team cite the lack of practice space as a major factor affecting their performances in games.

“We have to practice on the grass, and that affects how people know where the ball [will bounce], because they haven’t seen bases before,” senior softball player Nadia Kendall said.

“If we had a field I promise we’d be much better,” Anicetce said.

The team’s coach, Patrick Thomas, has tried to organize practices at Crim, which is Grady’s official home field. Unfortunately, the team’s busy schedule makes it hard for him to schedule these off-campus training days. He hopes the team will return to the Crim facilities later in the season.

“When we have gotten to Crim, we’ve had pretty good practices,” Thomas said.

The softball team has a losing record as of Sept. 17. They suffered a tough loss to Marist High School on Sept. 15, allowing the War Eagles 15 runs, while scoring none.

“When scores like that come up, we’ve just gotta try to keep them in the game. I try to say ‘come on, come on, let’s go!’ You gotta keep them motivated,” Thomas said.

However, the team emerged victorious over Langston Hughes High School on Aug. 25, beating the Panthers 20-14.

Most of the team’s players have never played softball before, and Thomas believes progress is coming in baby steps.

“We’re trying to work on fundamentals, and then we can get better. [I’m teaching the team] how to catch, how to field ground balls, things like that,” he said.

“They’re willing to learn,” he said. “The young ones are catching hold of what softball is all about.”

Despite the team’s drive to improve, attendance at practice is usually not very high.  Thomas occasionally cancelles practices when more than half of the team are not present.

The team had to forfeit two games this season when too few players arrived ready to play.

Attendance aside, Thomas is dedicated to expanding participation in Grady’s softball program. He believes spreading awareness of the program is the next step. Thomas hopes to become more active in convincing students to tryout for the team next year.

This year, there wasn’t enough player interest for the softball team to hold official tryouts.

“Whoever showed up got in because there weren’t a lot of people who tried out,” Anicetce said.

The softball team also hopes for an increase in the number of Grady spectators at their games.

“No one really watches our games, there’s not a lot of support. Most of the time the other team has a lot more people and their bleachers are full,” Anicetce said.

Despite the odds against the Grady softball team, Thomas remains optimistic. “We’re young,” he said. “We have a lot of girls that have not played softball before but it’s a work in progress. Right now we’re struggling, but everybody’s getting better, especially the kids who’ve never played before.”