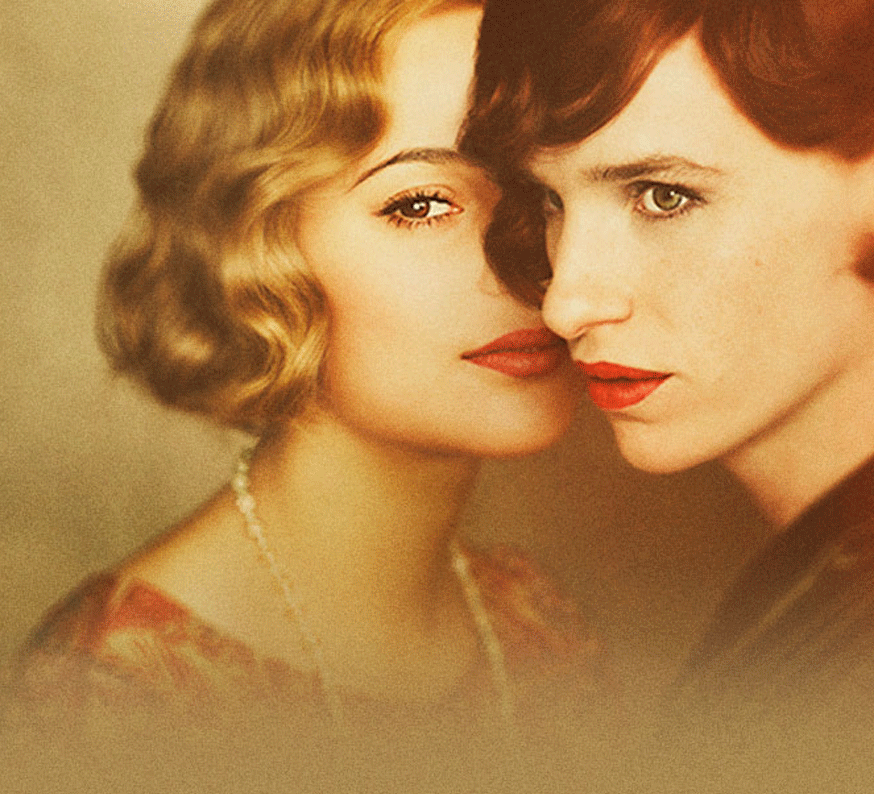 Let me paint a picture for you: It is a cloudy day in Copenhagen when Gerda Wegener, (Alicia Vikander), a portrait painter and the wife of a popular landscape painter Einar Wegener (Eddie Redmayne), looks at her husband for the very last time at the train platform as he boards. The depth in her eyes is full of fear and sadness, yet it is the most comforting expression that the audience witnesses in the entire film. Gerda is sending her husband off to war against himself, and to come back home as his lost identity, Lili Elbe: a Danish girl.
After Eddie Redmayne performed with an incredible capacity for reinvention in “The Theory of Everything,” a Stephen Hawking biopic, he sets off to portray one of history’s pioneers of gender-reassignment, Lili Elbe, née Einar Wegener in the Oscar-nominated film, “The Danish Girl”. For an actor, there are only a few more enticing and challenging roles than this, in which the nature of identity, performance and transformation are all wrapped up in the very fabric of the character, and Redmayne gives the greatest and most intimate performance of his career. Reuniting with “Les Miserables” director Tom Hooper in a return to the picturesque and scenic frames of the Oscar-winning “The King’s Speech,” Redmayne finds himself at the heart — one shared by Alicia Vikander — of what’s meant to be the year’s most talked-about artistic phenomenon.
Set in  the late 1920s, transexuality has taken decades to receive such a high-profile treatment. Though some might argue that “The Danish Girl’’  comes as too little too late, the film’s release could hardly be timelier in the wake of recent headlines — especially the legalization of gay marriage and Caitlyn Jenner’s high-profile gender transition. As it happens, “The Danish Girl” has been in the works since the publication of David Ebershoff’s novel 15 years ago. In order to penetrate the conversation of “polite” society, however, one must play by its rules, and “The Danish Girl” is nothing, if not sensitive to how old-fashioned viewers might respond, scrubbing the story of its pricklier details and upholding the long-standing LGBT-movie tradition of tragically killing off the “monster” in the end.
When “The Danish Girl” first introduces Redmayne’s character, he is dapperly costumed as a Danish gentleman, making eyes across a gallery opening at his wife, Gerda. Throughout the actor’s career, casting directors have always wrestled with Redmayne’s exceptionally specific look, which is not so much androgynous as a juxtaposition of pretty and off-putting features: those unblinking, long-lashed eyes; the sharp, knobby cleft of his nose and elegant malar bones set above pale, sucked-in cheeks. Our brains never quite know how to process Redmayne’s appearance, however, here Hooper takes full advantage of the situation as deliberate ambiguity.
“You helped bring Lili to life, but she was always there,” Einar would tell Gerda almost to reassure of the fear of her life partner’s long-awaited departure. Outsiders always want to know what makes LGBT people “that way,” seeking psychological answers to a situation with which they can’t identify, but “The Danish Girl” dutifully avoids any such amateur diagnosis. It is surely for the benefit of such skeptics that Lili explains, “God made me this way, but the doctor is curing me of the sickness that was my disguise.” Until recent times, the medical community’s response to such identity issues was to diagnose their “perverse” patients as schizophrenic or insane and to shock, drug or irradiate the sickness out of them. That chronic misunderstanding becomes a running thread in the film, which tends to be far more pleasant to watch when Lili is getting to be herself. She is understandably hesitant to emerge at first, though Einar (who hates public gatherings) agrees to accompany his wife dressed as Lili, his imaginary cousin from Vejle. The resulting scene may be the film’s best, a coming out as thrilling as Cinderella’s ball, in which Lili can feel the gaze of everyone in the room. This, he learns, is how beautiful women feel all the time in public, and if audiences take nothing else away from Hooper’s humanely empathetic film, this lone gender-swapping lesson in identification is victory enough.
Spotlighting one of the least-represented threads in the LGBT quilt, “The Danish Girl” clearly wants to untangle the trans experience from the blanket definition of homosexuality. What’s of utmost importance here is the discovery and ultimate acceptance of Lili’s true identity, and from the film’s perspective, the gender question has nothing (or very little) to do with sex. Rather, it’s something that reveals itself at first in mirrors and other reflective surfaces, and later directly to camera, as Redmayne explores Einar’s hidden second persona. But Lili’s emergence is a gradual and hesitant process, beautifully embodied by Redmayne — and reflected by Vikander, whose Gerda does her best to adapt alongside her husband, making this film truly nothing but a love story between the two.
Though Einar’s first attempt at makeup is rather uneasy, he becomes quite the pro, upstaging the other women whenever he goes out in public. At first, the goal is simply to pass — a game, almost — but in time, the butterfly motif becomes clear, reflected in the pic’s ripening color scheme. By the end, the goal is complete and total transformation as Einar studies the body language of the women around him and incorporates them into what for Redmayne is a character, but for Lili is her true self.