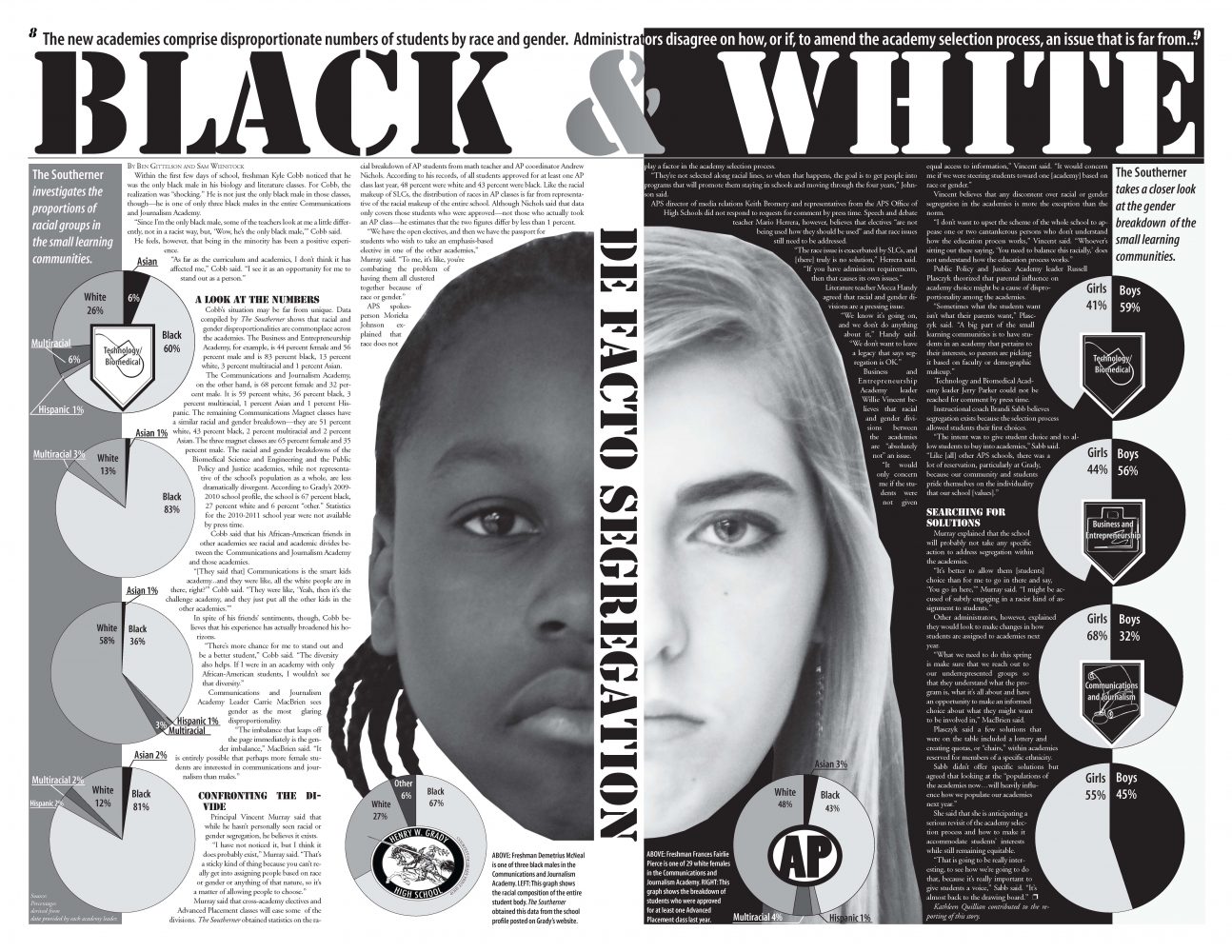 By Ben Gittelson and Sam Weinstock

He feels, however, that being in the minority has been a positive experience.

“As far as the curriculum and academics, I don’t think it has affected me,” Cobb said. “I see it as an opportunity for me to stand out as a person.”

A LOOK AT THE NUMBERS

Cobb’s situation may be far from unique. Data compiled by The Southerner shows that racial and gender disproportionalities are commonplace across the academies. The Business and Entrepreneurship Academy, for example, is 44 percent female and 56 percent male and is 83 percent black, 13 percent white, 3 percent multiracial and 1 percent Asian.

The Communications and Journalism Academy, on the other hand, is 68 percent female and 32 percent male. It is 59 percent white, 36 percent black, 3 percent multiracial, 1 percent Asian and 1 percent Hispanic. The remaining Communications Magnet classes have a similar racial and gender breakdown—they are 51 percent white, 43 percent black, 2 percent multiracial and 2 percent Asian. The three magnet classes are 65 percent female and 35 percent male. The racial and gender breakdowns of the Biomedical Science and Engineering and the Public Policy and Justice academies, while not representative of the school’s population as a whole, are less dramatically divergent. According to Grady’s 2009-2010 school profile, the school is 67 percent black, 27 percent white and 6 percent “other.” Statistics for the 2010-2011 school year were not available by press time.

Cobb said that his African-American friends in other academies see racial and academic divides between the  Communications and Journalism Academy and those academies.

“[They said that] Communications is the smart kids academy…and they were like, all the white people are in there, right?’” Cobb said. “They were like, ‘Yeah, then it’s the challenge academy, and they just put all the other kids in the other academies.’”

In spite of his friends’ sentiments, though, Cobb believes that his experience has actually broadened his horizons.

“There’s more chance for me to stand out and be a better student,” Cobb said. “The diversity also helps. If I were in an academy with only African-American students, I wouldn’t see that diversity.”

“The imbalance that leaps off the page immediately is the gender imbalance,” MacBrien said. “It is entirely possible that perhaps more female students are interested in communications and journalism than males.”

Principal Vincent Murray said that while he hasn’t personally seen racial or gender segregation, he believes it exists.

“I have not noticed it, but I think it does probably exist,” Murray said. “That’s a sticky kind of thing because you can’t really get into assigning people based on race or gender or anything of that nature, so it’s a matter of allowing people to choose.”

Murray said that cross-academy electives and Advanced Placement classes will ease some  of the divisions. The Southerner obtained statistics on the racial breakdown of AP students from math teacher and AP coordinator Andrew Nichols. According to his records, of all students approved for at least one AP class last year, 48 percent were white and 43 percent were black. Like the racial makeup of SLCs, the distribution of races in AP classes is far from representative of the racial makeup of the entire school. Although Nichols said that data only covers those students who were approved—not those who actually took an AP class—he estimates that the two figures differ by less than 1 percent.

“We have the open electives, and then we have the passport for students who wish to take an emphasis-based elective in one of the other academies,” Murray said. “To me, it’s like, you’re combating the problem of having them all clustered together because of race or gender.”

APS spokesperson Morieka Johnson explained that race does not play a factor in the academy selection process.

“They’re not selected along racial lines, so when that happens, the goal is to get people into programs that will promote them staying in schools and moving through the four years,” Johnson said.

APS director of media relations Keith Bromery and representatives from the APS Office of High Schools did not respond to requests for comment by press time. Speech and debate teacher Mario Herrera, however, believes that electives “are not being used how they should be used” and that race issues still need to be addressed.

“The race issue is exacerbated by SLCs, and [there] truly is no solution,” Herrera said. “If you have admissions requirements, then that causes its own issues.”

“We know it’s going on, and we don’t do anything about it,” Handy said. “We don’t want to leave a legacy that says segregation is OK.”

Business and Entrepreneurship Academy leader Willie Vincent believes that racial and gender divisions between the academies are “absolutely not” an issue.

“It would only concern me if the students were not given equal access to information,” Vincent said. “It would concern me if we were steering students toward one [academy] based on race or gender.”

Vincent believes that any discontent over racial or gender segregation in the academies is more the exception than the norm.

Public Policy and Justice Academy leader Russell Plasczyk theorized that parental influence on academy choice might be a cause of disproportionality among the academies.

“Sometimes what the students want isn’t what their parents want,” Plasczyk said. “A big part of the small learning communities is to have students in an academy that pertains to their interests, so parents are picking it based on faculty or demographic makeup.”

Technology and Biomedical Academy leader Jerry Parker could not be reached for comment by press time.

“The intent was to give student choice and to allow students to buy into academies,” Sabb said. “Like [all] other APS schools, there was a lot of reservation, particularly at Grady, because our community and students pride themselves on the individuality that our school [values].”

Murray explained that the school will probably not take any specific action to address segregation within the academies.

“It’s better to allow them [students] choice than for me to go in there and say, ‘You go in here,’” Murray said. “I might be accused of subtly engaging in a racist kind of assignment to students.”

Other administrators, however, explained they would look to make changes in how students are assigned to academies next year.

“What we need to do this spring is make sure that we reach out to our underrepresented groups so that they understand what the program is, what it’s all about and have an opportunity to make an informed choice about what they might want to be involved in,” MacBrien said.

Plasczyk said a few solutions that were on the table included a lottery and creating quotas, or “chairs,” within academies reserved for members of a specific ethnicity.

Sabb didn’t offer specific solutions but agreed that looking at the “populations of the academies now…will heavily influence how we populate our academies next year.”

She said that she is anticipating a serious revisit of the academy selection process and how to make it accommodate students’ interests while still remaining equitable.

“That is going to be really interesting, to see how we’re going to do that, because it’s really important to give students a voice,” Sabb said. “It’s almost back to the drawing board.”