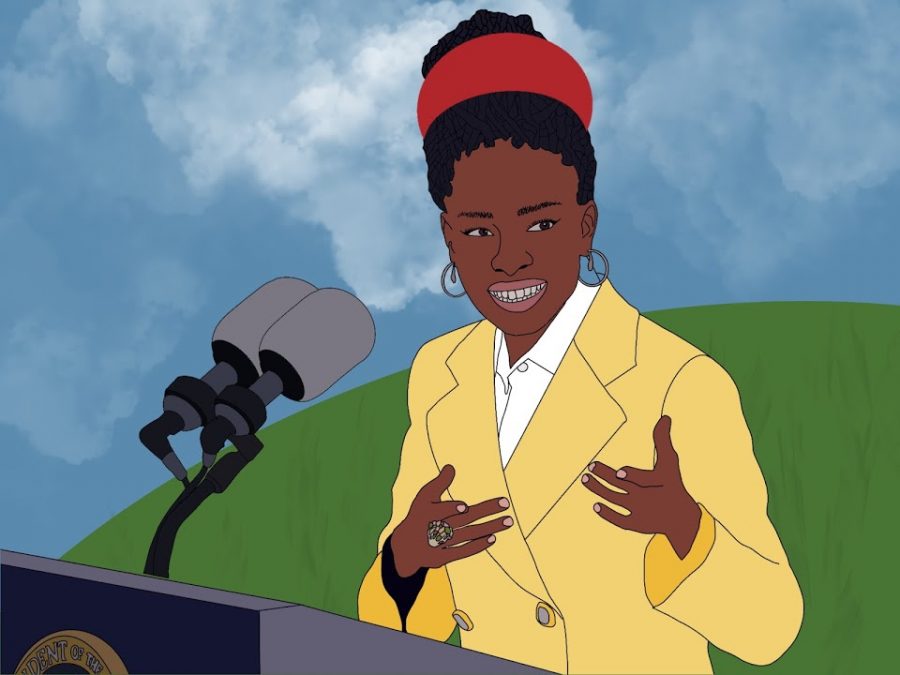 Gorman shared the inaugural stage with former presidents, members of Congress and many more influential leaders as she performed her poem "The Hill We Climb."

Amanda Gorman’s words are changing society.
Gorman, the first National Youth Poet Laureate and a recent Harvard graduate, took the world by storm after her performance at President Joseph Biden and Vice President Kamala Harris’s inauguration. She is an inspiration to many and represents the direction America should be moving in.
Though the inauguration was many Americans’ first look at Gorman, it doesn’t signal the start of her career. Gorman is no stranger to being recognized for her work. She received a Genius Grant from OZY Media, did a TED Talk with over 1.2 million views and has written for the New York Times newsletter.
Despite her apparent success, Gorman’s journey was not an easy one. She struggled with a speech impediment, something she shares with President Biden, but worked to overcome it throughout her career, leading to her flawless rendition of her poem “The Hill We Climb” and her other works.
While many were focused on Gorman’s words, her bright red headband and yellow coat did not go unnoticed by those around the country. Her bold sense of style seemed to flow with the poem she was reciting, and after the inauguration, Gorman signed a contract with IMG Models, providing yet another platform for her to inspire with. This contract also breaks down stereotypes for models and political figures.
Gorman later graced the cover of “The Black Renaissance,” a special TIME Magazine issue where she was interviewed by former First Lady Michelle Obama. She talked about her inspirations, preparing for the inauguration and advice for young black girls, among other things.
Gorman’s popularity has helped to skyrocket the sales of her two books that will be released in September by Penguin Random House. Her children’s book “Change Sings” and “The Hill We Climb” poetry book will each print one million initial copies. The books empower young girls and show that they have the power to create change.
Gorman’s latest accomplishment is her performance of her poem “Chorus of the Captains” at Superbowl LV on Feb. 7. She was the first poet to perform before the game and reached an audience of millions with her words. Her poem focused on the three honorary captains of the game: James Martin, a U.S. Marine Veteran, Trimaine Davis, an educator and Suzie Dorner, an ICU nurse manager.
Right before the coin toss, a prerecorded video played that featured Gorman reciting her poem. A stanza was dedicated to each of the captains, and as Gorman spoke about them, videos of Martin, Davis and Dorner were played.
“We celebrate them by acting with courage and compassion, by doing what is right and just. For while we honor them today, it is they who every day honor us,” Gorman said as she ended her poem.
Her words combined with the heroic acts of the people shown was breathtaking and brought attention to the struggles our country has gone through over the past year. Through the national sporting event, her words reached so many different audiences that may not have fully understood the strength it took to get our country through this crisis.
It’s important to acknowledge that the rise of this strong, powerful, confident black woman is in sharp contrast to what we saw with the Capitol attack on January 6th. Gorman’s rise to fame shows that hate will not win in the country.