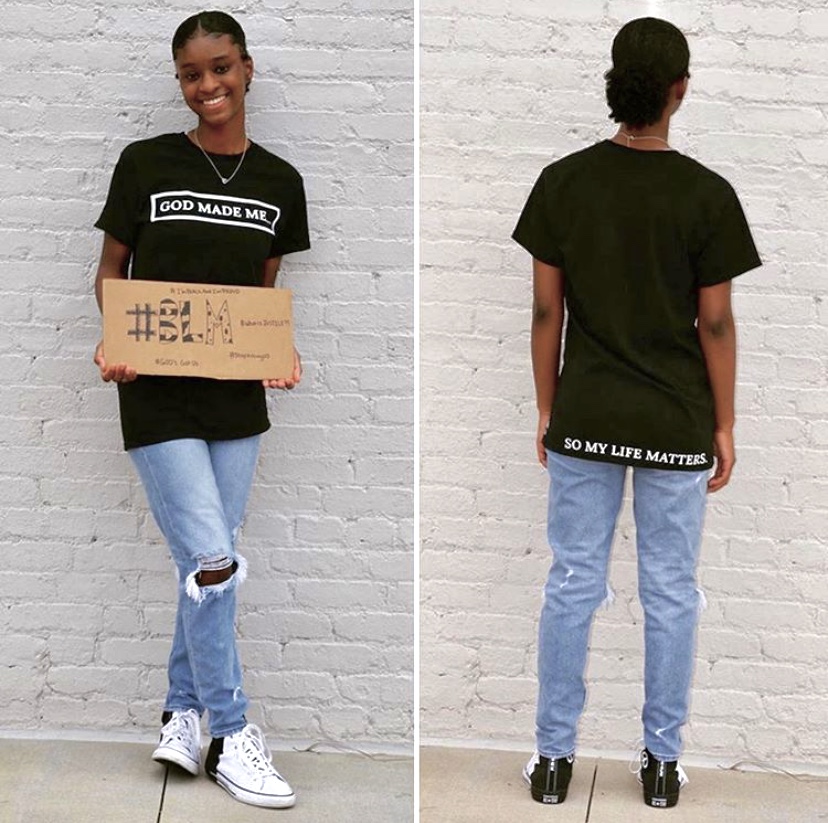 Swint poses with a Black Lives Matter sign to show her support. She shows the front and back design of one of her t-shirts.

Sophomore Kennedy Swint launched her clothing line God Made Me in an effort to raise awareness for police brutality and racial inequality. Though Swift is juggling school and running a business, she is driven by faith.
Swint attended protests in late May in Atlanta with her family after the deaths of Ahmuad Arbery, Breonna Taylor and George Floyd, events that highlighted police brutality. Having seen how these deaths brought pain to a lot of people, she felt inspired to contribute.
“While police brutality, racial inequality and protests were going on, I really felt motivated and wanted to use my voice,” Swint said.
Swint believes in herself and said she will keep persevering until she gets where she wants to be.
“I was confident that people would take me seriously,” Swint said. “I kept my trust and my faith in myself, most importantly.”
She hopes to influence those who feel like they don’t belong, or have been treated differently based on the color of their skin or their beliefs.
“I want to send the message that no matter how difficult life may be or how people may treat you, due to your race, ethnicity, gender, sexuality or religion, God made you and will always be on your side,” Swint said.


Swint seems to impact those around her, and doesn’t appreciate when others are treated poorly, even by her friends. Sophomore Summer Matthews has noticed of her passion.
“I met Kennedy my first year at Grady, and she has always been caring of other people and their feelings, no matter how they looked, or where they were from,” Matthews said. “If she saw her friends treating someone else badly or laughing at someone being treated badly, she would tell us to stop. She will speak up for anyone, even when she doesn’t know them.”
Despite her age, Swint has sold to a diverse customer base. She has sold an estimated 70 to 80 T-shirts so far. Customers  seem to like her brand and what it stands for.
“I purchased two shirts from God Made Me, one for me and my daughter,” customer Angelina Anderson said. “I love the fact that the printed quote came with no controversy, unlike the Black Lives Matter T-shirts, where people are harmed for wearing it in public. The quality of her shirts, I also loved because the material isn’t thin.”
Swint plans to switch things up and feature some new designs in the future. She has already launched new black tees with yellow, blue and neon. She also launched her new white tees with red, neon, black and blue. For cooler weather, Swint has God Made Me sweatshirts. Possible future designs will include face masks, hats, as well as hoodies. She focuses on capturing customers’ attention.
“I believe that consistently posting on social media platforms will capture a customer’s attention, as well as new designs of products,” Swint said.
For Swint, the COVID-19 pandemic hasn’t had much of an impact on shipping and sales. However, Postmaster General Louis Dejoy’s service cutbacks seem to have taken a toll on packages being shipped efficiently.
“This year things are a little different as far as the U.S. Postal Service,” Swint said. “The postmaster general closing post offices can make shipping take longer than expected sometimes.”
Since school started and Swint doesn’t have as much time to prepare packages, she has developed a steady routine to balance her business and school.
“I always check for orders after completing my work or at the end of virtual school,” Swint said.
Swint hopes to encourage other teens to pursue their dreams, whether it’s starting their own businesses or just reaching a goal. Most importantly, she wants others to remember to have faith and trust, even when things seem impossible.
“Advice I would give to people my age that want to start a business would be to believe in themselves, and not worry about what others think,” Swint said. “Strive to reach your goals and don’t give up.”
Delete Image
Align Left
Align Center
Align Right
Align Left
Align Center
Delete Heading