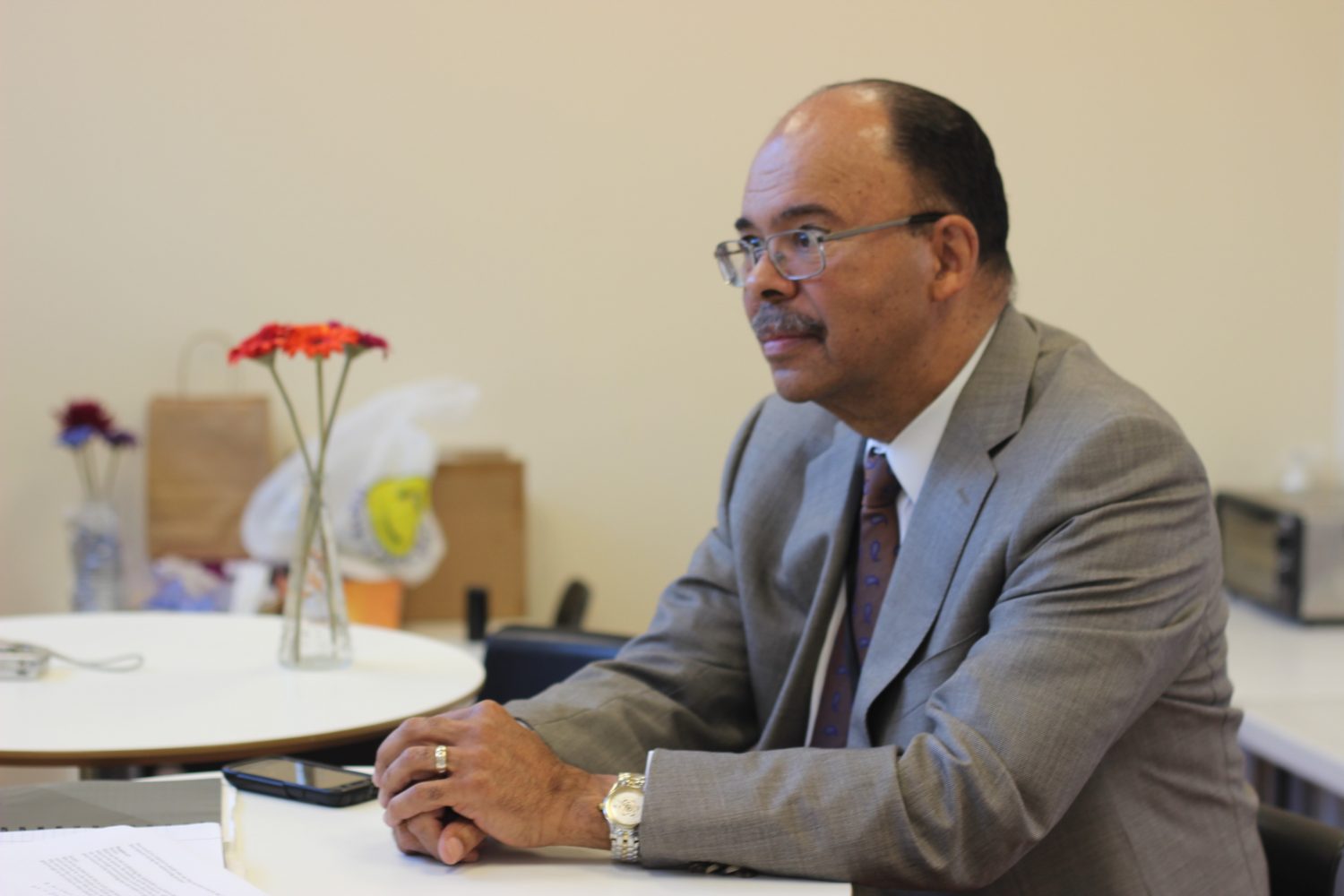 On Friday, Oct. 5, North Atlanta got an unexpected facelift.

Two APS officials, accompanied by security personnel, removed interim principal Mark MyGrant from North Atlanta and abruptly reassigned the high school’s entire leadership team. MyGrant, asked to return from retirement on an interim basis when a new principal could not be found over the summer, was just weeks from his planned retirement at the end of October.

Four administrators were reassigned to other schools, while MyGrant and one additional administrator were forced into retirement.

North Atlanta teachers were assembled in the theater and introduced to a new interim administrative team chosen by interim superintendent Erroll Davis while the principal and administration were informed that they had to leave immediately.

In an interview with The Southerner, Davis said he made the administrative switch to aid the new principal and MyGrant’s replacement, Howard Taylor. Sid Baker filled in as principal from Oct. 5 until Taylor arrived at the school on Monday, Oct. 29.

“I decided it would be best for [Taylor] to choose his own team and hit the ground running without taking a year or so to evaluate the existing team,” Davis said.

Nancy Meister, North Atlanta’s representative on the APS Board of Education, said Superintendent Davis offered her several conflicting reasons for the administrative changes.

“I was first led to believe changes were necessary so that the new principal could hire his own team and be accountable for his team,” Meister said. “I then learned it was around personnel hiring processes within the school, and finally I was told that the school was a failing school that if nothing changed would have been taken over by the state.”

Meister was not convinced by any of the reasons Davis offered.

Not only does Meister not support Davis’s decision, but she said she was not consulted by Davis before the changes were implemented.

“I had absolutely no idea that these changes were being considered,” Meister said. “I received a voicemail from Mr. Davis at 2:48 [on Oct. 5]. He said he was calling to touch base with me as the district representative about steps he had taken that afternoon at NAHS.”

In response to the overwhelmingly negative community response, Davis held a community meeting on Tuesday, Oct. 9 at 6 p.m. Before the meeting, there was an organized protest at 5 p.m.

Robin Washington, parent of a senior at North Atlanta and eighth-grader who will be there next year, attended the meeting.

“The explanation that they gave was that because of the potential that North Atlanta had, [and] because of the amount of parental involvement and the community that it’s in, it is underperforming in graduation rates, [and] it had been at risk of being taken over by the state because of the performance against the [Adequate Yearly Progress] standards, which actually are not even being used anymore,” Washington said.

Davis’s claim that North Atlanta would be “seized” by the state due to failure to meet AYP standards has been refuted by Georgia Department of Education officials.

Although Davis admitted Georgia had obtained a waiver from AYP and wasn’t held to its standards, he has defended his use of the word “seized.”

“I never said it would be run by the state, and you can go back and play the tapes,” Davis said.

Davis said the confusion regarding his statement could be due to differing definitions of the word “seized.”

“If your definition of seized is that [state officials] come in and take over the school and run the school, that is different from mine,” Davis said. “Mine is that if all of a sudden I’m a state-directed school, if I lose managerial flexibility, if I have a monitor assigned to my school that participates in my managerial decisions, and if I lose control and flexibility, I feel as if I’ve been seized.”

Recently, North Atlanta has been investigated by APS’s Office of Internal Compliance for anonymous tips alleging improper grade-changing. Davis said that he was not aware of these allegations when he made his decision to uproot the administration and that they had no impact on his decision.

Rumors have circulated that allegations of racism contributed to Davis’ decision to reassign the administrators.

An anonymous letter dated Feb. 6 uncovered by the Buckhead Reporter accused the school’s International Baccalaureate of institutional racism. It also alleged that black students were given lower grades than whites for work of the same qualiy.

“There was a charge of racism leveled against, I believe, the principal and several teachers or associates of the principal,” Davis said.

Since the accusation of racism was unsigned, Davis said an investigation was not launched. Even so, MyGrant was notified.

“Most principals say ‘Fine, thank you,’” Davis said. “Most do not decide to mount a public defense against an unsigned allegation, and deliver us a packet of material when we never made the allegation in the first place.”

MyGrant hired attorney Glenn Delk, and on Oct. 31, Delk sent a request to APS for a public hearing in an attempt to clear MyGrant’s name from charges of racism.

Davis said allegations of racism “absolutely [did] not” have anything to do with his decision.

Claims of racism did cause Amy Durham, a longtime North Atlanta College and Career Counseling Center volunteer and first-year teacher, to resign on Oct. 12. With her contract not approved because of the racism allegations, Durham felt that she could be fired at any moment.

Durham was anonymously accused of racism because she did not throw a party for an African-American male accepted to Harvard, said Maggie Neel, a junior in the International Baccalaureate program at North Atlanta. Neel finds the claims of racism against Durham ridiculous.

“First of all, this boy was one of her son’s best friends and in no way was she being racist,” Neel said. “She didn’t throw a party for the white girl who got into Harvard either because it’s against school policy.”

“This situation … could have been handled differently and achieved the same outcome without disrupting students, teachers, administrators and communities,” Meister said.

Students immediately protested the sudden reassignments. Emma Peterson, a North Atlanta junior who finds the leadership change “extremely disrespectful,” said as soon as the word was out, students used social media to spread the news.

“After that it was like a snowball effect,” Peterson said. “The more students that learned about the transition, the more the anger grew.”

Peterson is especially concerned that without Global Broadcast and Journalism academy leader, Laura Brazil, her academy’s growth will halt.

“We had a very slow development, but this year we really hit the ground running with new programs such as our news show, newspaper and more journalism classes,” Peterson said. “My academy leader Ms. Brazil was responsible for all of this and now that she is gone, I am worried that our academy won’t continue to progress as it has, or worse [we] will lose the funding that we gained.”

North Atlanta parent Robin Washington thinks the biggest problem with the administrative reassignments was the way the students were treated.

“There was a lack of respect for the students in this situation to toss their word out when these statistics existed in the summer and this could’ve happened before school started or after the new principal arrived,” Washington said.

Meister said North Atlanta teachers she has seen are “devastated and want answers.” Teachers who were contacted, though, chose not to comment because of concerns about job safety.

Davis said no teacher could be punished for speaking out, as long as they did not cross the line into insubordination and did not speak on inappropriate forums. Davis did not give specifics on what constituted insubordination.

On  Oct. 9, at noon, the football field became cluttered with hundreds of protesting students who had left their third-period classes, North Atlanta junior Adelaide Henderson said.

“We, as a school, wanted to show that we would not let this break us,” Henderson said.

Henderson was concerned the message of the walkout would be lost if students behaved rambunctionsly, “kicking trashcans over, talking to friends, hopping fences, and running wild.” She and others organized the students to sit down as a group.

“[We] talked to everyone and got them to make signs, have a moment of silence and show respect,” Henderson said. “I was very proud of us.”

Henderson wore a white T-shirt on which she had written “APS Customer Satisfaction 0%.”

The new administrators understood the students’ frustration and allowed the protest, as long as they didn’t leave campus.

“After an hour, the students moved back inside,” Peterson said. “To my knowledge no one has been punished. Most teachers didn’t make a big deal out of it either.”

Davis was not surprised by the uproar in the North Atlanta community, although he said the situation is not as unique as the community believes.

“Quite frankly moving out an entire administrative team is not that unusual,” Davis said. “We’ve done it several times this year, but in less vocal communities.”