It’s not easy being green: recyclables being trashed? 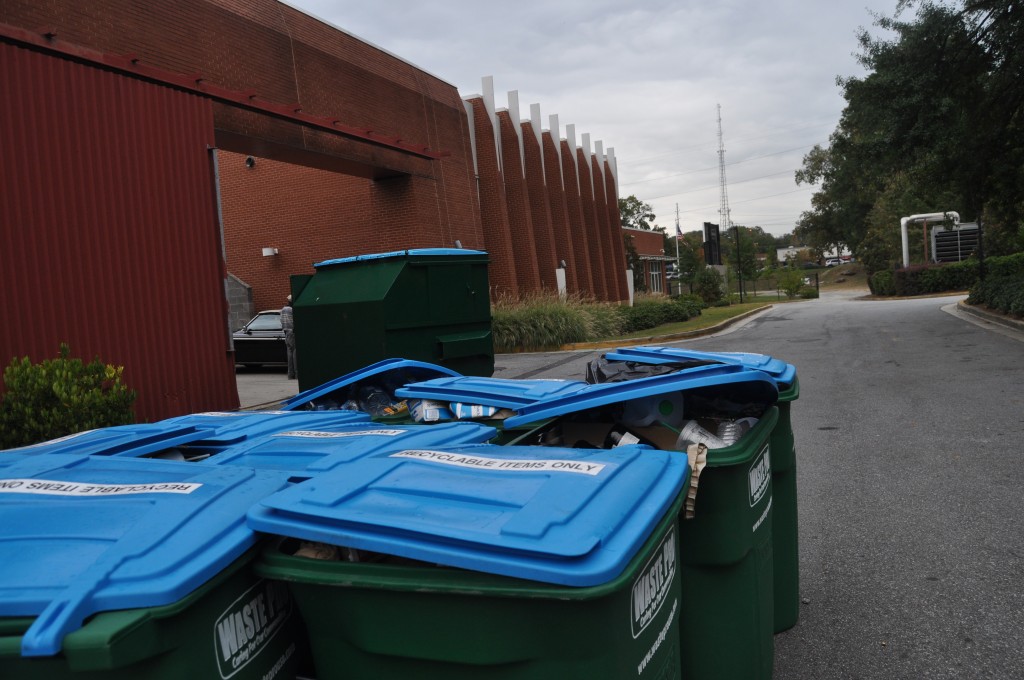 Biology and forensics teacher Anquinette Jones rarely stays at school late into the evening. But one day near the end of August, Jones was in her classroom at night, and she saw that the evening custodial staff had emptied her classroom recycling bin into the larger trash receptacle in the hall.

“I said, ‘Maybe that is a recycle trash can, where they’re dumping all the recycling stuff into one trash can,’” Jones said.

Jones stayed late the next night to test her suspicion, and saw her recycling bin and trash can emptied into one receptacle.

“I was here after school one day preparing for the next day,” Kaletsky said. “And the janitorial staff came in, and I saw them empty my trash can into a large trash can, and then they emptied my recycling bin into the same trash can.”

Ellis said recycling bins near the dumpster on Eighth Street have been sitting there since the second week of school. She is worried the waste in the recycling bins is not being recycled.

“My concern is just the environmental impact that it’s having,” Ellis said. “There’s so much stuff leaving this school that could be diverted from the landfill, and I just think it’s a shame.”

Philip Scardina, Grady’s operations manager, said his job is to pick up in the morning what the evening custodial staff did not get and report whether they did their work. Scardina said he does not know the protocol for the recycling program, as APS has recently implemented a new program.

Yvonne Douglas, the project manager for energy and environmental services for APS, said the system began contracting a company called Waste Pro, the largest recycler in Georgia, this past July to handle the school system’s recycling. She said schools had their own programs before that.

Ellis said Grady’s recycling program, which she established 10 years ago, was student-run and relied on the services of a recycling company called Go Green Recycling. The students were responsible for taking the bins outside and bringing them back in after Go Green picked up the recycling.

She said she was initially happy when she got an email from Douglas in July of this year saying APS was implementing a new recycling program at all of its schools.

“I told Go Green that we didn’t need their services anymore and was actually happy that the custodians were going to take it over because sometimes we get behind in recycling with just the students and myself running it,” Ellis said.

But Ellis said she is not happy with the program now because  she thinks that recyclables are not actually being recycled. Ellis thinks the issue with Grady’s recycling program is not with Waste Pro, but with the evening custodial staff, who she says are not following protocol. Ellis said she has contacted Douglas and called the manager of the evening custodians, but to no avail.

An evening custodial staff member who wished to remain anonymous said the evening staff does not manage recycling. He said they leave the bins for daytime custodial staff to handle.

Douglas said, to her knowledge, a school has never failed to put their recyclables outside for Waste Pro to pick up.

“I have tonnage reports for all schools, and every school has had recycling,” Douglas said.

Even so, Grady’s new recycling program has only existed for four months, and whether or not it is flawed is still uncertain. Until Jones is convinced her recyclables are in fact being recycled, she will keep her empty bottles.

“I try to drink three bottles of water a day, so at the end of the week, that’s quite a lot of bottles to be going in the trash can,” Jones said. “And I just started keeping certain things myself because I know whatever goes in the recycling bin is being thrown in the trash.”