Chipper’s exit (no rush, Larry) marks the end of a generation 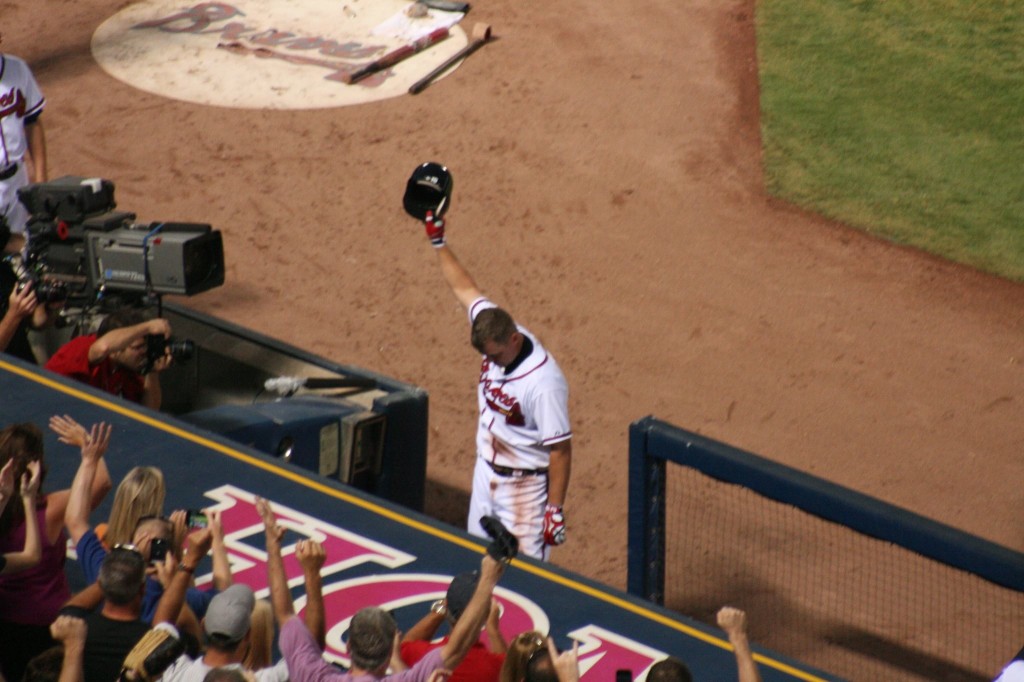 If they decided to redo Stone Mountain as a Mount Rushmore of Atlanta athletes, Chipper Jones would be one of the four athletes carved into the mountain. Heck, he might even be the No. 1 guy, the Abe Lincoln of Atlanta athletics. Like Abe, Chipper passes the first name test. He is among the few Atlanta athletes who do: Dominique, Deion and Murph (if a nickname based on a last name counts).  Unlike Chipper, though, these other first-name Atlantans wore the uniforms of other cities (so did last-namers Glavine, Maddux, Smoltz and Cox).

I’ve been thinking about Chipper Jones a lot lately because I’ve been wondering why his farewell season matters so much to everyone in Atlanta and everyone in America, me included.

You could argue that it’s because Chipper Jones is the greatest athlete in Atlanta history. You’d get no argument from me that he fits that description. There may not be an Atlanta athlete who can match Chipper’s list of individual accomplishments and team successes.

He’s been all All-Star eight times and a Silver Slugger twice. He’s been a batting champion, an MVP and a World Series champion on the only Atlanta professional team to end a playoff run with a victory.

These accomplishments make him an easy first-ballot Hall of Fame inductee to be sure, but as he nears the end of his farewell season, his 19th as a Brave, I can’t help but think there’s something far more important about Chipper’s retirement than a mere collection of impressive statistics.  Baseball fans fixate on numbers more than fans from any other sport (fantasy football fans don’t count because they don’t root for teams; they root for numbers).

The ever loquacious Jones has said recently that all the fuss is mainly because he’s just a Southern boy playing for a Southern city and that his aw-shucks candor and love of hunting and fishing make him popular throughout the South. He may have a point there, but I don’t hunt, and I can’t fish for five minutes without wishing I were somewhere else (unless of course there is a Braves game on the radio in the boat).

Chipper is the last link to the Atlanta Braves dynasty of the 1990s. He’s outlasted his manager, his general manager, his pitching rotation and every position player who was young when the Braves’ run began.  (The other longtime Brave named Jones — Andruw Jones — is a damn Yankee for Pete’s sake. How did we let that happen?)

No, Chipper Jones wasn’t on the Braves in 1991 when they went worst to first and an unprecedented run of excellence began, but he was Next in 1991. The Braves drafted him as the No. 1 overall pick in 1990 because their first choice, a Texas phenom pitcher named Todd van Poppel, said he’d never play for the Braves, so the Braves selected Jones with the first pick instead.  Over an undistinguished playing career, Van Poppel went from being the top baseball professional prospect in the world to being a historical footnote, a journeyman pitcher who won 40 games playing for eight different teams.

At the time I thought Van Poppel was evil because I was a sports writer at the University of Texas, and he told me directly he was destined to play for the Longhorns. This one guy rejected the Braves and the Longhorns, my hometown team and my alma mater.  But looking back I realize that I should have thanked Van Poppel instead of resenting him. His spurning the Braves was a bad career move for him.  It was divine intervention for the Braves and their fans.

Van Poppel’s rejection made Jones a Brave. And, as the cliché goes, the rest is history.

The year I got married and switched my address from Long Beach, Calif., to Atlanta, Chipper Jones got married and switched his position from shortstop to third base.  (OK, so Chipper Jones is much better at hitting a fastball than he is at marriage; I’m much better at marriage – knock on a wooden bat – than I am at hitting a fastball).

The year my wife and I settled into our first home in Atlanta, Jones settled into the starting lineup, and the Braves were World Champions.

The year my son was born in Atlanta, I switched schools and came to Grady High School.  Chipper Jones switched positions again and came to left field so that Vinny Castillo could hit lots of home runs in Atlanta.

The year my daughter was born in Atlanta, the Braves won their 14th straight division title, the last in their streak, and Chipper Jones returned to third base.

I can connect the most important moments in my life in Atlanta to Braves baseball.  We “celebrated” my wife’s birthday by attending the Braves playoff-exiting loss to the Giants, Bobby Cox’s last game.  My son turned 10 this April and where did we go to celebrate? Turner Field. My daughter brandished a sign that had a picture of Jones’ No. 10 jersey that said, “Hey Chipper, my brother is 10 today.” We were at the stadium on the night they gave out Chipper Jones bobble-head dolls, and he hit two home runs.

My Atlanta life is filled with Braves moments where I can tell you where I was when they happened, and I have spent this baseball season – Chipper’s last season – trying to squeeze a few more of them into my Braves experience.  Chipper seems to be looking at the season the same way, what with two walk-off homers against the dreaded Phillies, among the moments to savor from the season.

Jones and his team seem destined for an extended season, probably via the new system that will send two wild-card teams into the postseason for a one-game single-elimination playoff game.  That game will be the first game that could be Chipper’s last.  I think the postseason is going to be exciting but also stressful beyond belief because I’m not ready for an Atlanta Braves team that’s 100 percent new millennium.  Chipper may be ready for that, but I’m not, and I’m pretty sure I’m in the majority in this city.

So come October I’ll be rooting for the Braves to extend their season and beat back the clock at the same time.

CORRECTION: An earlier version of this story incorrectly stated that Chipper Jones won the 1995 Rookie of the Year Award. In fact, Jones finished second to Los Angeles Dodger pitcher Hideo Nomo for that honor.