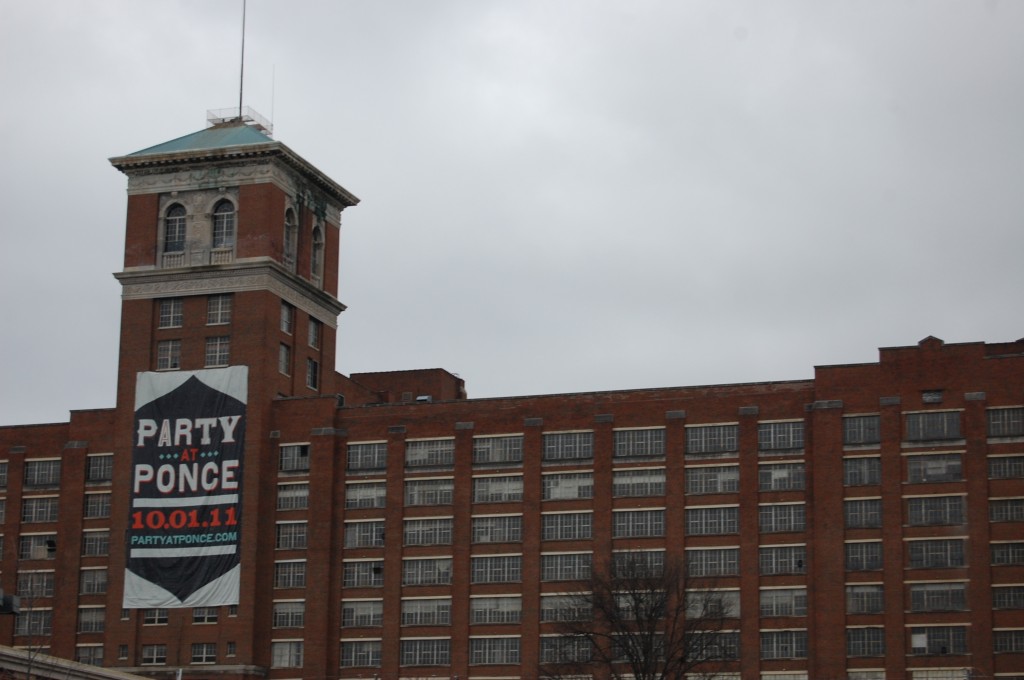 In the spring of 2014, a center for commerce, retail and housing will emerge out of the old City Hall East building, located on Ponce de Leon Avenue just a few blocks from Grady.

Jamestown Properties and Green Street Properties are spearheading the transformation of this Sears building-turned City Hall and transitioning it into a mixed use business and residential complex.

In the early 1900s, before the building was constructed as a Sears Roebuck store.  the Ponce de Leon Amusement Park covered the ground. Currently, the site houses an antique building with dozens of broken windows. The huge brick structure is full of large, vacated levels with original hardwood floors and equipment. Above each old workstation, a label on fading paper bears the handwritten names of the Sears employee who once worked there. To the right hangs the employee’s weekly work schedule.

The view from inside the building stretches from downtown to Virginia Highland. Back in the late 1920s and early 1930s, the building overlooked Ponce de Leon Park, the old baseball field that was home to the Atlanta Crackers and the Atlanta Black Crackers.

The current building’s condition now is a stark comparison to its busy days as a Sears Roebuck Store. Opened in 1926, the building carried everything from fishing gear to kitchen appliances. The store was nine stories of Sears merchandise, complete with what is now the train track running inside the store to deliver all of the goods.

In 1991, the city of Atlanta bought the building from the Sears Roebuck Company to use as an office building. After nine years, the City sold it to Jamestown Properties, a real estate investment and management company, for $27 million. Jamestown Properties partnered with Green Street Properties to create Ponce City Market.

“Right now that building is a blockade to Old Fourth Ward,” she said. “[It is an] unsafe space that prevents physical activities. Right now there is no incentive for people to walk on the street.”

Parker expects that to change. The building is being restored, and the train track underneath the structure is also in the process of being restored as part of the BeltLine project.

The BeltLine was first built on the backside of the original section of the building, but when the building expanded in 1929, the 1940s and the 1960s, the tracks were new expansions covered the tracks.

Sophomore Eli Mansbach attended the Party at Ponce, a benefit to gain public attention for the renovation project, on Oct. 1 and was pleased with the potential of the building.

“[It] seems like something to benefit the economy of Atlanta,” Mansbach said.

He was enthused about the project and said the collection and collaboration of all the different organizations coming together for the project will do great things for the community.

John Jameson, an Atlanta Downtown Authority associate who works with the BeltLine district, said the development should attract young families and single-family households. It will feature apartments, condominiums, restaurants, retail and office space. There will be an event hall and a restaurant on the lower levels, as well as a retail area with specialized food markets.

The office and residential spaces will be on the higher floors, and each level will contain a parking lot. With the new parking lots on each level, the old lot on the North Avenue side of the building will no longer be needed and  will be knocked down, Jameson said.

Jameson expects the BeltLine to open along the same time frame as the Market, which will bring more modes of transportation to the building and the whole Atlanta area.

All of this construction will not damage the building’s historical presence, Parker said.

The building is currently the largest building in the Southeast, and even after the renovation, it will keep its title.

Instead of losing its antique feel, Parker said that this huge addition and renovation will actually bring parts of the building closer to its original design than before the city took over.