the Southerner Online • May 20, 2014 • https://thesoutherneronline.com/29647/sports/track-star-beats-rain-to-defend-state-shot-put-title/ 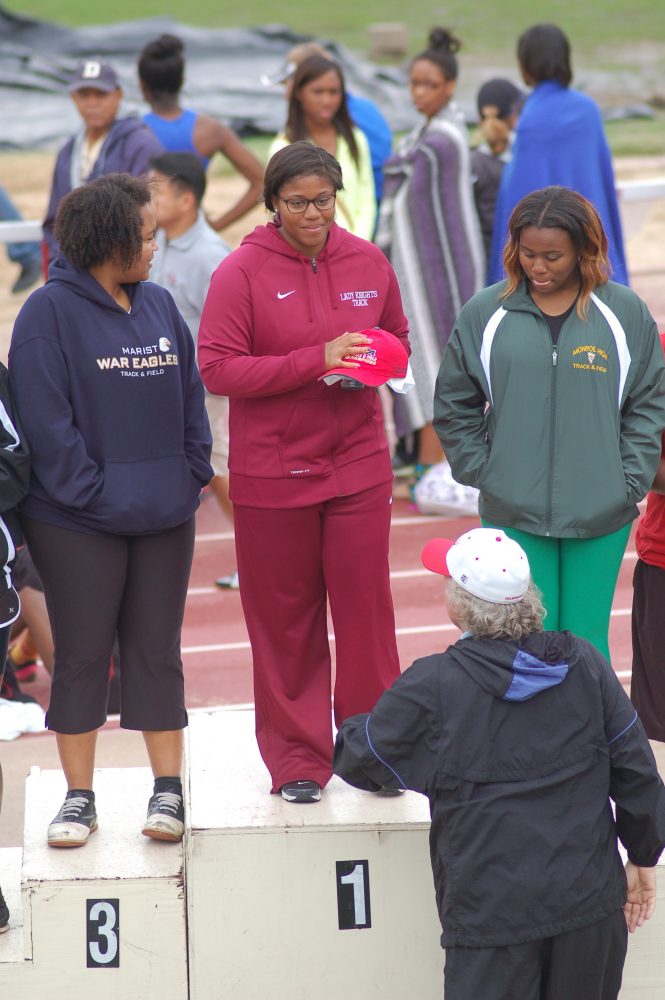 Woods stands atop the podium waiting to receive her second consecutive first-place award for the shot put competition in the state of Georgia.

Senior track-and-field team member Nyla Woods defended her state title in the shot put at the state competition in Albany, Ga. on May 1. Additionally, she finished fifth in the state in discus, and Grady took home 11th place despite having only two competitors.

Grady’s region consists of nine teams, but at state they were matched up against many of the best teams and athletes in the state.

Woods believes the weather hindered her ability to throw her best.

The conditions were bad as it continued to rain off and on, but the competitors threw anyway. Although the rain stopped her from setting a personal record, Woods was still good enough to throw one foot farther than the second-place finisher.

“If it was my call I would’ve postponed the meet, that’s how bad the conditions were,” Grady track coach Jacqueline Hughey said. “I was hoping that the weather wouldn’t mess her up. Even with the discus [result] I wasn’t disappointed because of the weather conditions.”

Woods agrees that the meet was handled  very poorly and that it should’ve been postponed, as it was dangerous for those who were competing.

“The pit for shot put was literally a mud puddle,” Woods said. “One girl who was throwing really well fell and busted her knee while she was warming up.”

Even though Woods didn’t throw as far as she is capable of, she was still satisfied with the result. She wished discus had gone a bit better, but wasn’t concerned with it because it’s not her main event.

Coach Hughey is in her sixth year as Grady’s track coach and she considers Woods one of the best athletes she’s worked with.

“She’ll be an Olympian no doubt,” Hughey said. “She’s that dedicated; she’s top of the line. I love the fact that I can say as a female athlete that she’s better than some of the male athletes. She practices for hours just to improve her skill. As far as a high school athlete, the best I’ve known in my life.”

While she didn’t finish first, Woods’ teammate senior Dionna Riley’s eighth-place finish in 300-meter hurdles was special for a different reason. Riley was one of the best athletes in the state but was sidelined almost the entire year with a knee injury.

“In 10th grade she was fifth in 300 hurdles after only five meets,” Hughey said. “She was qualified for five events in sectionals last year, but she jumped in the long jump pit and tore her meniscus laterally and bilaterally. She had knee surgery on May 28. and the doctor said she only had a 50/50 chance of being able to compete again. We had her in the pool in August, and she continued to do exercises to improve her knee. She was in a leg brace until September, and we took her crutches away in October. Her sprinting didn’t come until January, and we couldn’t get her back to hurdles until February.”

Even though Riley was able to compete this year, it was rough for her. Other parts of her leg were bothering her because her knee wasn’t as strong as it should’ve been.

“This season sucked,” Riley said. “I had to stop practicing sometimes because my leg hurt so much. I’ve visited the doctor six times and I’m still doing physical therapy.”

While the season was a struggle for Riley, she says that she loves the sport and was appreciative of the opportunity to compete.