Hinton wraps up Tortillas style burritos with a personal twist 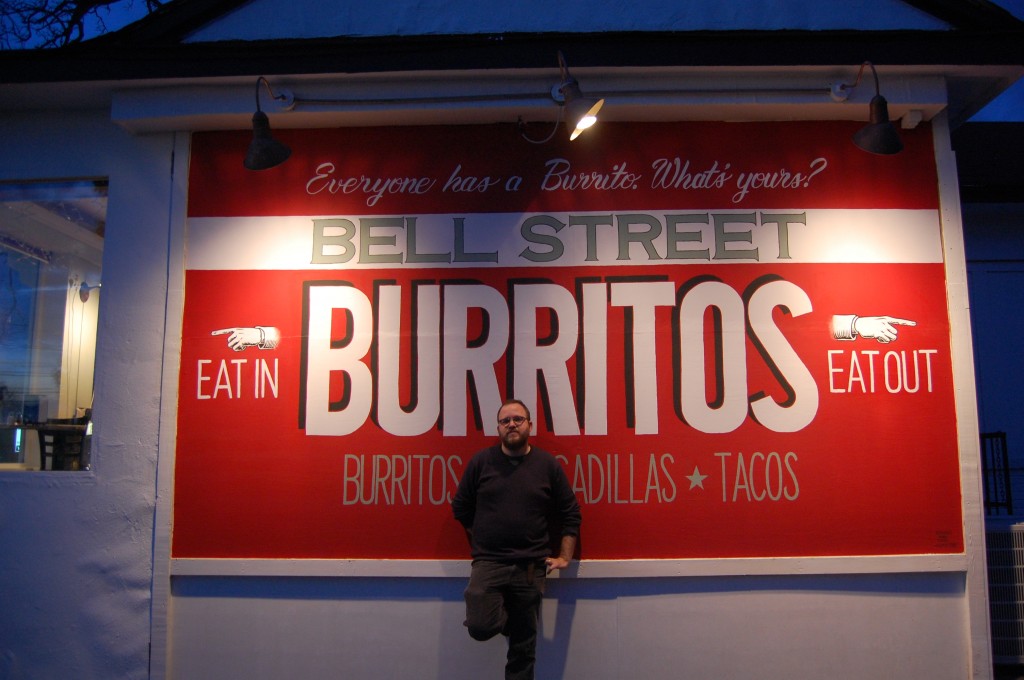 Any city worth its margarita salt has its signature burrito restaurant, that place locals love and tourists don’t know exists. In Atlanta, for many restaurant-goers, that place used to be Tortillas. Matt Hinton hopes to create a Tortillas-esque restaurant with the opening of his place, Bell Street Burritos.

As popular as the burrito joint was, it closed in 2003 after being in business for 20 years. Tortillas regular and aspiring entrepreneur, Hinton said the craving for a Tortillas burrito was so unbearable that he decided to take the matter into his own hands.

Hinton was a professor of religion at both Morehouse and Spelman colleges. When the economy started to collapse, he wasn’t able to instruct the classes he had been hoping to teach. He also realized he needed to make more money to support his family.

Hinton decided to sell Tortillas-style burritos to his friends on the side to make some extra cash.

The day Tortillas closed, the restaurant released its recipes for the items on their menu. Hinton realized they were incomplete and saw many holes and gaps in the recipes he needed to fill.

Hinton said he attempted to hunt down every missing ingredient but then decided to just add his own personal flair instead. The burritos he made still contained the essence of Tortillas but  not the identical ingredients.

Selling burritos, however, was the kind of job that required a huge time commitment. Hinton realized he would have to completely commit to this new business or give it up.

“I knew it was illegal [to sell burritos without a permit],” Hinton said. “I did it anyway, but a little after I’d started, a food critic got a hold of my story, which made it difficult to work under the radar.”

Hinton said he then had two options: either close up shop or get legal. He chose burritos over the books. He stopped instructing altogether so he could spend more time at his new restaurant, Bell Street Burritos.

“The hardest part about opening the restaurant was the time commitment,” Hinton said. “I averaged about 18 hours a day overseeing the beginning months of construction.”

The hard work paid off. Bell Street Burritos received an enthusiastic response from its customers. One month after opening, the Howell Mill location had attracted a group of regulars, including Schuster, who has visited it at least a dozen times already.

“It’s almost like Tortillas risen from the dead,” Schuster said. “The food is just great; it’s fresh, unique, and tasty and really cheap.”

Even though Bell Street Burritos has many distinguishing features that separate it from Totrtillas—including cleaner bathrooms in Schuster’s opinion—and an expanded menu,  the restaurant drew the attention of former Tortillas regulars looking for a new laid-back and local burrito restaurant. Bell Street Burritos has caught the eyes of many families looking for a kid-friendly place to eat, which is exactly the type of restaurant Hinton said he wanted to create.

“It’s not a run-of-the-mill burrito place,” junior Sophie Maschinot said. “It has a down-to-earth feel to it. It was really homey. the employees were all very friendly and made you feel comfortable.”

Hinton also acknowledges that working isn’t the only priority in his employees’ lives, giving his workers Sundays off.

“Everyone needs a break sometime in the week, I don’t want to make my employees choose between church and work if they

are religious,” Hinton said. “I know we’d make a bigger profit if everyone worked on Sundays, but there’s more to life than money, and I think that’s important to understand.”