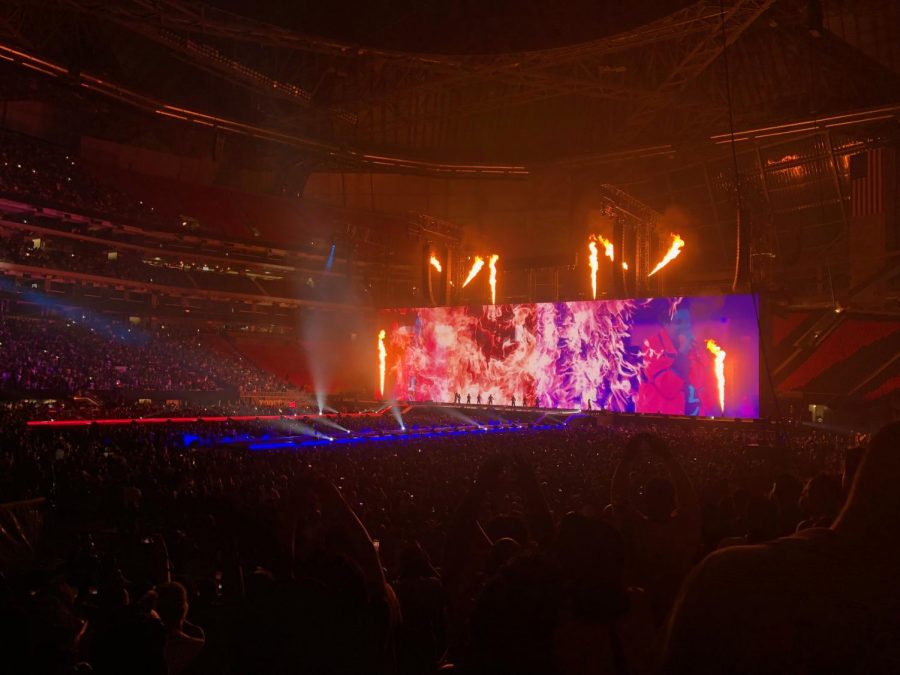 The stage opened up to show a live band and included two runways, fire effects, and strobe lights.

Beyoncé and Jay-Z performed in Atlanta last weekend on their sold-out “On the Run II” tour. The famous couple performed  August 25th and 26th at Mercedes- Benz Stadium in front of thousands of fans. Beyoncé and Jay-z are no strangers to Atlanta,  having stopped here in concerts before, including the “The Formation World Tour” and “The 4:44 Tour.” Beyoncé even opened the Sunday show calling Atlanta “our second home”.
Once you stepped into the stadium, you could feel the excitement. Everyone around me knew all the words to every song and some even knew the choreography, creating a group of dedicated fans that seemed to have followed the couple since Beyoncé’s Destiny’s Child age.
Atlanta Native sisters Chloe X Hallie, who are signed under Beyoncé’s record label, opened the show, followed by DJ Khalid. DJ Khalid brought out different special guests each night, among which were Ludacris, August Alsina, and Lil Yatchy. Celebrities like 21 Savage and Normani were also part of the excited crowd.
The lights cut off and the show opened to the tune of “Holy Grail,” with Beyoncé and Jay-Z descending from an opening in the top of their huge stage. As soon as Beyoncé starting singing Justin Timberlake’s verse, the crowd went crazy screaming, jumping, and even crying.
The couple performed  each of their biggest hits like “Formation” and “Song Cry,” but they also performed songs together like the pop classic  “Crazy in Love,” and newer songs off their latest album “Everything is Love,” like “Black Effect.” They even took it all the way back to 2003, performing their famous “03’ Bonnie and Clyde”.
The music was a blend of fast and slow songs. Jay- Z would come out and hype up the crowd and then Beyoncé would come out and sing a slow song, like “Resentment.”This was my favorite part of the show. Yes, the jumping up and down and dancing was fun, but during this moment, the 22 time Grammy winner took time to really connect with her fans. During the song, she sat down at the end of one of the runways in a flowing dress and sung from her heart.
Mrs. Carter had tears in her eyes as she referenced her husband cheating, all the while delivering gorgeous vocals that made you question whether it was even a live performance. Throughout the song, you could see Beyonce gain more confidence, implying that the woman Jay-Z cheated with was unattractive and called her “desperate”. The crowd responded by cheering and encouraging her. At the end of the song she mouths “I love you guys” as she held back her tears.
The history and intimacy between the couple was what really made the show special. Beyoncé would mouth the lyrics to Jay-Z as he rapped, or Jay-Z would hype her up as she danced, never creating a dull moment. This added to the fire, lights, a live band, dancers, and costume changes all made the show seem new and exciting after each song.
One of the last songs the couple performed was “Young Forever” atop part of the stage that broke off and rose into the air, moving across the VIP “Club Carter” section in between the two runways. Beyoncé transitioned to her verse of Ed Sheeran’s “Perfect Duet,” as she and Jay-Z held hands and looked into each other eyes romantically.
In the background, a giant screen showed home videos of their daughter Blue Ivy Carter and twins Rumi and Sir Carter, along with sweet moments between the couple, like them renewing their vows. During costume changes, the screen also displayed videos the couple filmed a few months before the show started, most of which took place in Jamaica.
As the show came to an end, however, the most unexpected thing occurred. Beyoncé and Jay-Z were leaving the stage after thanking everyone when an intoxicated fan managed to jump on the stage, get past security, and almost reach the couple. Before he could, the security and Beyoncé’s male dancers managed to tackle the man, creating an exciting spectacle as fans exited the stadium.
Even though there was a dramatic end to the show, the concert was overall an enjoyable experience. Beyonce and Jay-Z are two artists that many young and old entertainers look up to. Their performances set the bar for many artists, and this show lived up to the high expectations they set for themselves and others. They only have a few stops left on their world tour, ending in Seattle, Washington on October 4th.